Feted as the inventor-founder-editor of The World of Interiors magazine, in later life Min Hogg reinvented herself as the proud designer of an exquisite range of seaweed pattern wallpapers. Professionally she was often fierce, but her private life was a quest for whatever was original, funny and joyful. Molly Alexander remembers the hilarity  – and the exactitude. 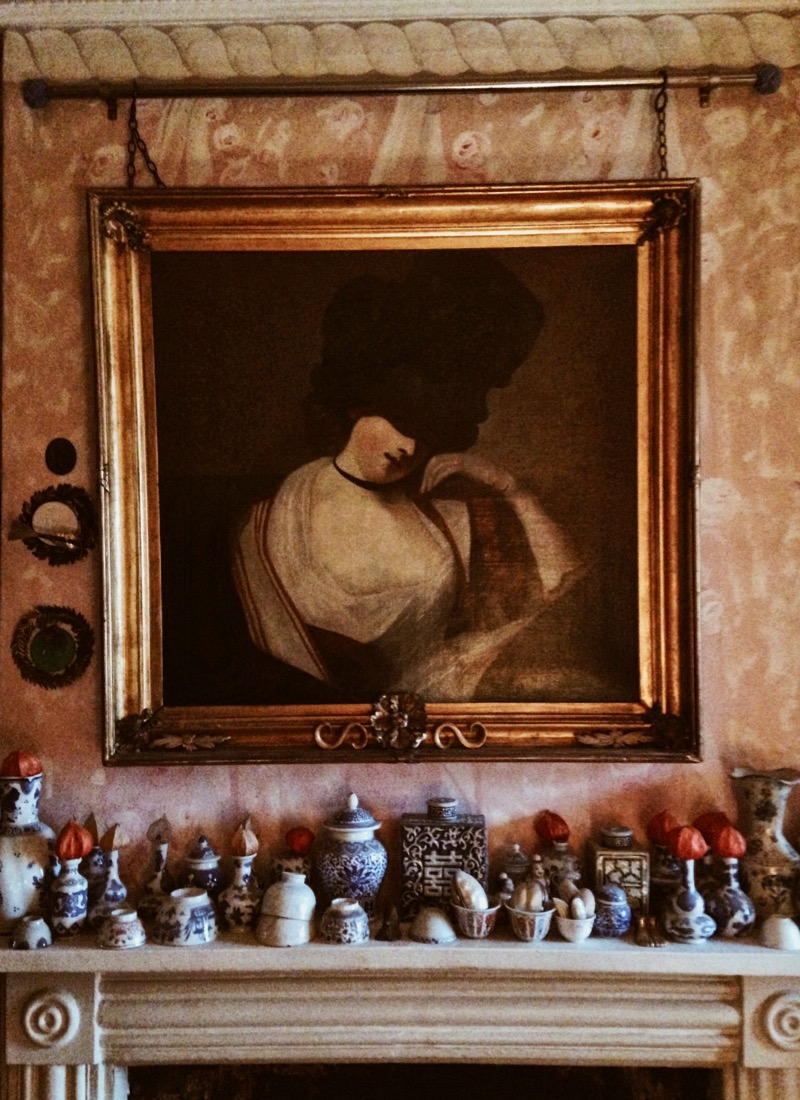 Arriving at her top floor flat in Knightsbridge, Min laughed at me for being scared of the notorious antiquated finger-trapping lift, a derisive snort and delighted grin showing the generous gap between her teeth, her much loved ‘dent du bonheur’. Most nights we would drink claret and smoke cigarettes, which I would I be sent down to fetch from the glovebox of her car. There was something exhilaratingly furtive about the swirls mixing and swimming about the murky pink walls, and a certain dusty and pleasingly timeless air lingered. 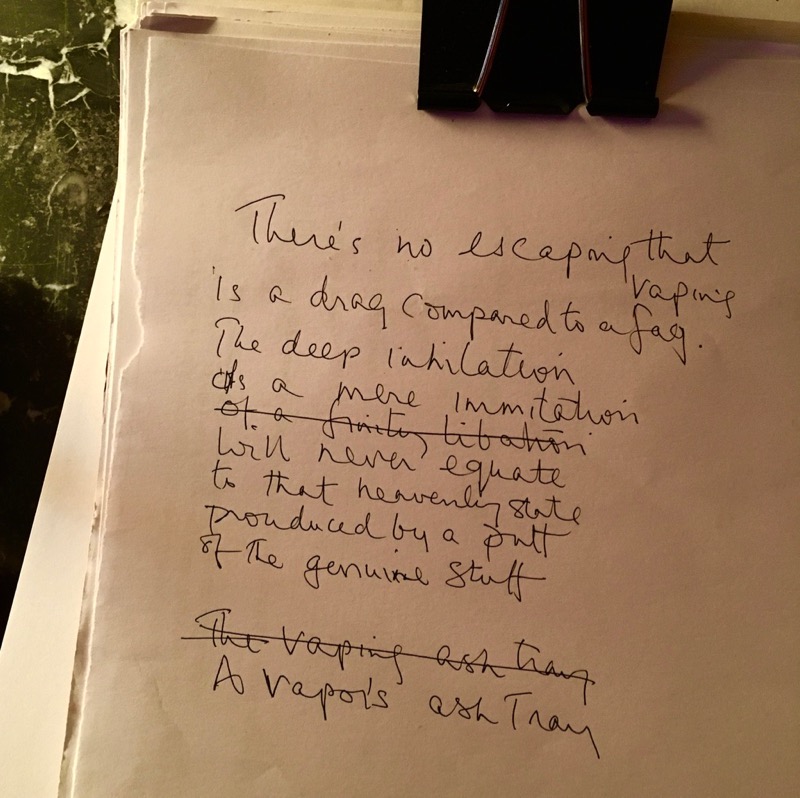 A Vapor’s (sp) Ashtray. There is no escaping that vaping, / Is a drag compared to a fag. / The deep inhalation / a mere imitation / will never equate / to that heavenly state / produced by a puff / of the genuine stuff.     Min Hogg, 2019. 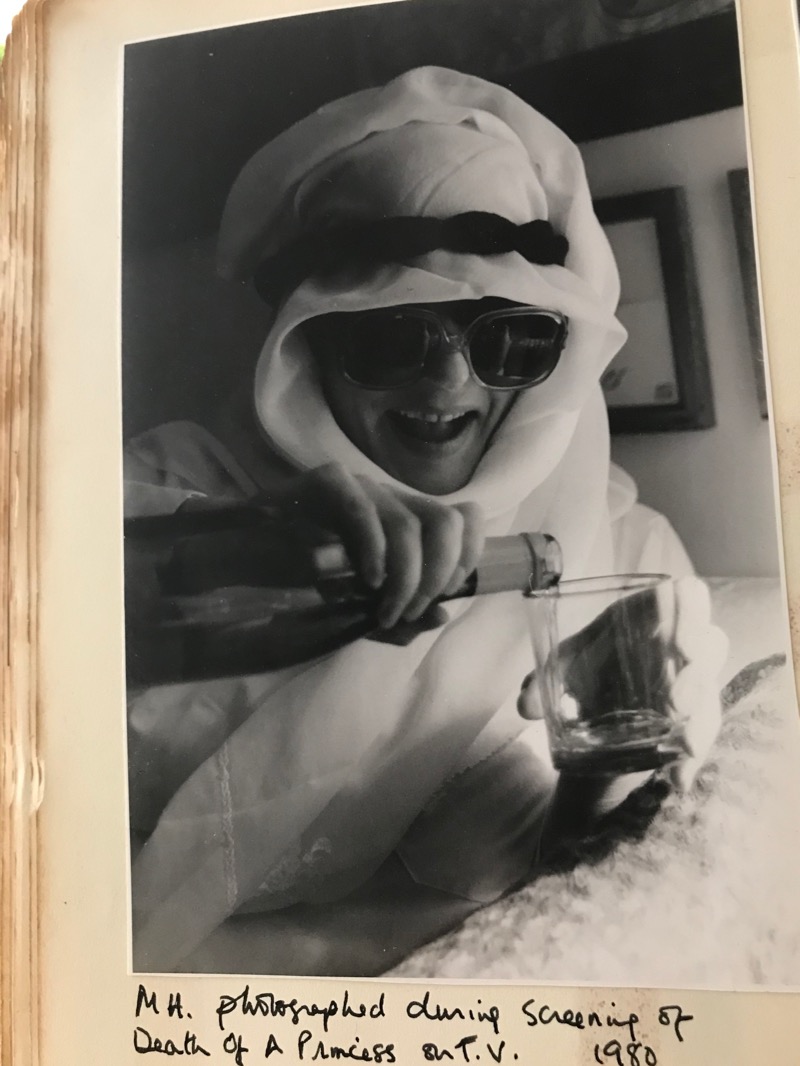 MH pictured during screening of Death of a Princess on TV 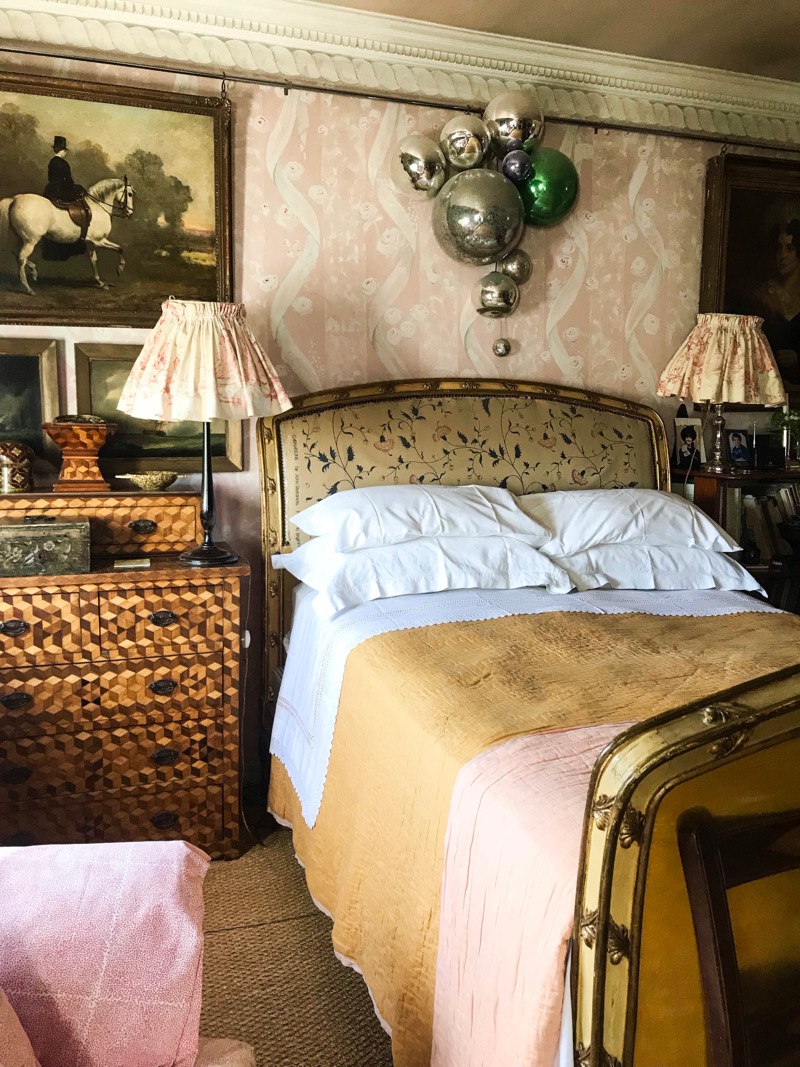 We spent a lot of time draped in her bedroom, the hand painted walls with rope-twist cornice based on a row of teeth she saw painted around the ceiling of a dentist’s waiting room. She regularly tipped ash and detritus onto the logs of the gas fire to improve its grub, and toasted coffee beans on a piece of tin foil on the hob to rid the flat of tobacco smells. 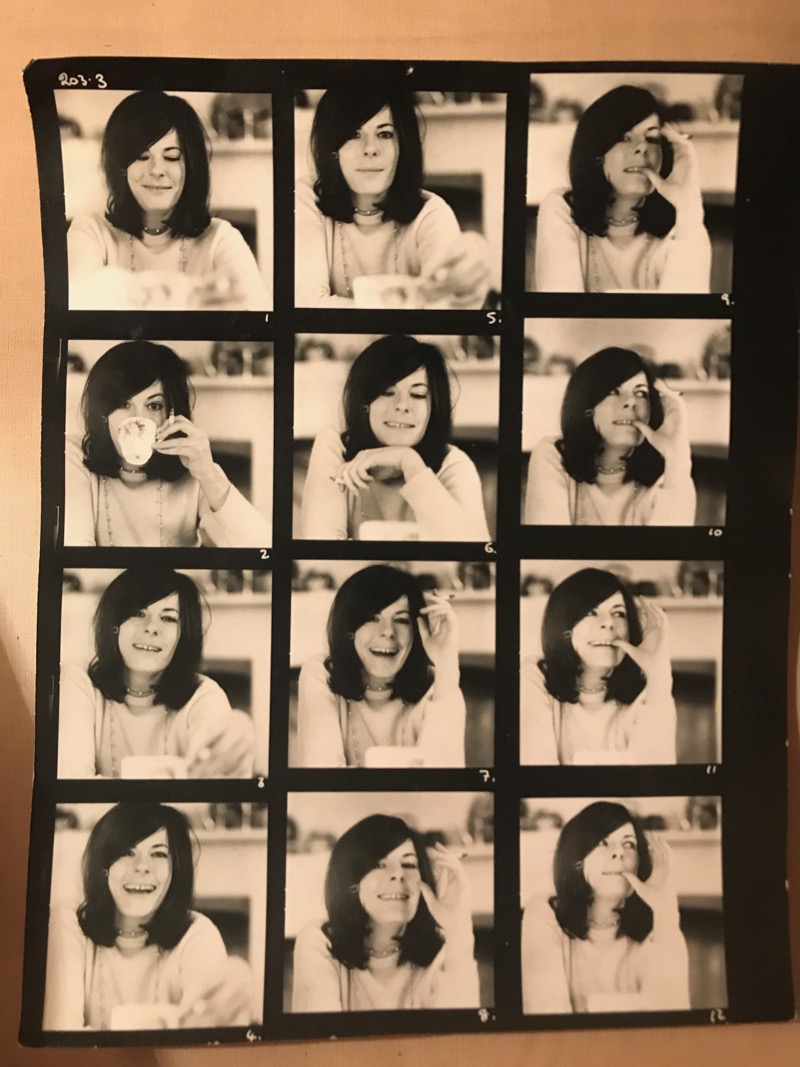 When torrential rain came cascading through her beloved blueprint of smoke-stained cracks in the ceiling, she conducted me like a grand maestro from her bed, and gesturing with her magnifying glass I was commanded to construct an elaborate dam out of green gingham tea towels (cut originally from a curtain) and buckets fashioned from Le Creusets. As the water filled the pots, creating satisfyingly different pitches as the drops fell, we named it ‘The Symphony of Wobert’s Wug’ – an ode to our attempts to save the Persian runner that (I think) she pinched off Robert Kime. 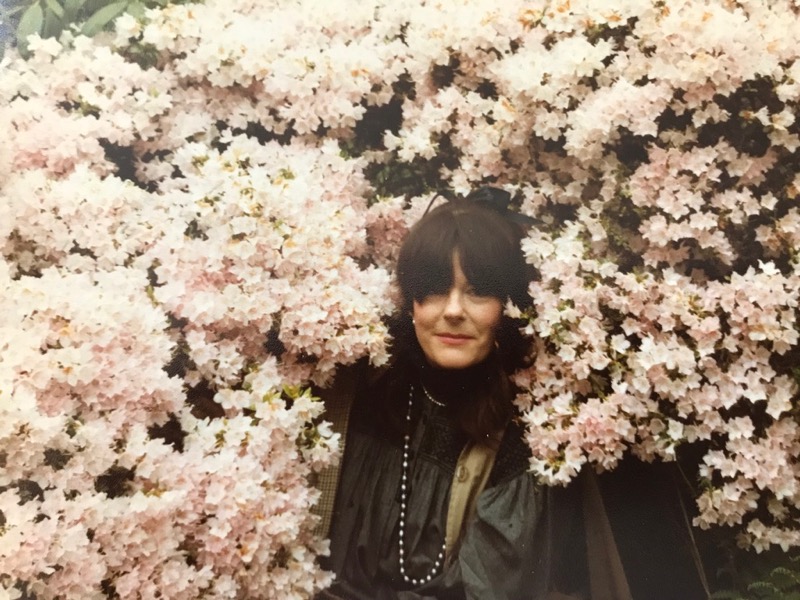 Min would produce treasures for us to pore over (a book of 18th century French silk ribbon fragments, a ramshackle collection of Roman glass, wafer thin dried seaweed specimens) and carefully lead me through her piles of Dulux paint charts, each favourite labelled so as to conjure a colour exactly from memory (broad bean, end of a fag butt, Bouillon, champagne cork). Weighted perfectly in her hand was her kidney-bean-shaped silver lighter, a cluster of ‘pinks’ (they were by far the best petrol station flowers) always on the table, and the long Camel Blue ash dangled perilously above an empty film canister. I am reliably informed that an assistant at Interiors once purchased an electric fan, positioned atop the desk to divert lingering smoke and constant puffing – I’m sure that Min just blew harder. 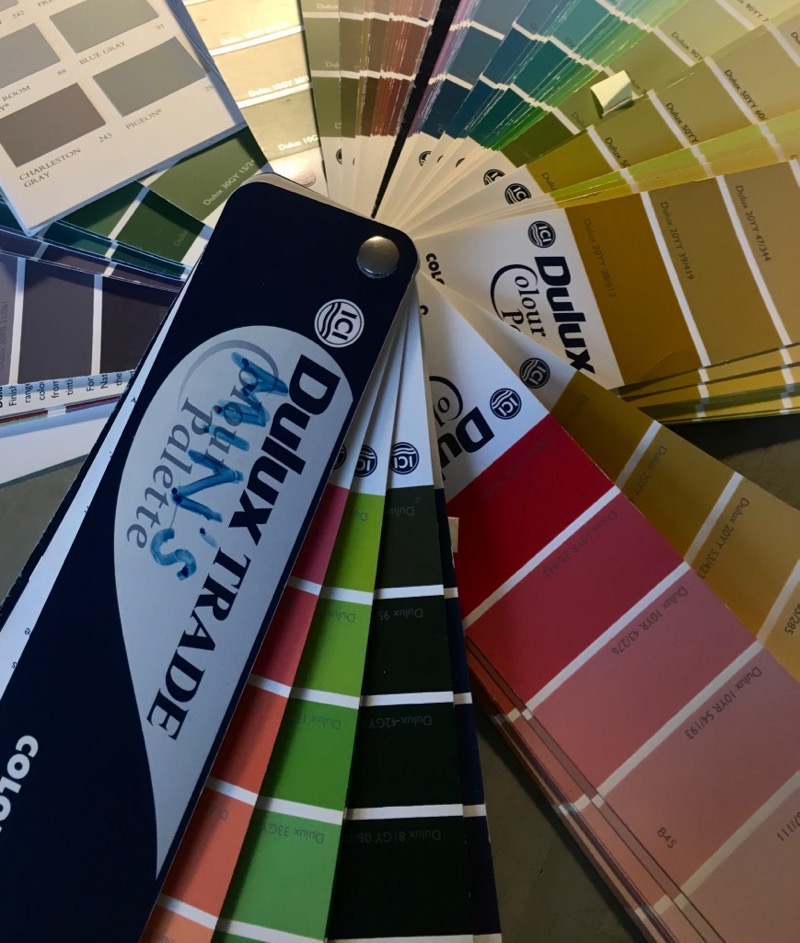 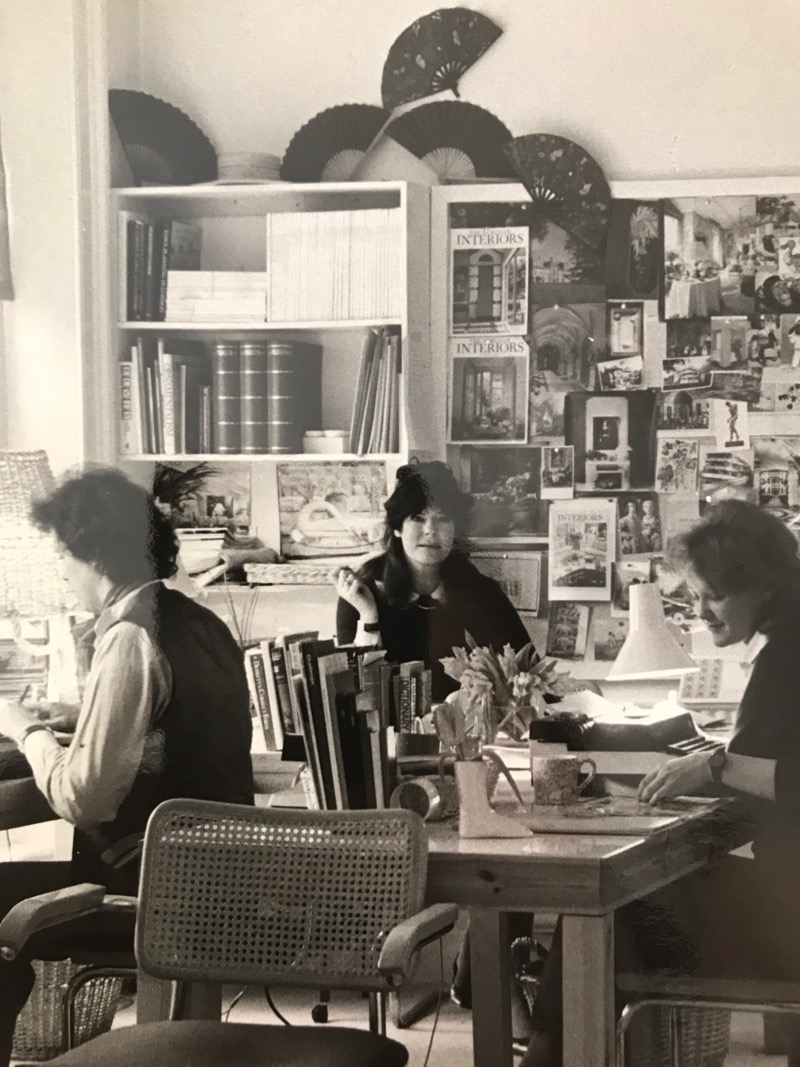 She created miniature Interiors shoots, fiercely directing me from the top step of the landing, photographing with my iPhone against the pale turquoise walls – the light was best there, pouring in off the dome of the Brompton Oratory she used to call it ‘God’s Light’. A favourite shot was an assembled pastiche of a William Nicholson still life, with frozen peas for scale. People say she coined the phrase ‘shabby chic’ – she was never particularly fond of what that association became – but instead insisted that she, of course, ‘invented’ the use of objects for scale. In the reams of photo exchanges between us (in old age she was a dab hand at emails, and embraced Instagram with surprising gusto – she was, I mustn’t forget, an unabashed and unabated snooper), she always insisted upon the inclusion of a ‘foot’ for scale – failing that a roll of gaffa tape or a lemon, or a 10p piece if judging the merits of a pattern repeat. 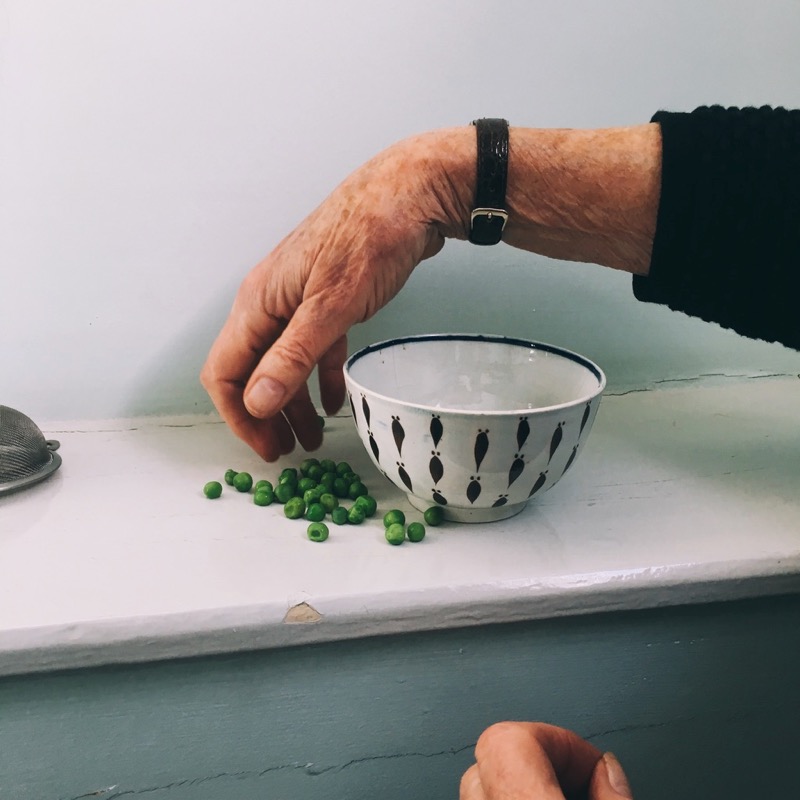 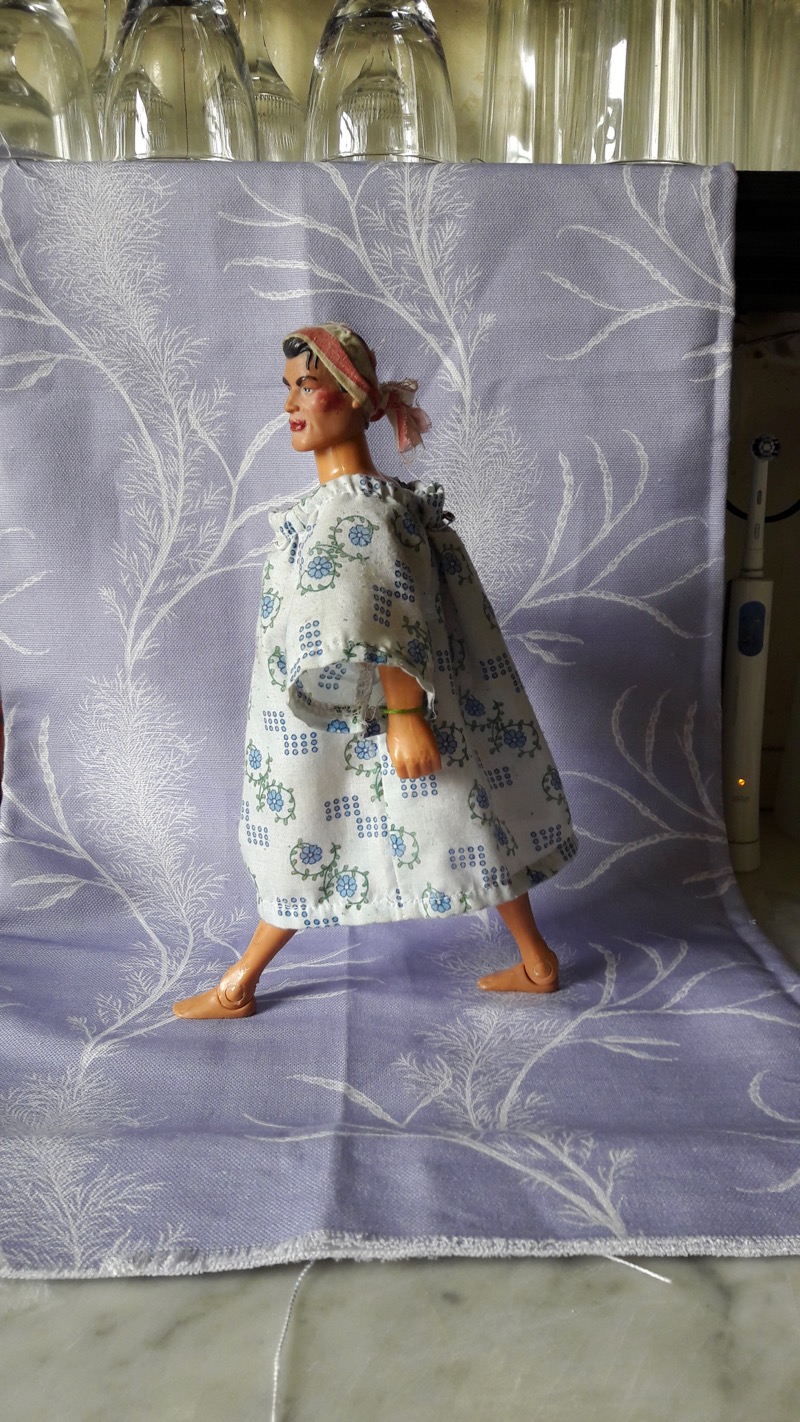 When discussing one of her new wallpaper designs, she told of her disappointment at plucking seaweed from a Scottish rockpool, for its ethereal tendrils to instantly shrivel and collapse, and set out detailed instructions on the best method of preserving these silky specimens – lifted carefully from underneath using copious amounts of Bounty kitchen roll and a plastic nit comb cut in half. She loved even more stumbling upon the accidental: when wrapping a friend’s birthday present, she noticed the underside mitred folds of the blue and white striped Conran shop wrapping paper, immediately photocopied its bottom, and delivered it proudly to me at work in a plastic folder, captioned with instructions (reminiscent of Interiors’ supplementary napkin folding manual) on how we were to completely repaint my bedroom – both walls and ceiling – to this happened-upon design. 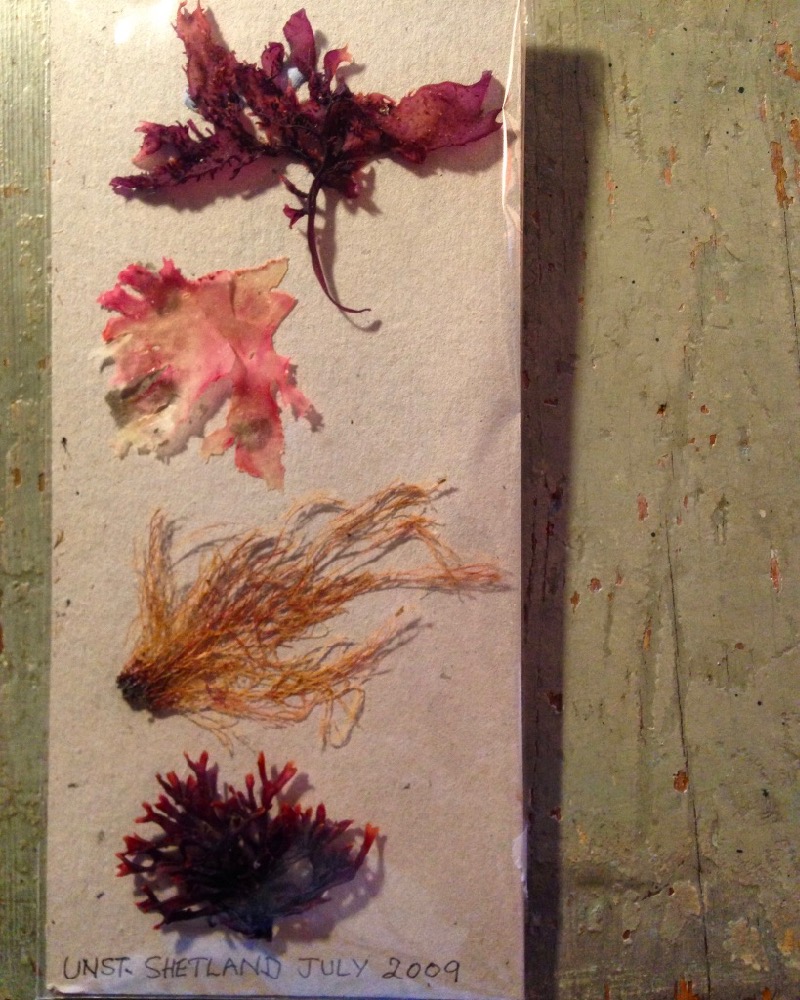 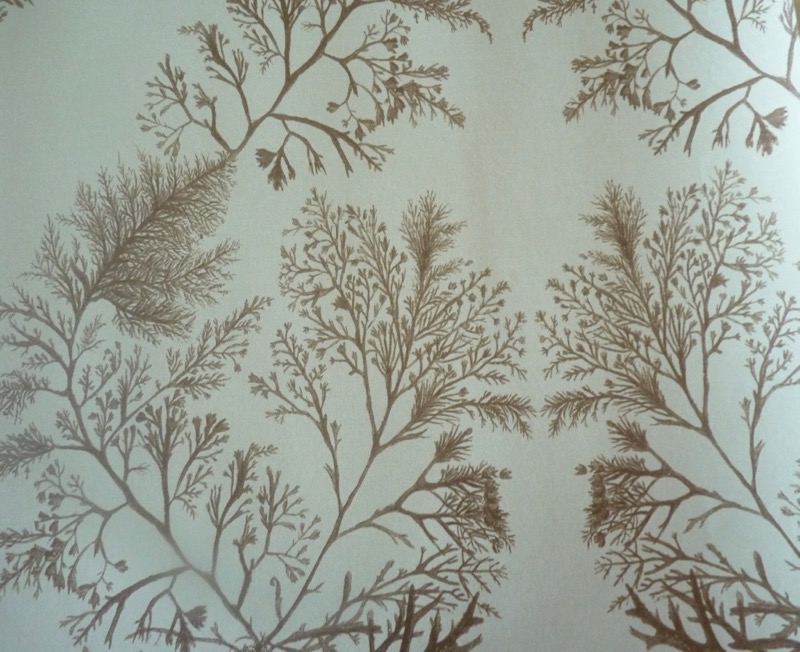 I would spend hours leafing through her photograph albums, now my most treasured of her possessions, weighty tomes with worn marbled paper covers showcasing a patchwork of collaged images – all meticulously captioned with examples such as ‘the day we went to three stately homes in an hour’, several images of handsome men draped over grand chintz-covered-bullion-fringed sofas, and makeshift verandas on remote beaches. 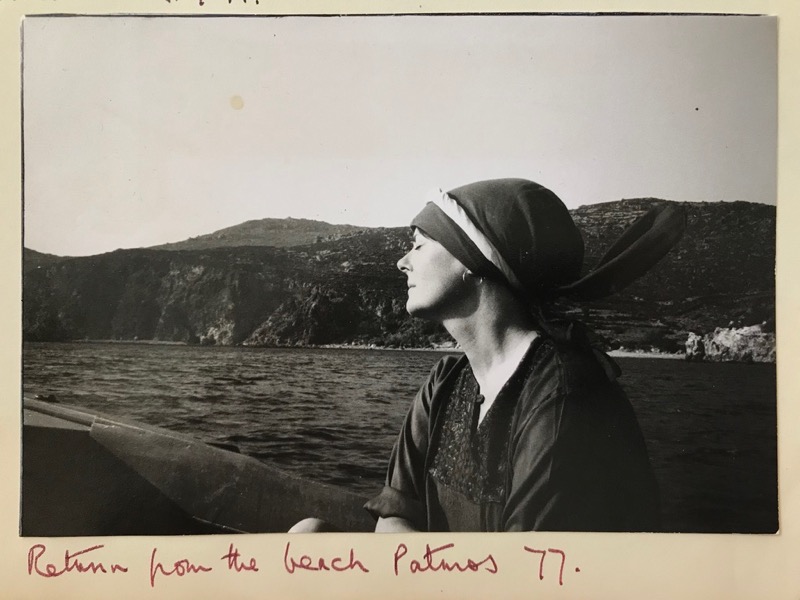 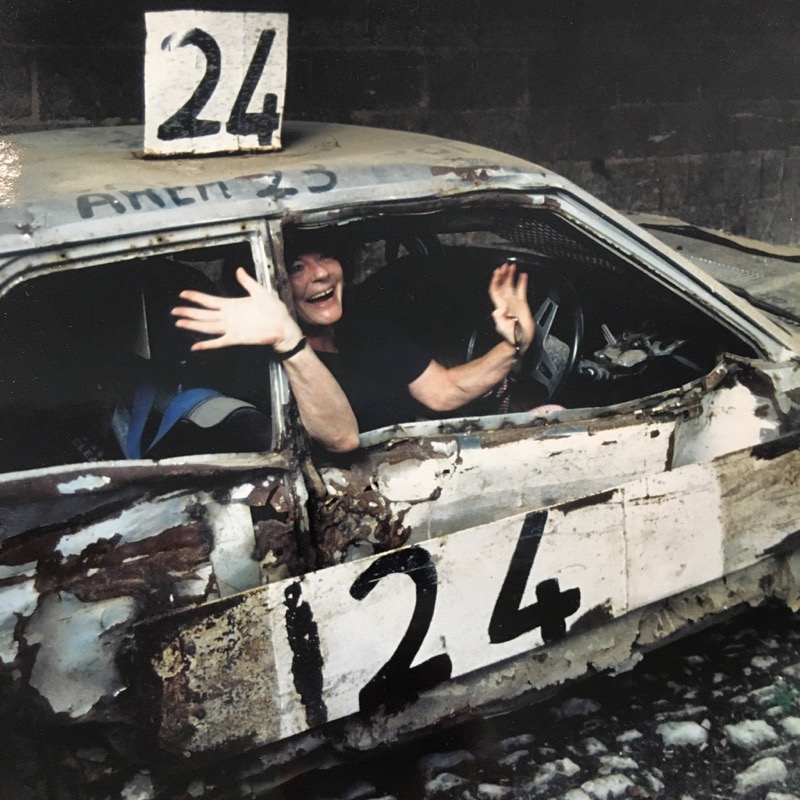 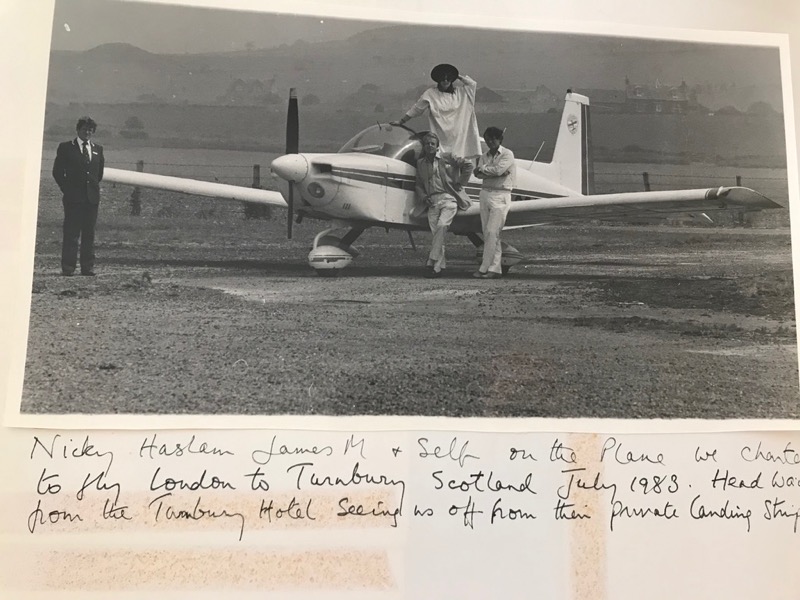 MH, Nicky Haslam and James Mortimer on the way to a wedding in the plane they chartered to fly London to Turnbury, Scotland, July 1988. ‘Head Waiter from the Turnbury Hotel seeing us off… ‘ 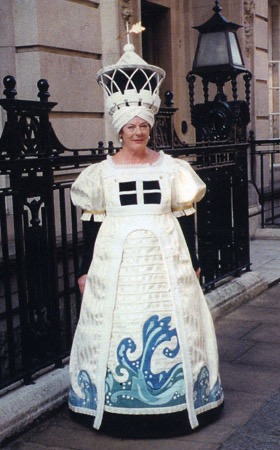 Dressed as a Lighthouse for Queen Mother’s 100th Birthday 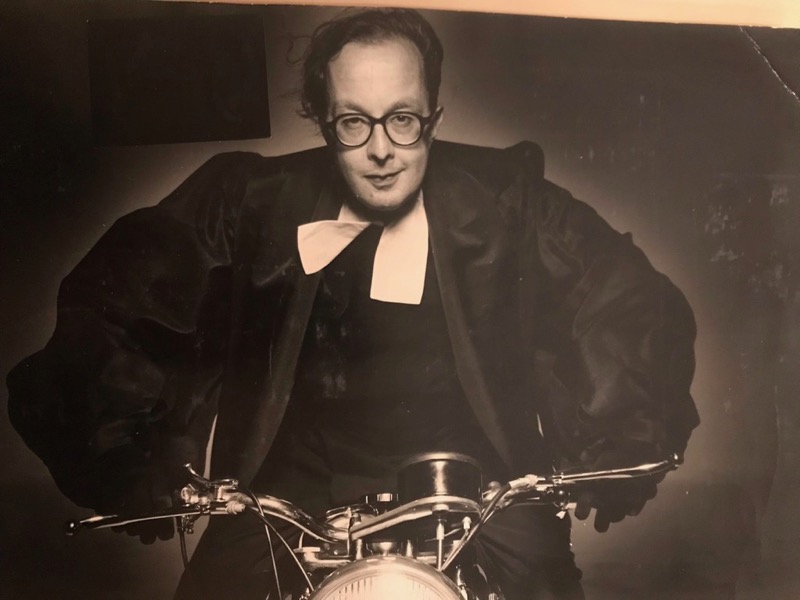 Days documented from a hazy sixties Soho flat, including dastardly photographs of the ‘Vicar of Soho’ (Nicky Haslam tells me he was called the Rev. Charles Sinnockson) who, despite being gay, proposed to Min with a diamond ring that she then promptly lost. 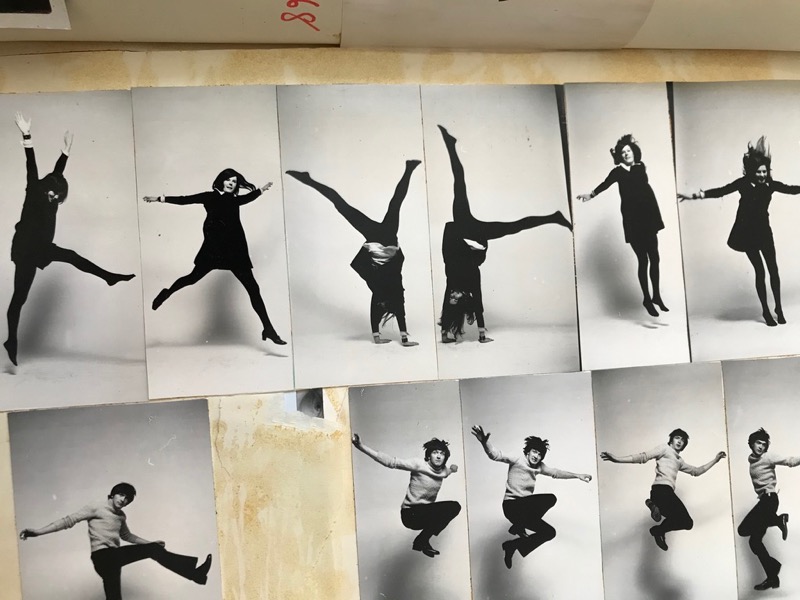 In my early twenties, sensing my aesthetic leanings and seeking out a suitor for me, she fixed me with her gimlet eye and expressly forbid that I fall for ‘those very chilly neo-classical places that some single men have…precision hell’. All lovers required an originality of eye and mind. I begged and begged to borrow a knife-pleated bell-sleeved gold coat for a party, and once I had finally wrestled it from her knotted fingers, she insisted I bring it back the very next day as she had once snogged Lucien Freud in it. 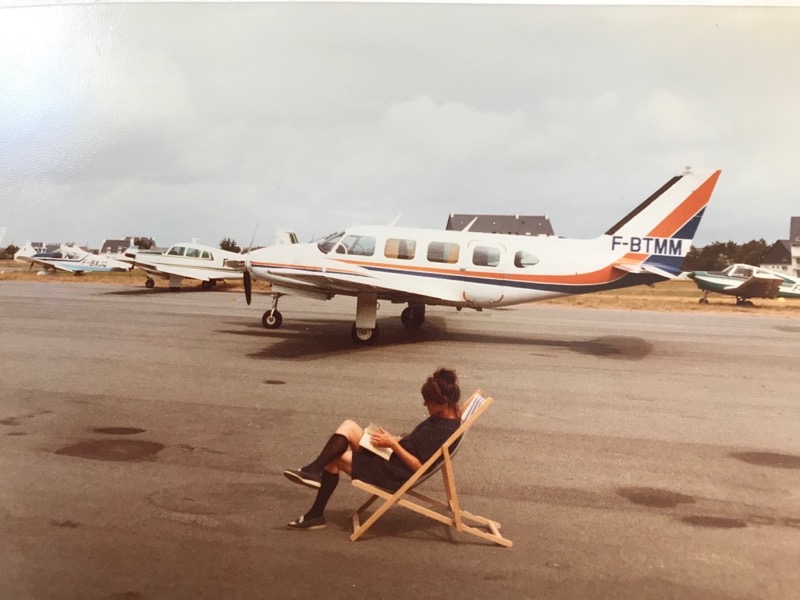 In the last ten years of her life she became my impossibly youthful friend, infectiously conspiratorial and almost entirely impervious to public embarrassment. One winter’s evening at the Soane Museum (‘worth it simply for the shadows by candlelight’) we snuck upstairs to the top floor and got caught by an anxious steward as we were trying, unsuccessfully, to get into Soane’s bath – I was desperate for a wallow in the great man’s tub. 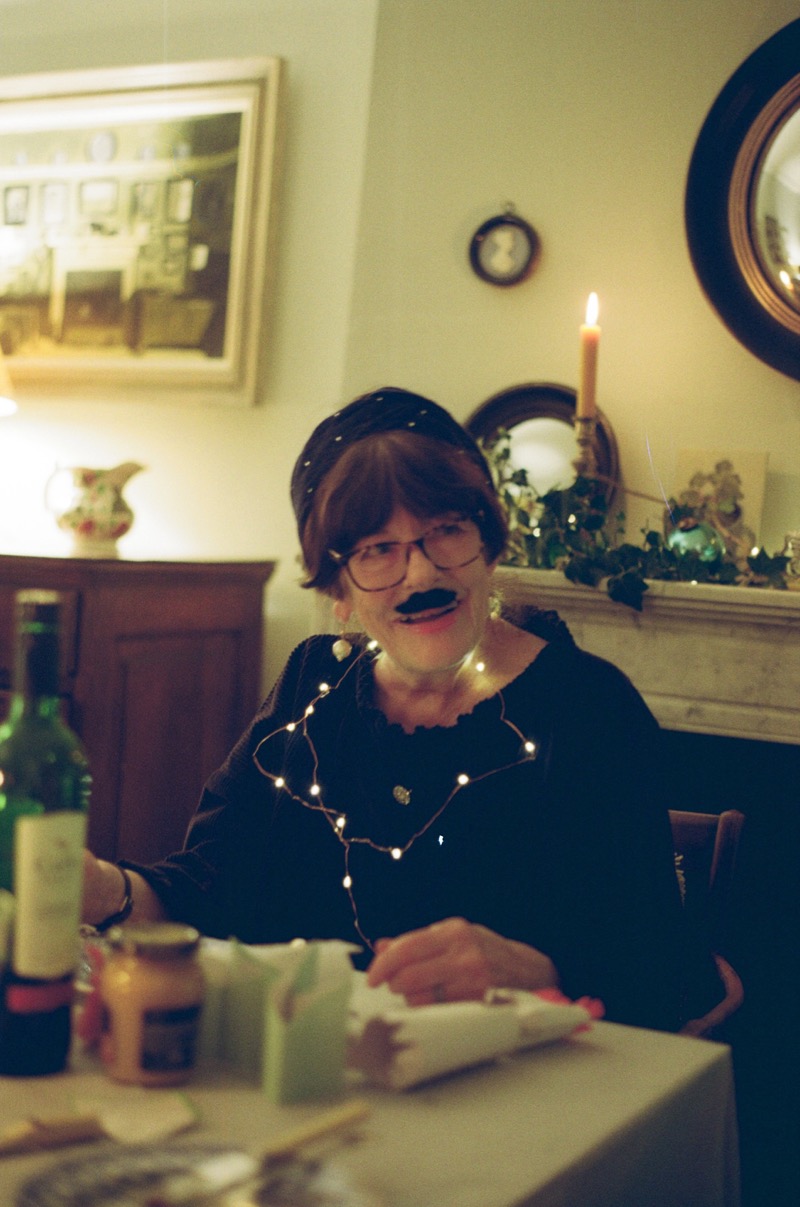 Last Christmas, with moustaches she brought for the table

Escorted downstairs, she revealed to me that she was convinced that hidden under its heavy mahogany lid was the staff’s stash of unsightly Pret-a-Manger sandwich wrappers. Her deep and raspy laugh echoed around the winding staircase, a testimony to a life’s dedication to nicotine, and to breaking the rules. 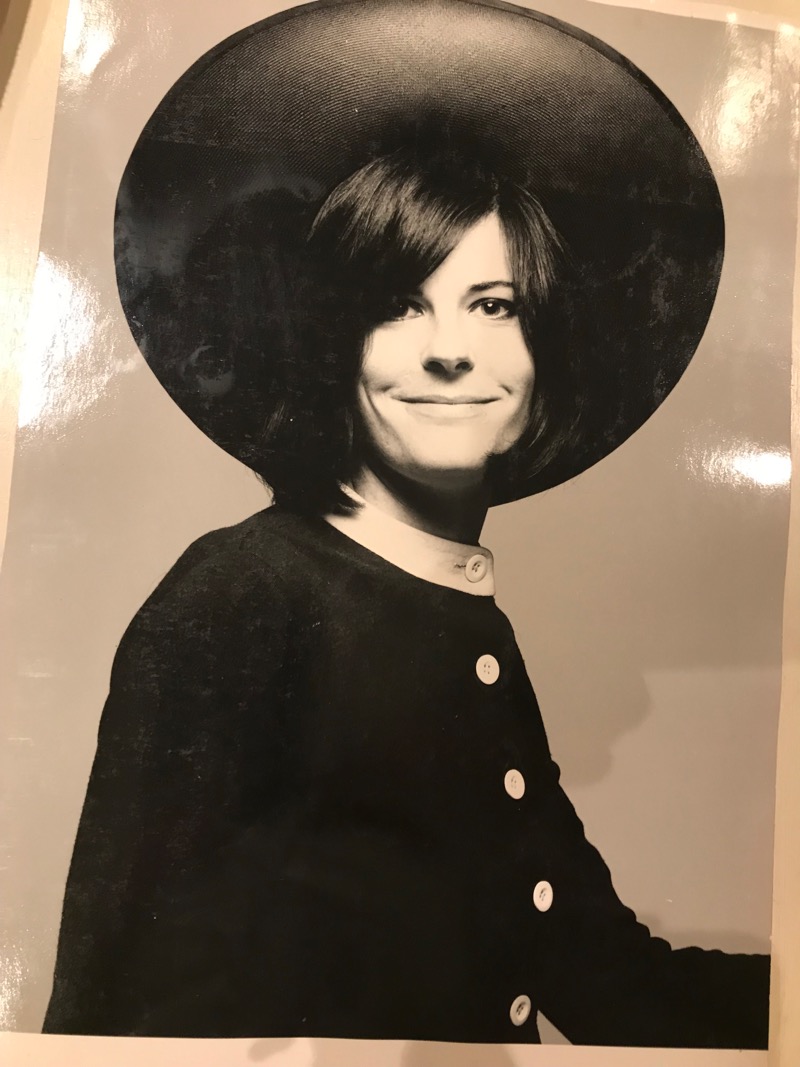 And – many more pictures and story at : https://bibleofbritishtaste.com/min-hoggs-world-of-interiors-seaweed-wallpaper