Min Hogg lives round the corner from the V and A and the Brompton Oratory. She is the creator and founding editor of the World of Interiors magazine, generally considered to be outstanding in the western world. Interiors (as it was originally called) launched in 1981 above a florist’s in the Fulham Road. It focused on startlingly beautiful things, all taken from a list of places she ‘knew from life.’ The magazine was so successful that within six months of its inception, Conde Nast offered to purchase it.

In 1983 she described her approach as celebrating homes personalised by their residents rather than interiors created by professional decorators.

‘The one hanging at the top is an Italian funeral citation.’

How old were you when you met Nicky Haslam. Was he your best friend? ‘Yes, by miles. We met at a deb dance in the country, we discovered he lived round the park in Cumberland Terrace. Then we saw each other all the time, he was still at school, his mother thought it was quite a good idea.’ In his autobiography, Redeeming Features, Nicky remembered, ‘ She had long dark hair, rather naughty eyes, and the tiniest gap in her front teeth. It gave her smile a special attractiveness… she became then and there, and has remained, the closest, most beloved person in my life.’

‘I had to smuggle Nicky past my father, in case he saw Nicky. He was wearing … vaguely gay … winklepickers? … I can’t remember.’ Her father was a personal physician to the Queen.

She is good at stripes

This little needlepoint cushion worked by Min’s mother. ‘It was my mother Polly who awakened my love of all things beautiful.’

Miniature watercolour bedroom mantle-scape painting by Min, porcelain she has collected on trips to China, Egypt, Persia and Holland.

The kitchen. ‘My belief about kitchens is that absolutely everything must be on show.’

‘Nicky [Haslam] rang one day and said, Oh you know about colour and patterns, I’m trying to find a wallpaper for a client.’ He gave her a C18th portfolio of  botanical seaweed to source her designs from. ‘And we never did it. But Michael and I [Mike Tighe, the former Art Director of The World of Interiors] just couldn’t stop, we went on and on, so then we found we’d got a collection.’ The Seaweed Collection is at minhoggdesign.com

‘Designing the collection took quite a long time. And then we had to find a printer. I would scribble because I’m not computer savvy, and then Mike had to reproduce one bit of seaweed over and over and over again to get the curves.’

What’s the best seller? ‘At the moment it’s the Feathers, it was much, much smaller originally. They re all real, real seaweed engravings, but there may be more than one seaweed in a pattern. We did repeats, we learned how to do it by doing it, me and Michael. The way we did it, we made it solid-er, so they look like block printing.’

How long did it take you to get the colourways right? ‘Ages! Ages and ages. Every time they change the paper or they change the ink we have to start again. But we don’t change the colours to keep abreast of fashion at all, fuck that. I’ll do what I fancy at the time.’

‘We didn’t bother to discover what the standard size of wallpapers was, we did all our designs any size we jolly well liked. Which means it’s terribly awkward in some ways.’

‘That’s what we’re working on now, putting them [the seaweed patterns] behind chicken wire, like the cupboard doors in my bathroom.’ Min’s bathroom.

Cupboard door panel in the bathroom.

More of the bathroom

Box of wallpaper samples in the bedroom.

Dining and work table in the sitting room. She has collected antique textiles since the age of eight.

Fabrics: https://minhoggdesign.com/Fabrics/  Linens cost from about  £40 a metre

‘It’s a family tree but it sort of takes them back to God.’

‘What did you have in your bedroom when you were little, did your mother give you lovely things? ‘Yes! Pictures. I had two bedrooms in the same house, because the nursery which was my bedroom became my parents bedroom. Oh no, I had three! We lived in Regents Park, Upper Harley Street. My mother always had very nice houses, but when she died this place was choc-a-bloc already, so I hardly took anything. A chair. Sad.’

‘This is Kitty Fisher, it’s by the Rev. Matthew William Peters R.A.’

‘I got it at Sotheby’s, I saw her from miles down the room. She was the absolute toast of London.’

A nice bit of chinoiserie lacquer.

‘You’ve worried me now, about my bedrooms. I only decorated once, a very nice ivy trellis wallpaper. I had blue hangings on the four-poster, that’s when I was at art school, the Central School, I was doing interior and furniture design. My idea was to be a window dresser. I never did it.’ The chintz on the bedhead is from John Stefanidis. Witch balls above the bed.

‘i once had to judge a window dressing competition in Bond Street with Roy Strong and Jean Muir, and when we’d finished, I said, ‘None of them were remotely interesting, don’t lets award the prize.’ But she said we had to.’ At the Central she had been taught graphic design by Terence Conran, whose wife Caroline proposed her for her first job in journalism, at Harpers. Min Hogg is very beautifully dressed; in the 70s she returned to Harpers and Queen as fashion editor.

‘That’s Queen Victoria on her blind horse. My mother got it in a sale, she just knew.’

‘Timner Wollard painted the wallpaper. She used to do rooms sets and backdrops for us, and then she and I concocted it together. That’s the best bit there, [in the right-hand corner next to the bed head], that’s before her boyfriend told her they weren’t going to Paris.’ 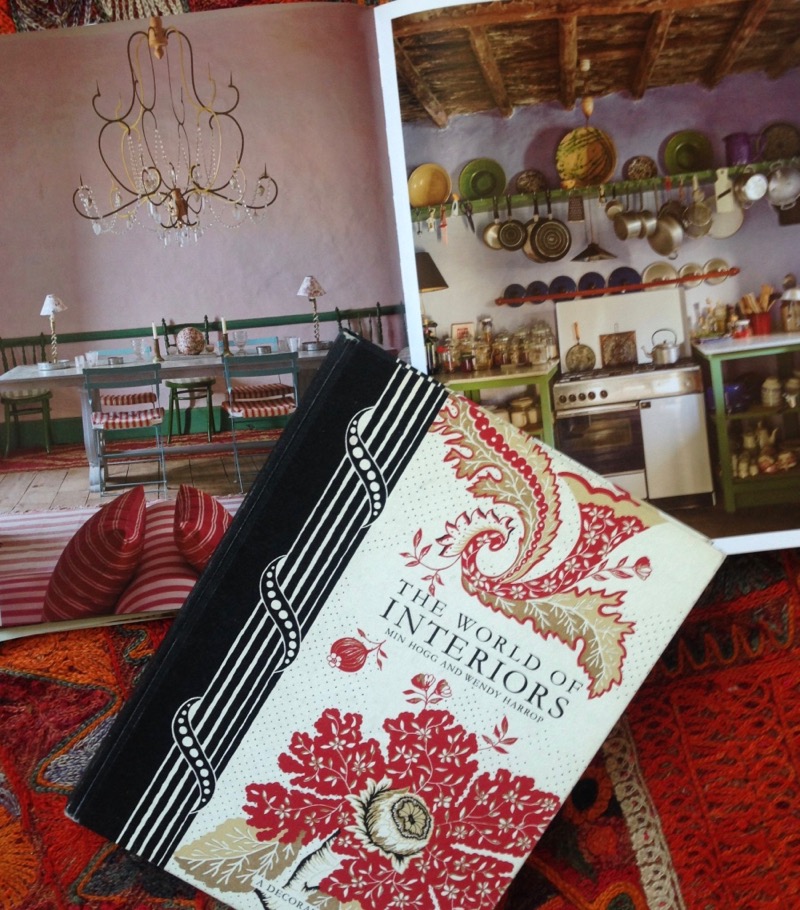 Min’s other house in the Canaries was photographed for Haute Bohemians by Miguel Flores-Vianna last year, Min and Wendy Harrop published this volume of the very best of the World of Interiors in 1988.  According to Nicky Haslam, ‘ Almost overnight the magazine lifted people’s attitudes to interior design by showing that the profession was not merely airy-fairy whim but one employing a vital grid of artisans, specialists and craftsmen. One of the earliest of Interiors featured the Chelsea flat I had recently decorated for Bryan Ferry…  Min put together a book with her choice of its very best articles. The party to celebrate the publication took place at Drayton Gardens, and noticing the alacrity with which the kultur maverns pounced on The World of Interiors: A Decoration Book, I saw the possibility of doing, someday, something along the same lines about my own work.’

Very many thanks to Min Hogg.