The Way We Live, Now.

‘Nothing much has happened to our house for about 20 years in terms of its look,’ says Christina Moore. ‘It’s not designed although I guess when we first put it together it was. We moved in here in 1984. Now it’s about managing the amount of stuff that we’ve got. I can’t bear taking things to charity shops that I care about, we’ve never successfully had a car boot a sale.I don’t know how to recycle things.

That sofa came from my grandparents, they were living in a block of flats near here after the war, and there was a big bombsite, and various things came from there. We had it reupholstered. I imagine its English, it’s not particularly old.’

The painting is of an ancestor of Roger’s, who who is descended from distinguished soldiers on his  father’s side and the Pre Raphaelite painter  John Everett Millais via his mother’s family, He bought the gothic tabernacle on the right with an inheritance.

But their house was last photographed in the 80s for the World of Interiors, and then featured in Min Hogg’s ‘A Decoration Book’  in 1988. Min used this picture in the chapter entitled, ‘Simple,’ and wrote there, ‘the chintz on the seats of the three matching chairs (found for £1 each) has been dyed black, but its original pattern still shows through, giving an effect of expensive damask.’ ‘That was the front room when we first moved in,’ says Christina. 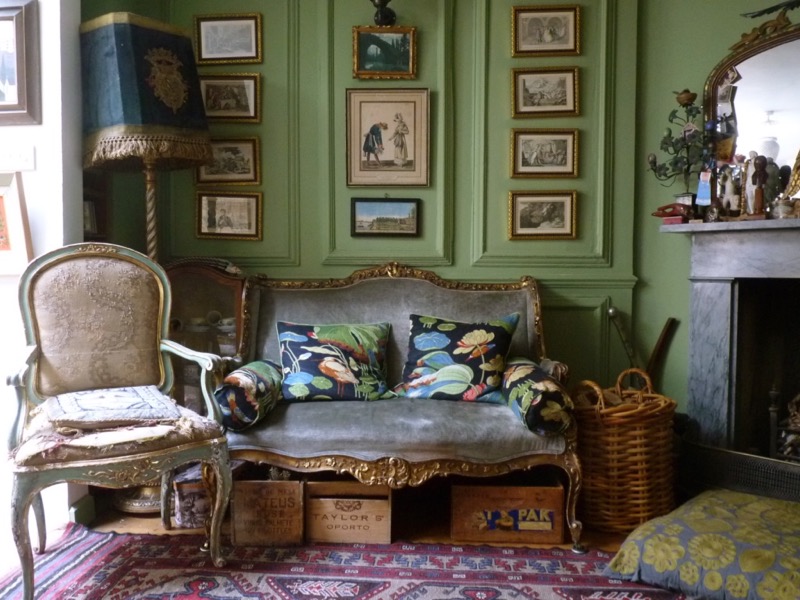 This is the Drawing Room, painted in Farrow and Ball’s Saxon Green. Or perhaps it is Cooking Apple Green? The Italian sofa came from Christina’s grandparents and they gave her the damask covered chair for her eighteenth birthday. The standard lamp comes from Roger’s family. Christina took the gold thread embroidery from another lamp shade and stuck it on this one.

Beyond is the modern extension, added 11 years ago. A friend who was an architect designed the kitchen. 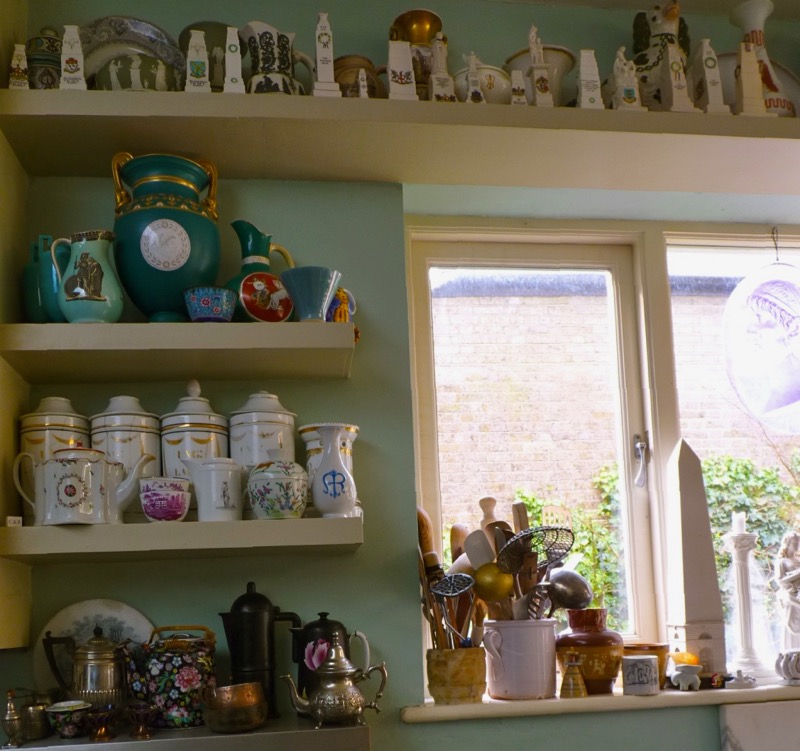 On a high shelf are dozens of china models of cenotaphs collected by Roger. Many of these are currently on loan to an exhibition in London’s Wellington Arch Quadriga Gallery, We Will Remember Them: London’s Great War Memorials. As Dr. Roger Bowdler of English Heritage, historian and Director of Designation, he is the curator of this exhibition, which runs until the end of November and is highly recommended. Below is a shelf full of French apothecary jars. 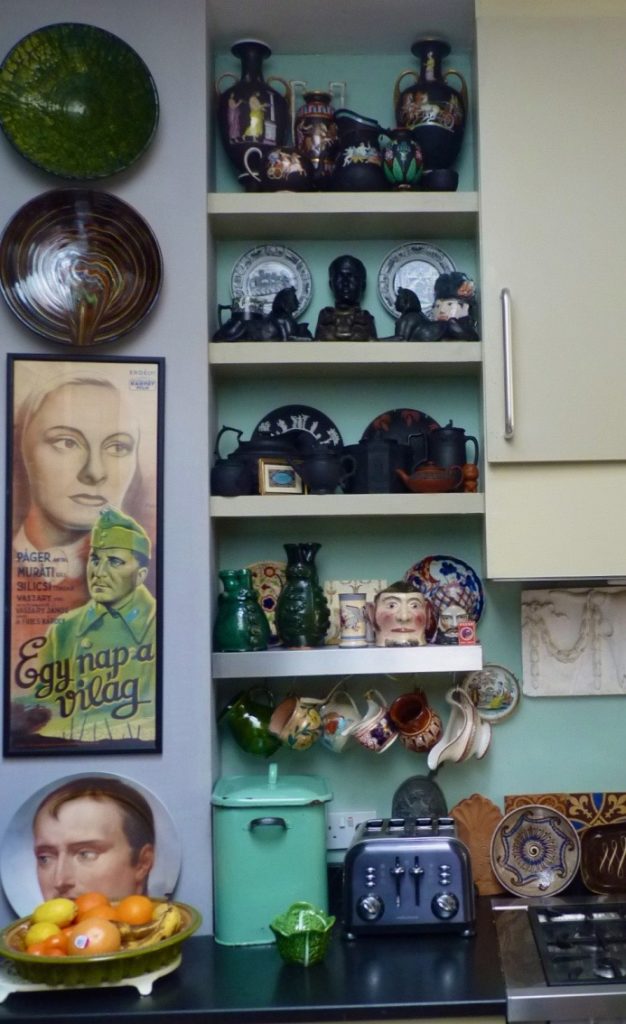 The Wedgwood black basalt ware was bought thirty years ago. Did you always collect stuff, I asked? ‘Yes, my parents were always going to auctions,’ said Christina. ‘I used to go to jumble sales all the time, mainly clothes, fantastic fancy dress stuff.  In the 1970s we lived in a road that had the Plymouth Brethren, Jehovahs Witnesses and a church hall, all in the same street.’

The plaster on the kitchen wall is an effect known as faux Elephant skin.’It’s really easy. You colour the plaster, you stipple it when its wet, and when its almost going off, you smooth it over and put linseed oil on it.’

The print above the lamp commemorates the  ‘Loyal Order of Free Mechanics,’ fellows of a Masonic lodge. 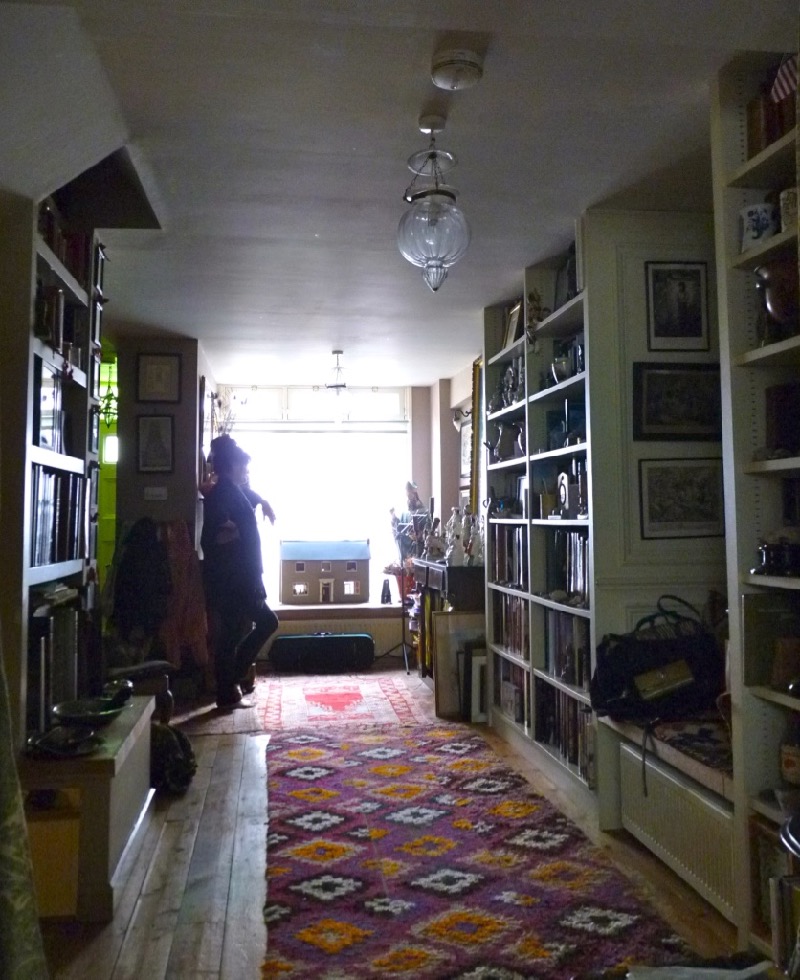 Christina is an Art Director and Production Designer. For  the last few years she has worked on the series Game of Thrones, but she is also an  architect and graphic artist who teaches Film Studies. She redesigned the front of their eighteenth century terraced house, a former butcher’s shop that had been badly converted in the 1960s. ‘It was based on the shops in Flask Walk in Hampstead, and an old shop front that I was going to buy, but its timbers  turned out to be rotten. But the front door is old and once I got that, it it gave me the detail from which to copy and construct the rest.’ 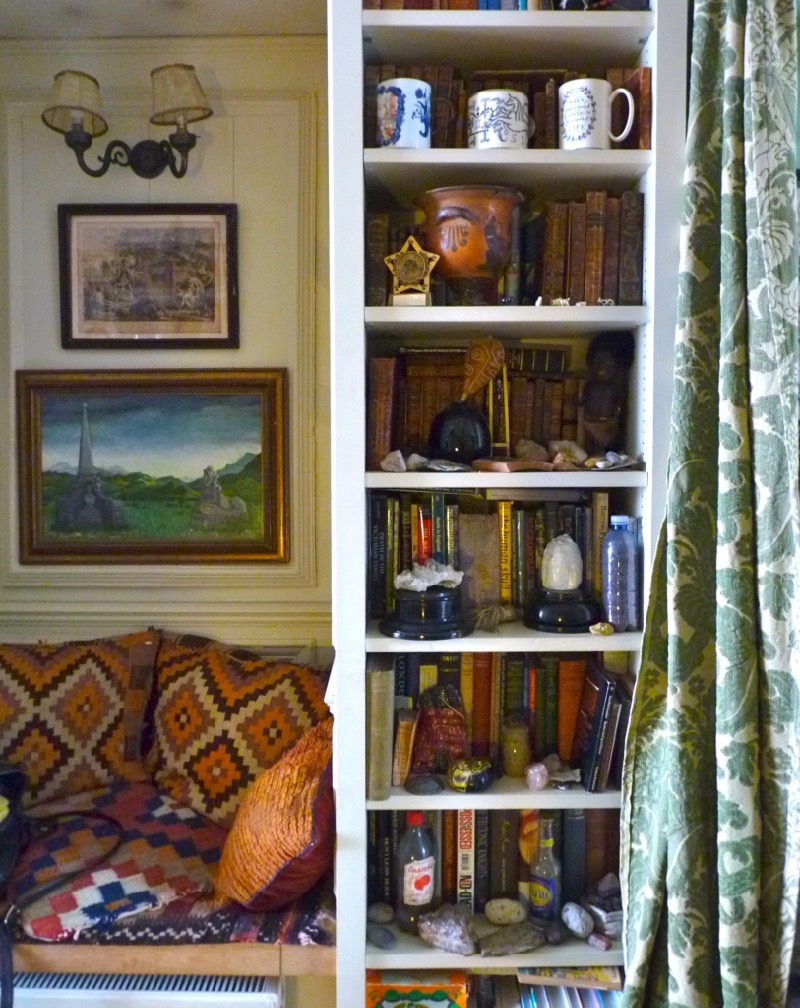 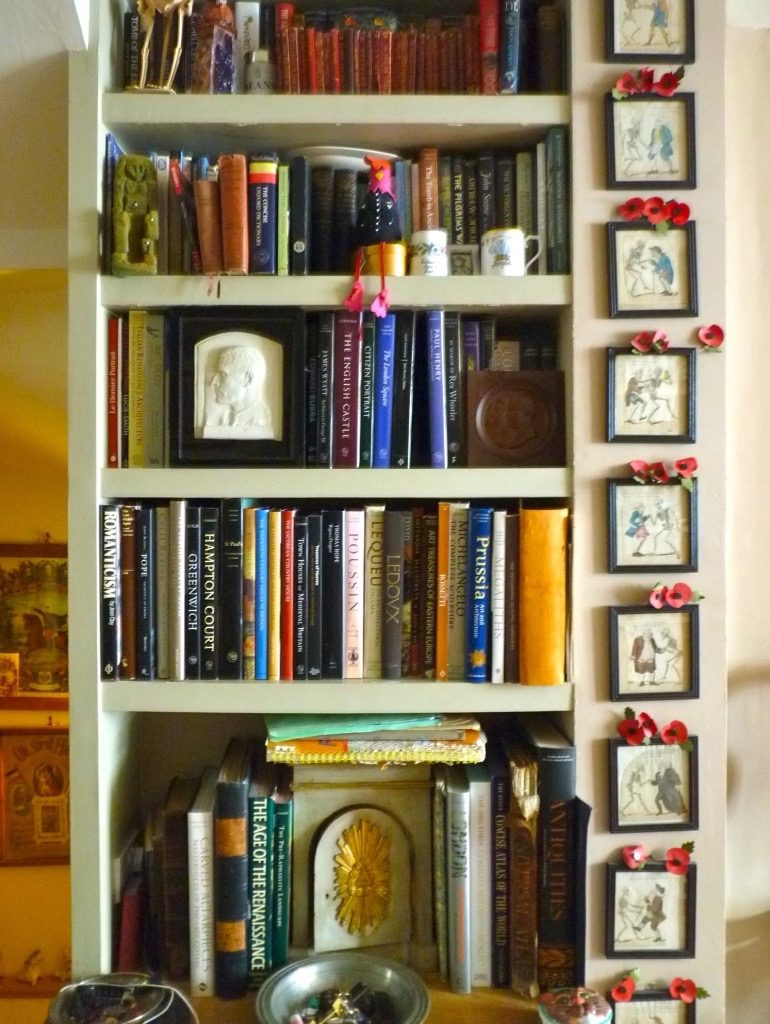 Roger is a former president of the Mausolea and Monuments Trust, with an ‘ongoing interest in ossuaries, skeletons and death’s heads on tombs, monuments, outdoor tombs and the inexhaustible pleasures of British churchyards.’ He framed up and hung this series of prints, a ‘Dance of Death’ by ?George Cruikshank, garnished with poppies for Remembrance Day.

When their son was a baby this became his night nursery, and Christina slipped the illustrated pages from a ‘Babar the Elephant’ book into these frames. Now George  Vertue’s prints of the Kings and Queens of England, around which this whole room was designed, are back on show.

This print of a London square is by Alan Sorell and was cut from a London Transport poster.

Some of  the house’s most  familiar landmarks have migrated to the basement, things that I have been looking at on my visits there for over twenty years. 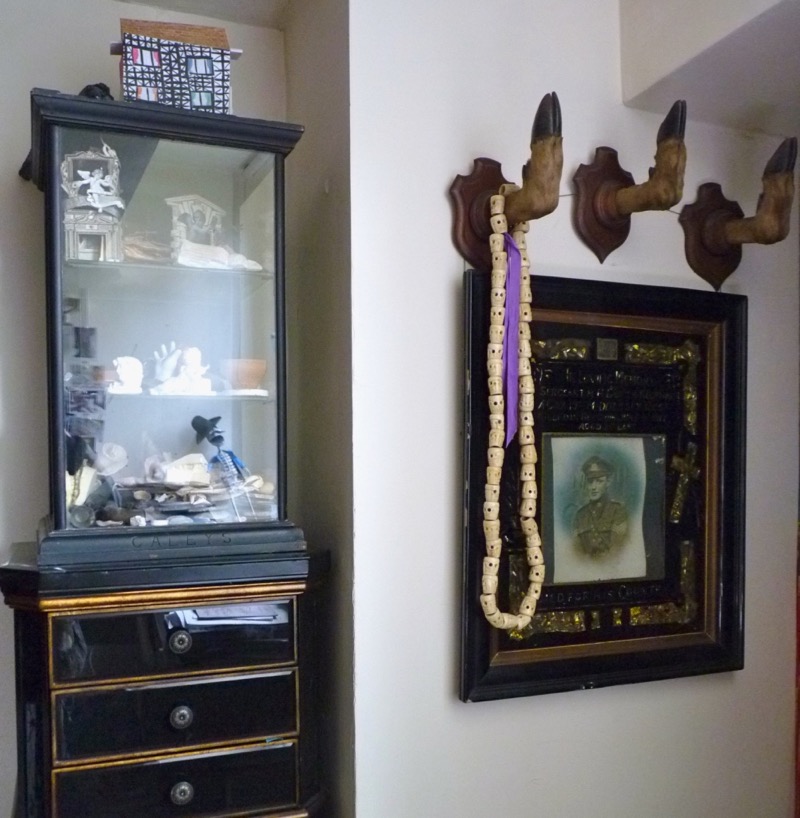 This vitrine was made for displaying chocolates, now it holds Christina’s Cabinet of Curiosities, ‘ old architectural models that I made, beach finds, wax ex votos, plaster casts of members of the family’s teeth.’ The little deer hoof pegs are French and the model of a house is by their daughter Iris.’ The memorial picture is one of the first things I bought in Brick lane. It’s beautifully hand made but says, ‘In Lovnig Memory,’ rather than ‘Loving.’

Min Hogg used this stupendous picture of their 1980s bedroom in her chapter called ‘Eccentric.’ She described Christina as ‘the owner of this domestic mausoleum … a robustly cheerful student of architecture who is amused by her own taste for the macabre.’

Roger and Christina, 1990s. ‘She had furs, it was very very rare to see a student wearing furs in Cambridge in the early 1980s,’ says Roger. ‘Double red fox, several layers of very long skirts and a big Sam Brown belt. Crucifixes.’  You were north of Pre Raphaelite?  ‘South of Chateaubriand’, says Roger.   All images: copyright Conran/World of Interiors/ bibleofbritishtaste.

[François-René de Chateaubriand, Memoirs from beyond the Tomb, (1849/50), a book worth reading.]