On the borders of Sussex, Surrey and Hampshire, Shulbrede Priory is the surviving corner of the rather obscure religious house of Wlenchmere, founded at the end of the twelfth century and suppressed by Henry VIII in the 1530s.

The cloister in an old photograph. Since this was taken part of the tree fell on the house and it had to be cut down. 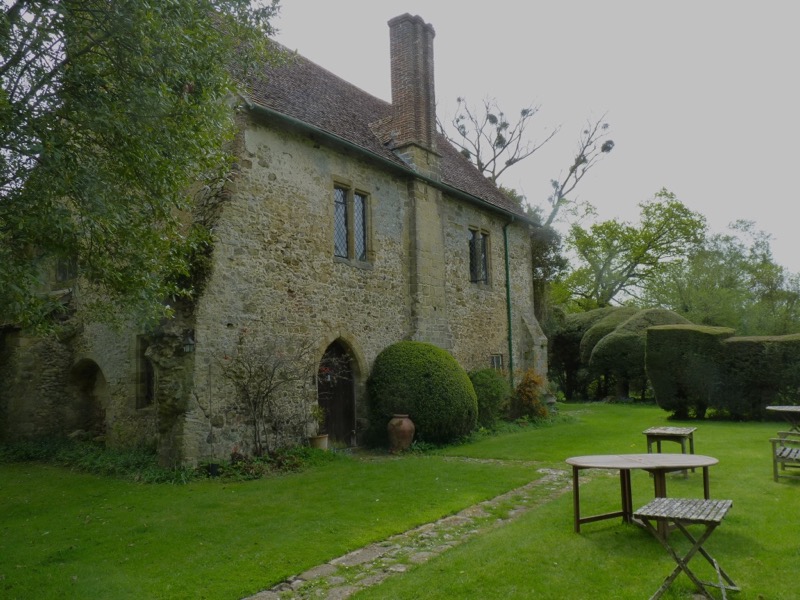 The present entrance front was originally the southwest corner of a much larger monastic building complex. Once the Augustinian canons were turned out demolitions and dilapidation set in, but what remains has been altered and restored very little. In 1902 the priory became home to Arthur and Dorothea Ponsonby; they loved the place so much that they bought it, and their granddaughter Catherine and her husband Ian Russell have lived here since the 1970s. 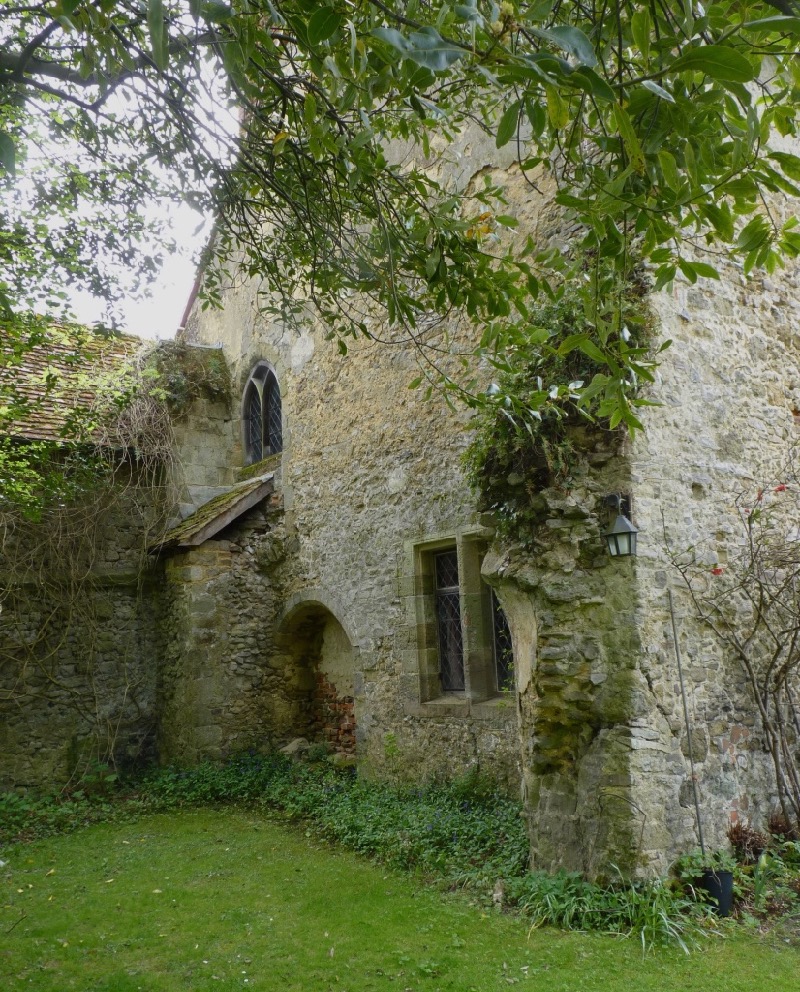 The uncapped north corner of the present house; a further range of cellerage (demolished for building stone long ago by Shulbrede’s yeoman farmer tenants) once ran from this corner, where the building ends abruptly now. 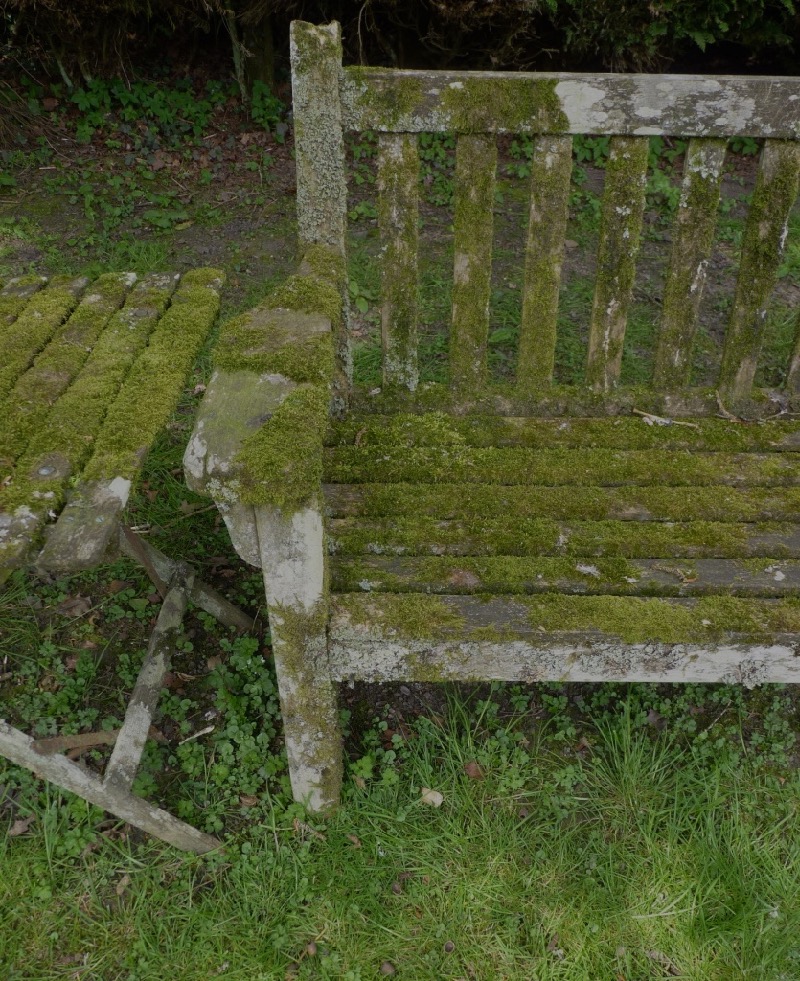 A garden bench, cushioned with moss. Catherine’s sister Laura Ponsonby, an expert field botanist who worked at Kew Gardens (and died in 2016), lectured on fungi, liverworts and lichens, and once helped the police in a case of murder by poisoning, identifying some deadly nightshade baked in a pie. She used to say that there were ‘enough different species colonising this seat to teach a complete course of mosses and liverworts.’ 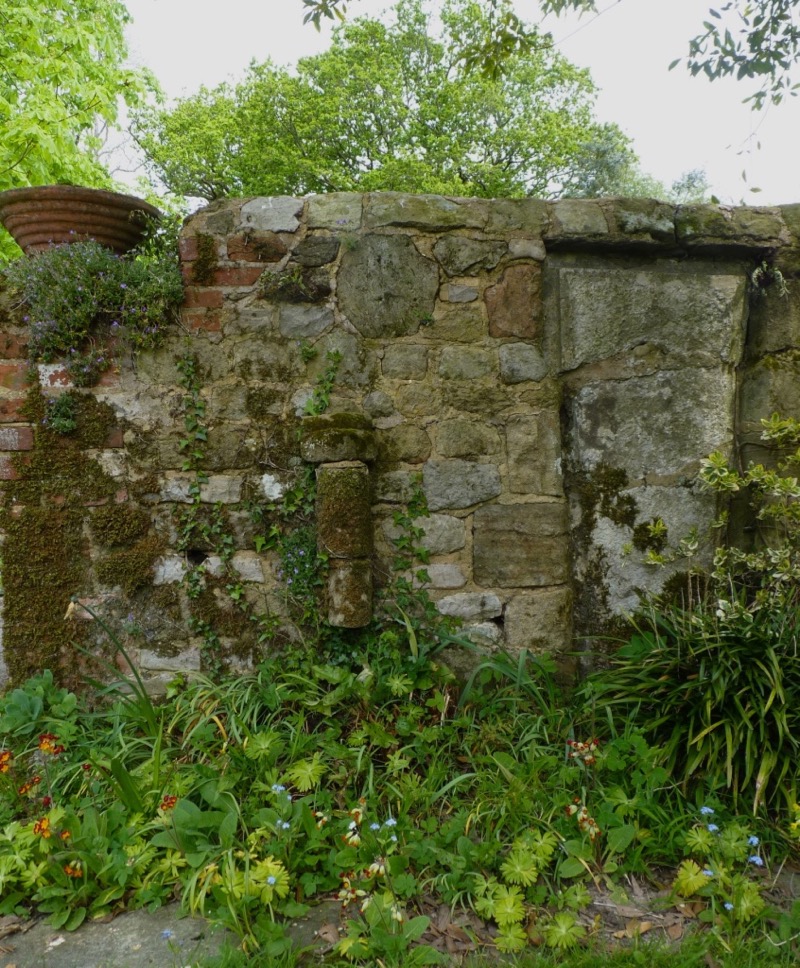 An ancient stone coffin lid excavated by Arthur Ponsonby and set with a mosaic of other archaeological fragments in the garden wall. Arthur (a radical Liberal MP who later defected to the Labour party) and Dorothea Ponsonby were a rather intellectual and bohemian couple who came upon Shulbrede as a tumbledown agricultural dwelling, moved in and gardened and restored and furnished it on antiquarian principles according to the tenets of the Arts and Crafts movement. 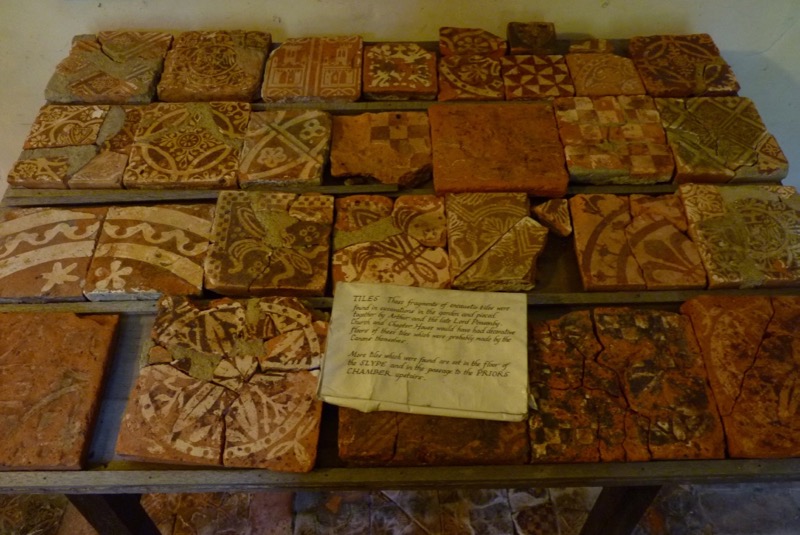 Medieval encaustic tiles excavated at Shulbrede by Arthur Ponsonby and displayed on a table top in the hall.

The Priory painted for Arthur and Dorothea by their friend Jack Strachey.

The crypt was in service as a dairy when the Ponsonbys came to Shulbrede. Arthur Ponsonby made this cool dim room into his study and wrote his comprehensive History of Shulbrede here, published in 1920.

On the deep window sill a small museum of archaeological fragments disinterred at Shulbrede during excavations that took place here between the wars. Their labels originally written by Arthur Ponsonby were recopied by his granddaughter Laura. 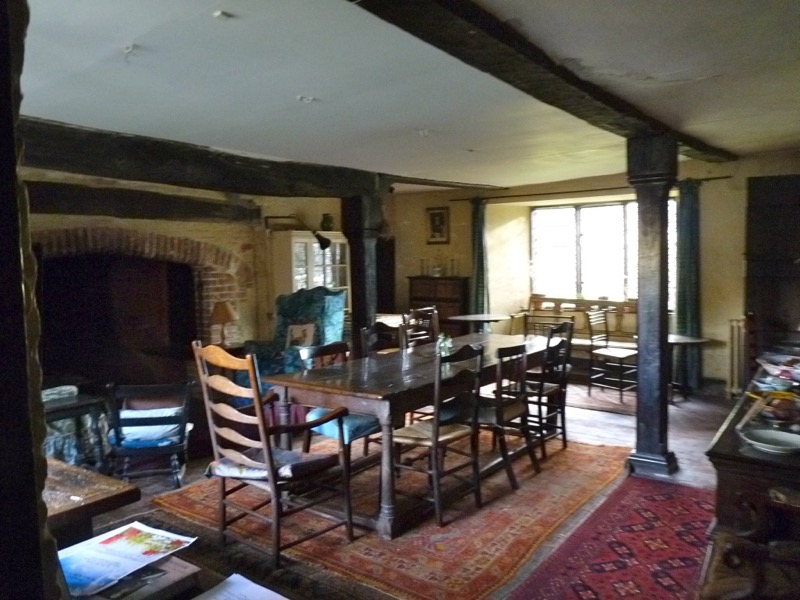 The dining room was once part of the canon’s refectory, the Ponsonbys furnished it with an oak refectory table, Morris chintzes and rush seated chairs. Their decorating style could be called ‘intellectual socialist,’ says Ian Russell. The local manorial court – a law court trying cases relating to land holdings etc – was regularly convened here or the Prior’s Chamber upstairs until the 1920s.

Buffet in the dining room with pieces of blue and white striped ‘Sussex ware’ and so on.

This dolls house originally belonged to Arthur and Dolly’s daughter Elizabeth Ponsonby who was one of the leaders of the Bright Young Things, said to have been the model for that poignant character Agatha Runcible in Evelyn Waugh’s novel, Vile Bodies. Waugh described the BYT’s pass-times as, Masked parties, Savage parties, Victorian parties, Greek parties, Wild West parties, Russian parties, Circus parties, parties where one had to dress as somebody else, almost naked parties in St John’s Wood, parties in flats and studios and houses and ships and hotels and night clubs, in windmills and swimming-baths, tea parties at school where one ate muffins and meringues and tinned crab, parties at Oxford where one drank brown sherry and smoked Turkish cigarettes, dull dances in London and comic dances in Scotland and disgusting dances in Paris – all that succession and repetition of massed humanity…
‘We don’t treat it as an antique, it’s definitely a working doll’s house.’

The long range seen from the garden, the single story extension on the far left houses the old kitchen. Ian Russell has used his considerable professional expertise as a structural engineer to bring the house’s roofs and chimneys back into good order, following the SPAB’s principles. 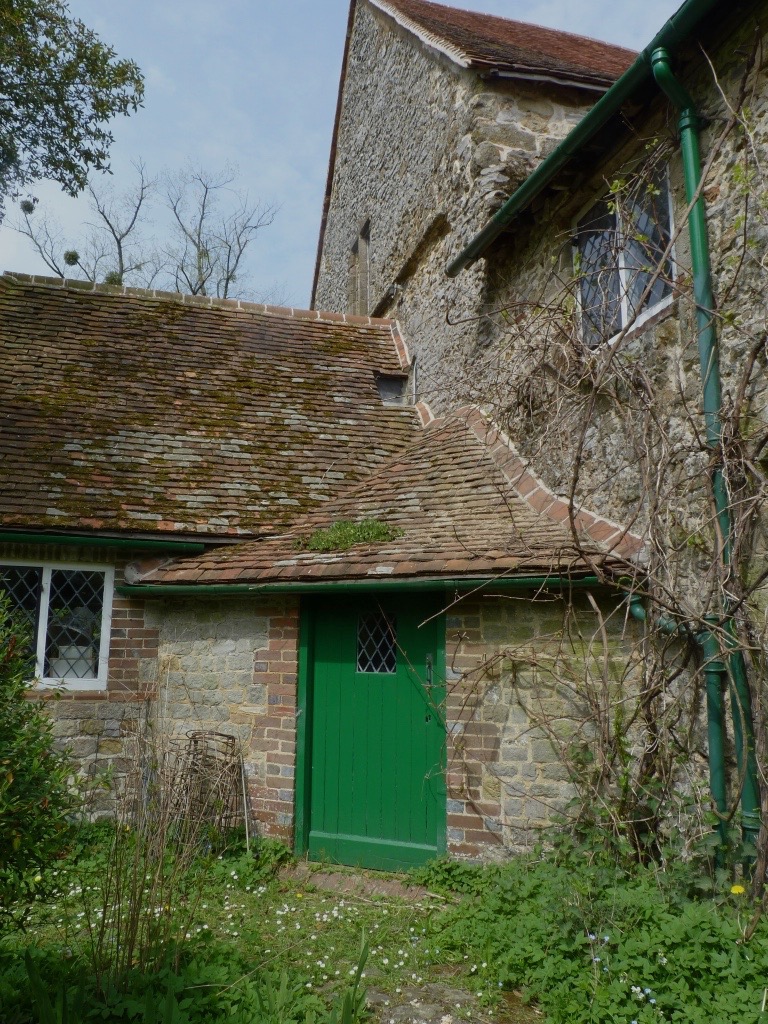 Outside, a confluence of roofs

and inside, the old kitchen range chimney from c.1902. Now this is a store for second-hand books sold for charity on open days.

An exuberant hang on the ‘new’ kitchen wall, with Joanna Russell’s schoolgirl staircase painting in the middle and her artist-author sister Harriet Russell’s Partridge and Pear, top right. Peacocks belong to the poultry farm opposite the priory, but spend much of their time and shed their feathers here. This is part of the extension comprising a housekeeper’s room and second kitchen built on by the Ponsonbys in 1914.

Walter, the – sometimes malevolent – rescue cat who is prone to lash out at mealtimes, Magpie (not seen) is far more adventurous and emollient. ‘We don’t know their early history, they both came from the cat rescue by the A3. We think that he had rather a difficult childhood.’ (Moments after this photo, Walter attacked.) The cupboards and dresser are painted a glorious deep blue gloss.

The larder is a landscape all of its own

Catherine Ponsonby painted with her hair tucked behind her ear by fellow Goldsmith’s student Robert Stewart in the 1960s, 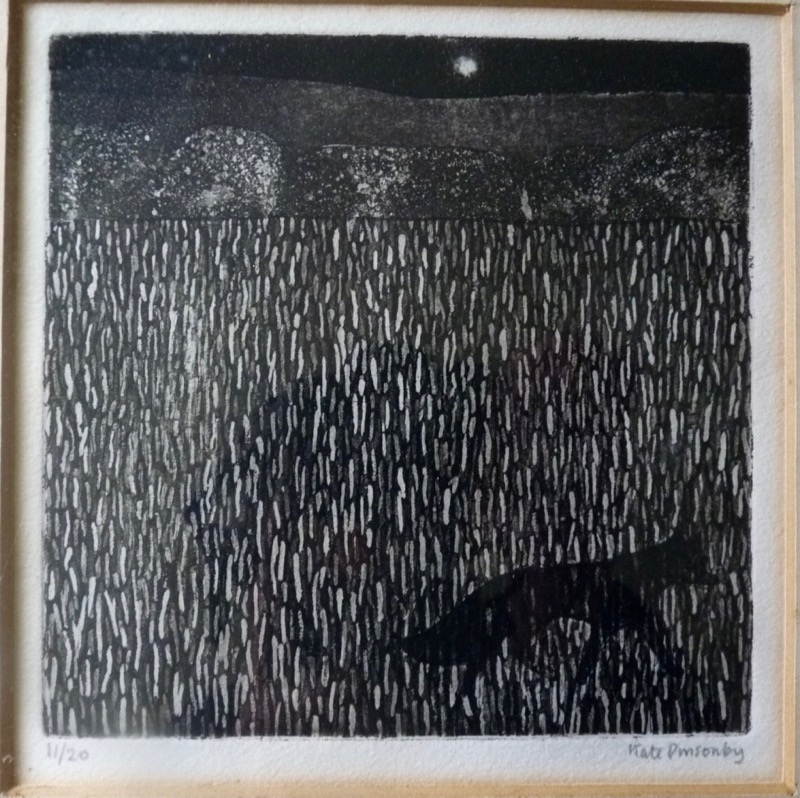 And her lino print of a thieving fox slipping away through the grass at Shulbrede. My favourite thing in the house.

The Prior’s Chamber, with the grand piano that Hubert Parry – Dorothea Ponsonby’s father – bought as a student, standing near the window. Sir Hubert Parry set the words of William Blake’s great poem Jerusalem to the stirring tune that we still sing today, Parry’s statuette stands on top of the piano. He composed the Shulbrede Tunes here, each one named for a member of his daughter’s family. A rare colony of Long Eared bats – a species protected by law – roosts in the rafters above.

In the sixteenth century this dividing wall was inserted into the Prior’s Chamber and covered with wall paintings illustrating the folk legend in which the animals receive the power of speech on Christmas Eve to announce their Saviour’s birth. A cockerel announces ‘Christus natus est,‘ a duck squawks, ‘Quando, Quando?’, a Raven answers, ‘In hac nocte,’ a bull bellows ‘Ubi, ubi?’and a lamb bleats, ‘In Bethlehem’ (In Be-e-e-eth-le-he-e-em).

The arms of King James 1 were superimposed over the middle section of the wall painting at the beginning of the seventeenth century.

A tureen, part of a dinner service. ‘Now that is a bit of Roger Fry for the Omega Workshop. I have memories of the food congealing on these plates.’

The Bloomsbury artist and critic Roger Fry was a frequent guest at Shulbrede, encouraging Arthur Ponsonby’s painting and drawing.

‘When our children were tiny, every time we got some stickers, we put them all over the tiled wall.’

A rather brilliant bathroom painting by Joanna Russell, done when she was at school.

Possibly the satin shoes worn by young Arthur Ponsonby as a page to the elderly Queen Victoria. His father Sir Henry Ponsonby was a courtier and the queen’s Private Secretary. 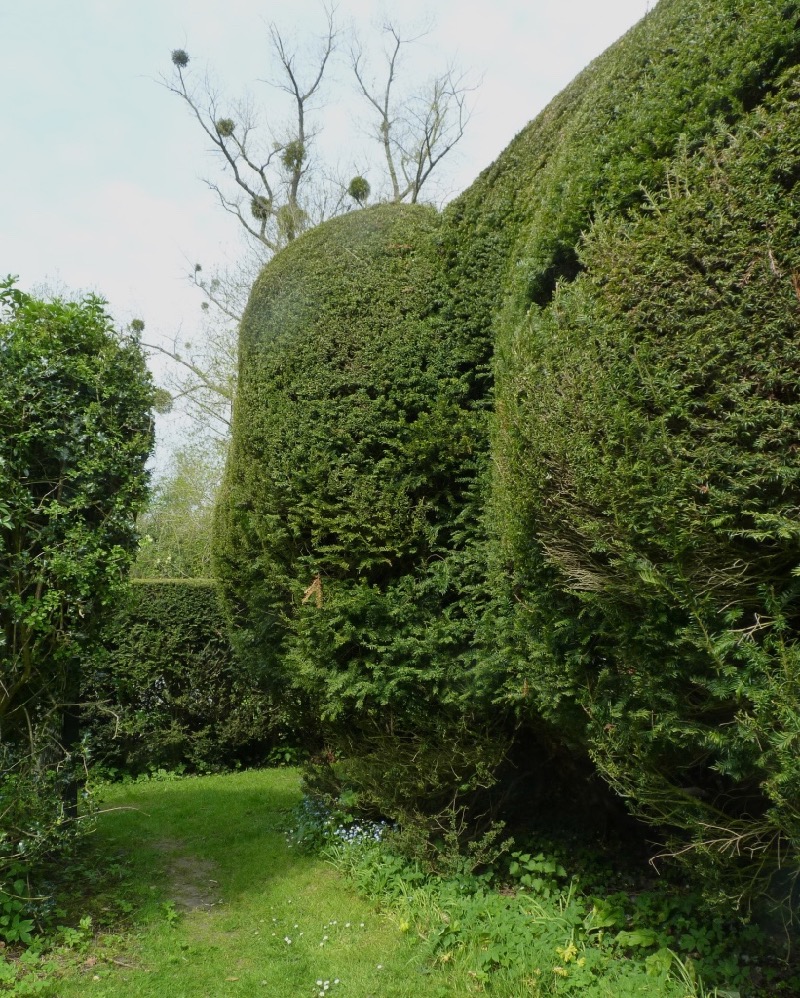 and the same topiary at Shulbrede by Joe Ruddy, family friend and colleague of Laura Ponsonby at Kew Gardens, mixed media,

‘That’s by Harriet, its a print from a series of pictures for a joint exhibition of blue images, its got the famous Hokusai Great Wave.’ Blue Escapes painting, screenprint by Harriet Russell.

Harriet is a freelance author and illustrator whose work has been commissioned by Hermes, the New York Times, Penguin and many others. Envelopes published by Random House in 2005, was her challenge to the Royal Mail. As a student at Glasgow Art College she designed, drew, stamped and posted dozens of envelopes to herself, concealing her address in cartoons and diagrams, thickets of typescript, collages, a crossword puzzle, a menu and a musical score. You can buy a copy of this funny and ingenious book when you visit Shulbrede Priory, or, here. Of the 130 envelopes she sent, 120 arrived and her triumphant postmen started writing ‘Solved by Glasgow mail center’ on the backs. ‘The UK postal system has certainly exceeded my expectations.’You can find Harriet’s online shop here.

and her blog here. 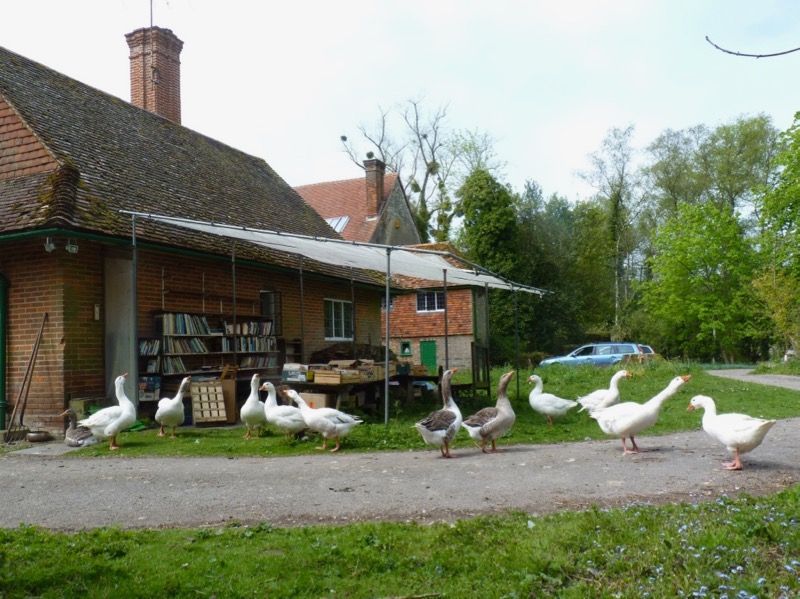 Shulbrede’s flock of geese congregating by the outdoor bookstall 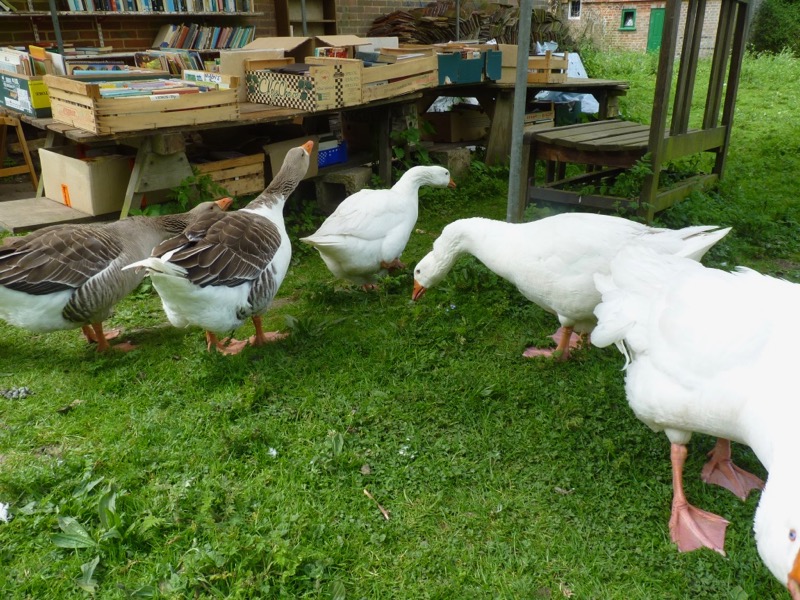 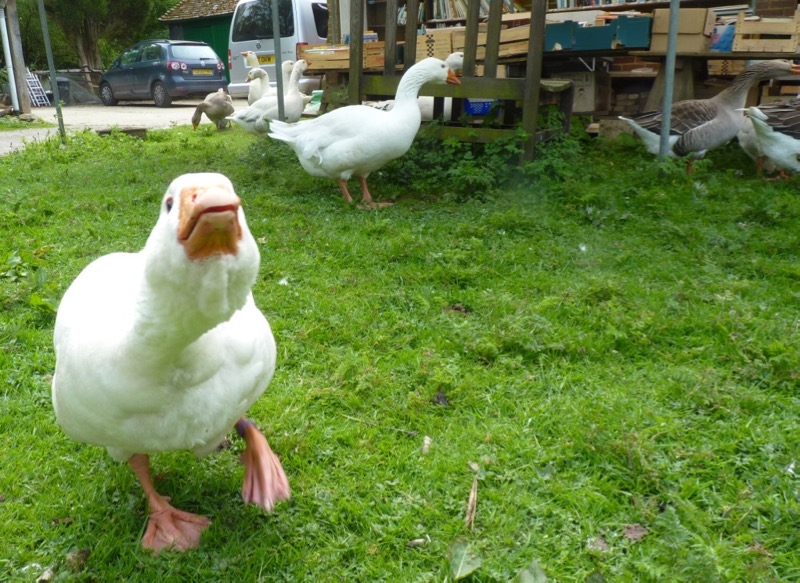 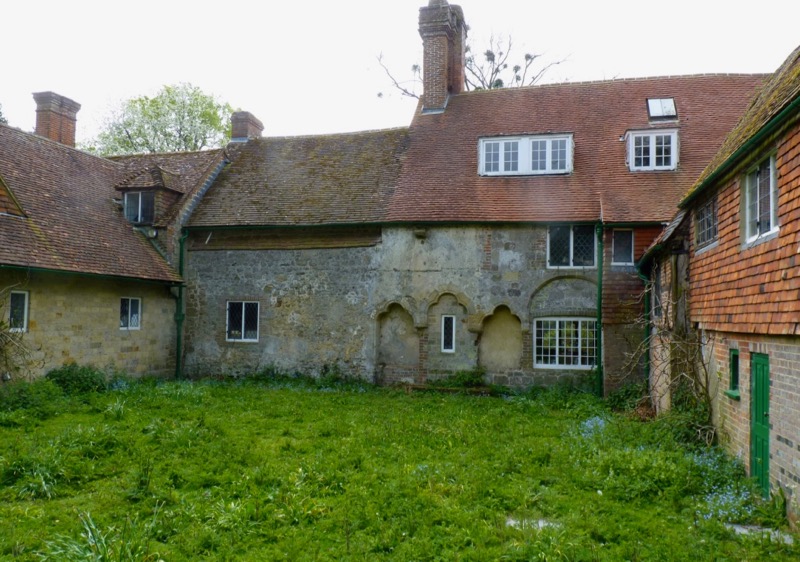 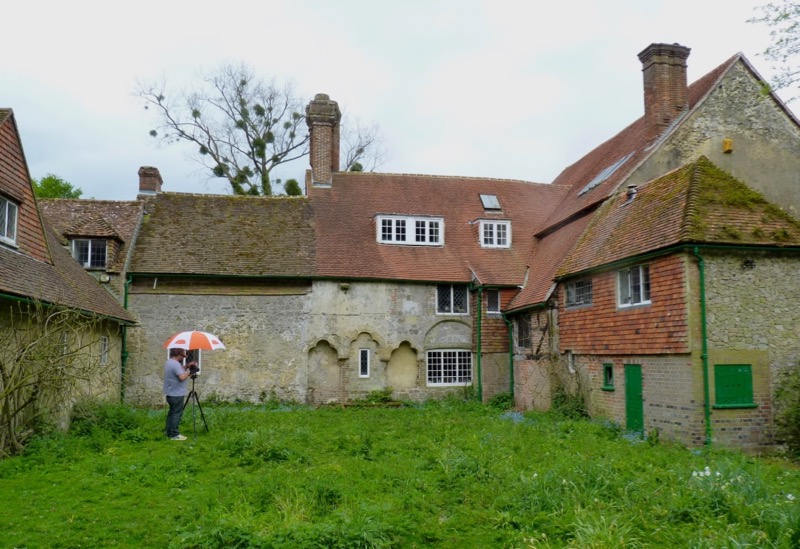 The cloister with photographer Antony Crolla, teeing up for his shot (for The World of Interiors). 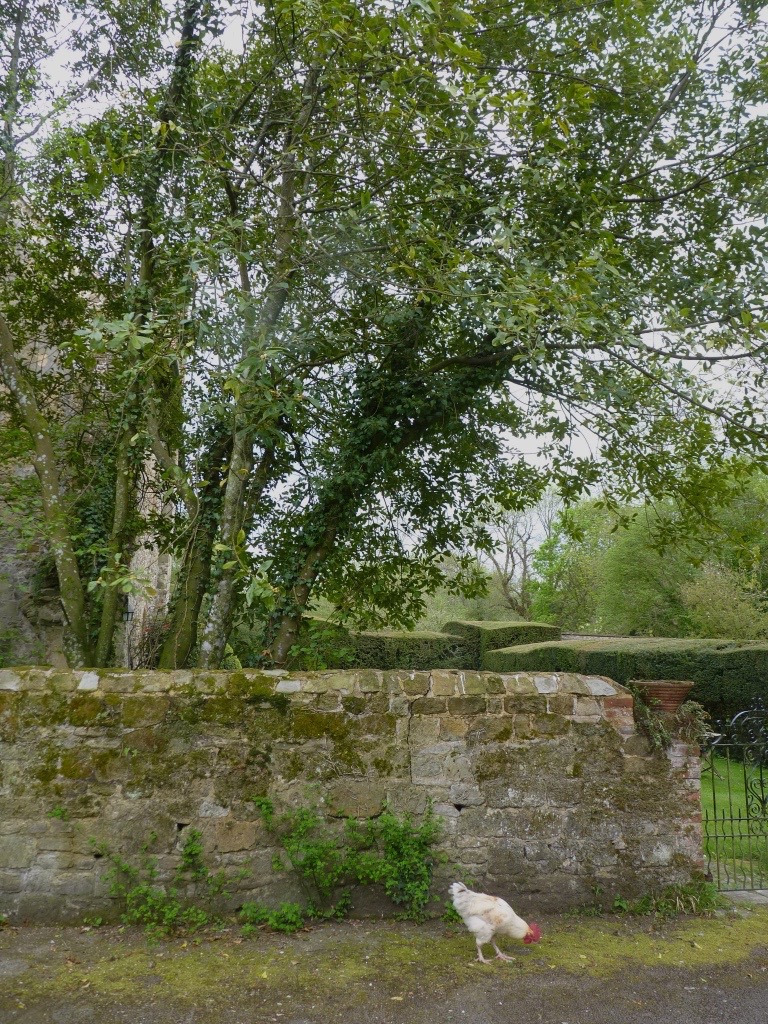