I started trailing the designer Susanna White because of a lamp shade. It was a tall cone printed with ‘Hunters,’ the dashing repeat design of a man and woman on horseback drawn by her grandmother Joan Evelyn Thomson – aka J.E.T. ‘Hunters’ is entirely distinctive and remains my strong favourite among the stand out patterns that launched Whiteworks in 2017 – Susanna’s design partnership with her husband John – now operating from a jewel box of a little showroom on a corner of London’s Pimlico Road.

Joan Evelyn Thomson studied at art schools in Paris and Vienna in the 30s, modelled for the fashion house Worth and then fell in with the Bloomsbury Group, posing for her artist-friend Edward Wolfe who was working for the Omega Workshop. Post-war she produced these patterns of startling originality for the silk and textile supremo Zika Ascher, whose stable of artist-designers included Matisse, Cecil Beaton, Ivon Hitchens and Henry Moore. She counted Ravilious and Graham Green among her friends, married more than once, hung out with the Beatles and the Maharishi and took up Transcendental Meditation. Her designs were forgotten until Susanna found them in an old folio in a chest of drawers in her father’s house in 2014.

Susanna brought her experience in interior design to develop the JET collection of wallpapers and fabrics and makes beautiful use of them in the house in Gloucestershire that she built with her husband. It’s based on a ‘provincial merchant with ideas above station and no pocket to match and no below stairs servicing conceits….  and a house called Honnington that is a marvel,’  she says. It’s still a work in progress, unpatinated. But, ‘the best thing was that a friend bought her aged Mother with Alzheimer’s, who wandered round the garden saying she had ‘been here before’.’

For the bibleofbritishtaste she writes about Living with her Design Heroes, the makers and artists she constantly refers to herself. ‘ I like the premise that Syrie Maugham had painted everything white and the new wave pushed in with pattern and chintz. It struck a chord.,’ she wrote to me. ‘For all the talk about pattern and colour, people are still feeling super attached to grey and mushroom tones – I remember reading in a magazine that a room had been painted in 38 different shades of white… ‘
~ NOW READ ON ~ 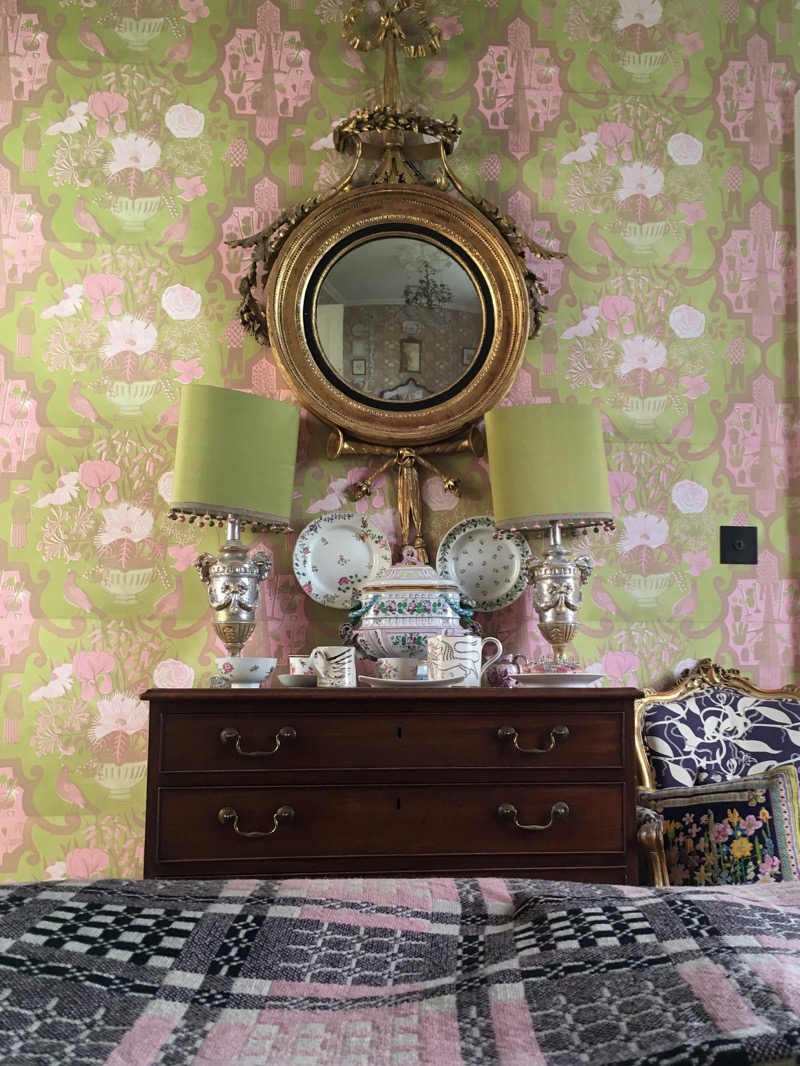 For the last 10 years John and I have been building a house and a garden. We knocked down a 1970’s prefabricated building and replaced it with a classical, one room thick, neo-Georgian dolls house with the surprise blessing of the local planners. It is not everyone’s cup of tea but it has been a complete privilege to draw on the influence of Design Heroes, while experiencing the endless choices and accidents that make up our house, not least the influence of the makers and robust interpretation on their part in producing a house from an C18th pattern book with (scant) broadband and C21st trimmings.  A multitude of influences have contributed to create our interior and I have with great difficulty chosen to focus on a significant few, who I think are anchors to the whole. 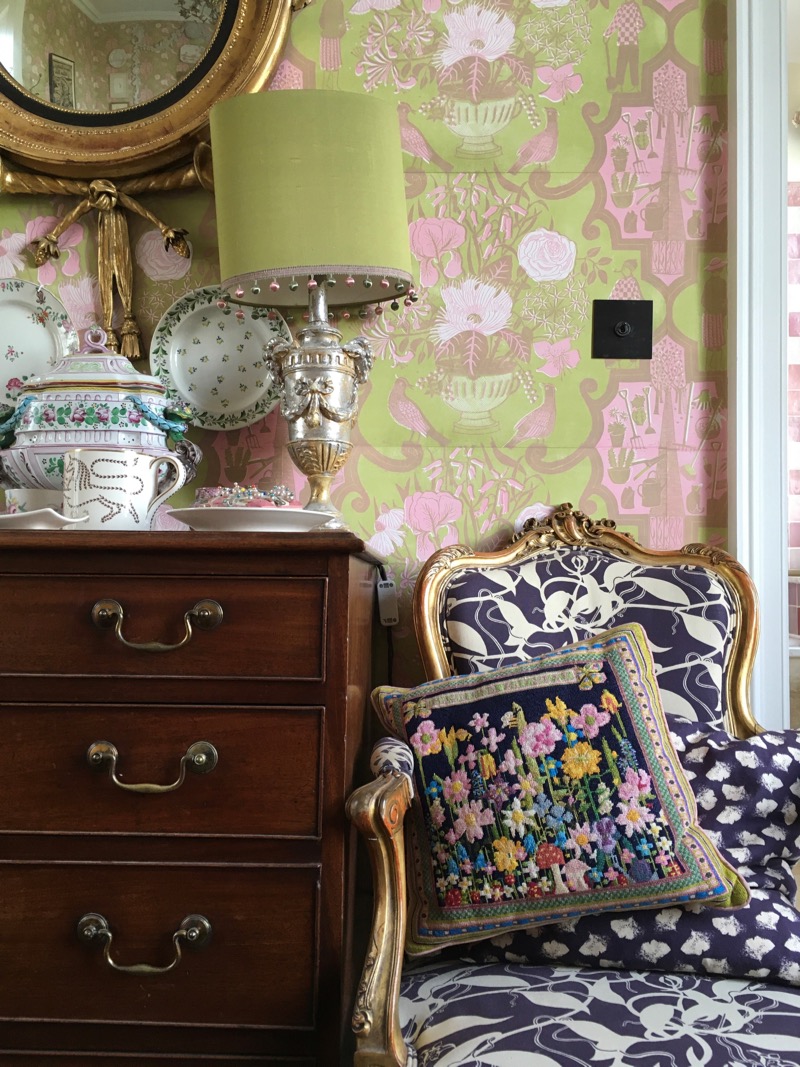 I love to imagine some intrigued expert scraping away layers of history hundreds of years hence and being rewarded finally with fragments of the original papers. What a privilege and what a responsibility – Marthe Armitage was an obvious must. 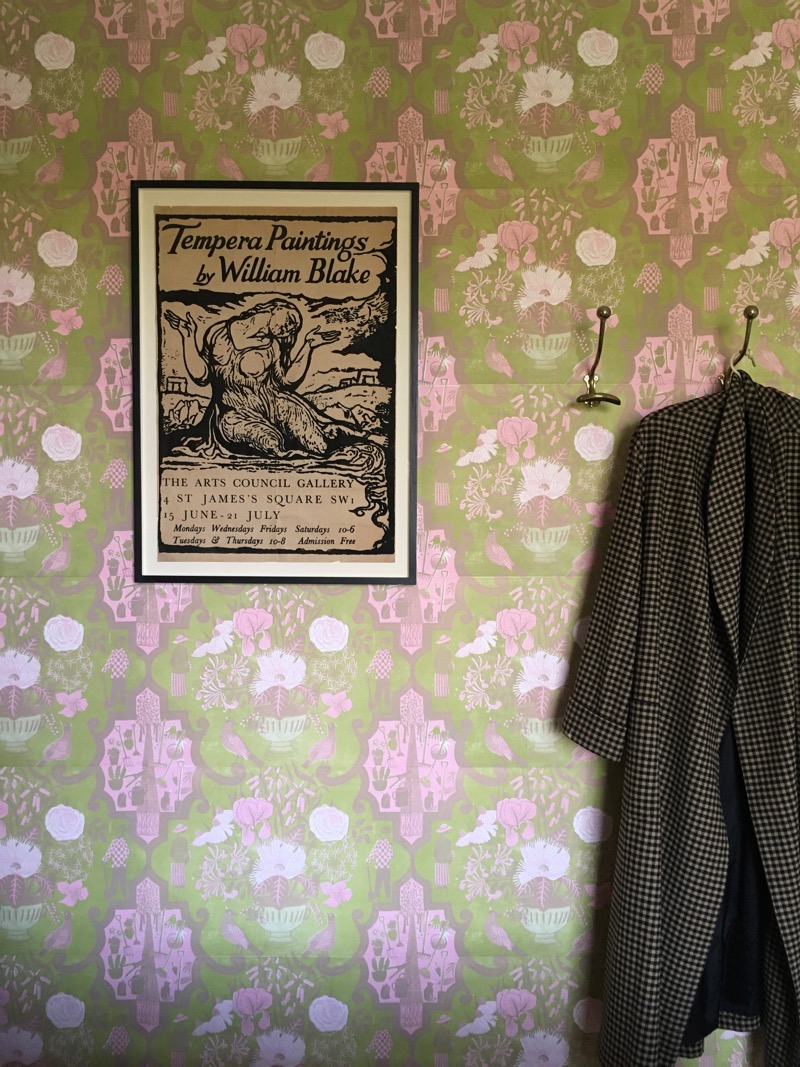 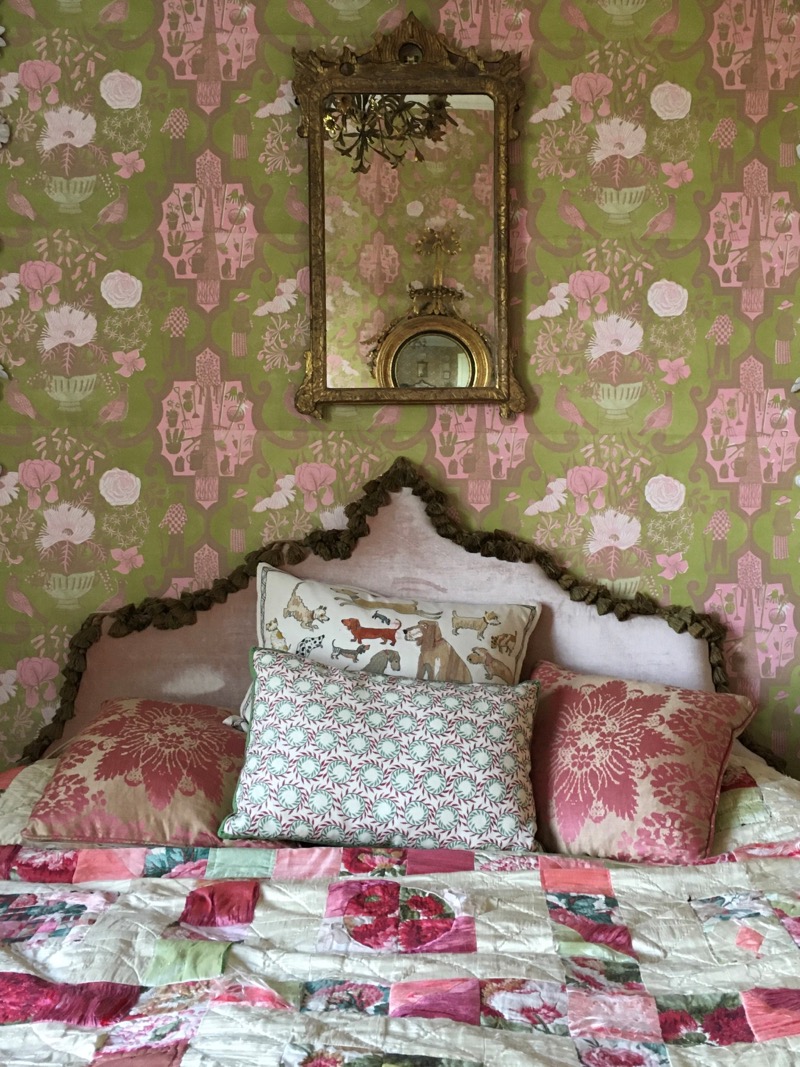 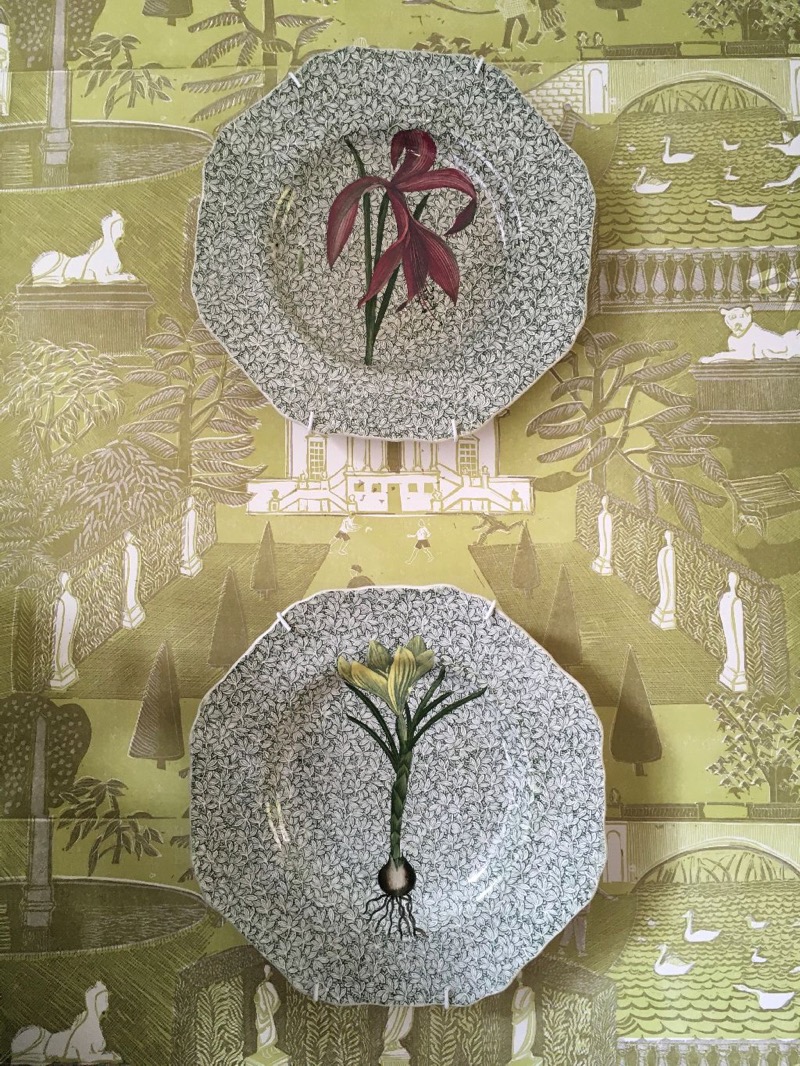 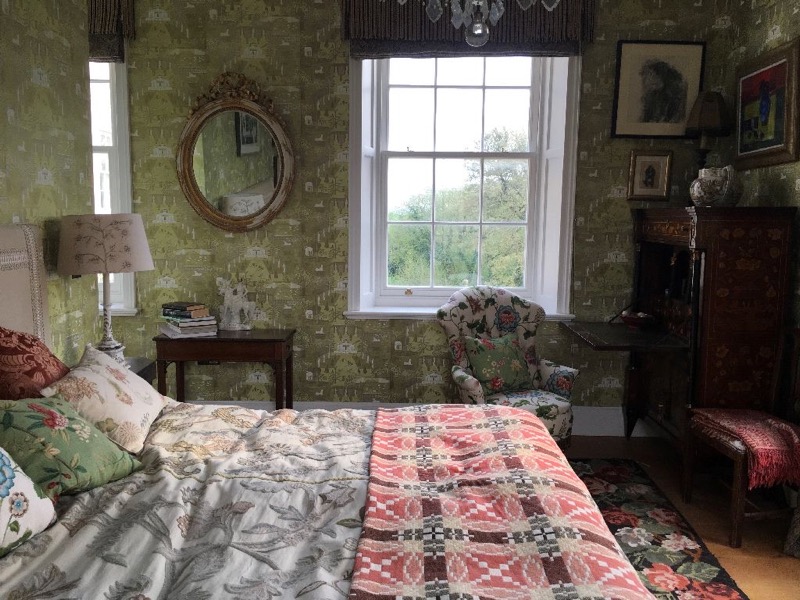 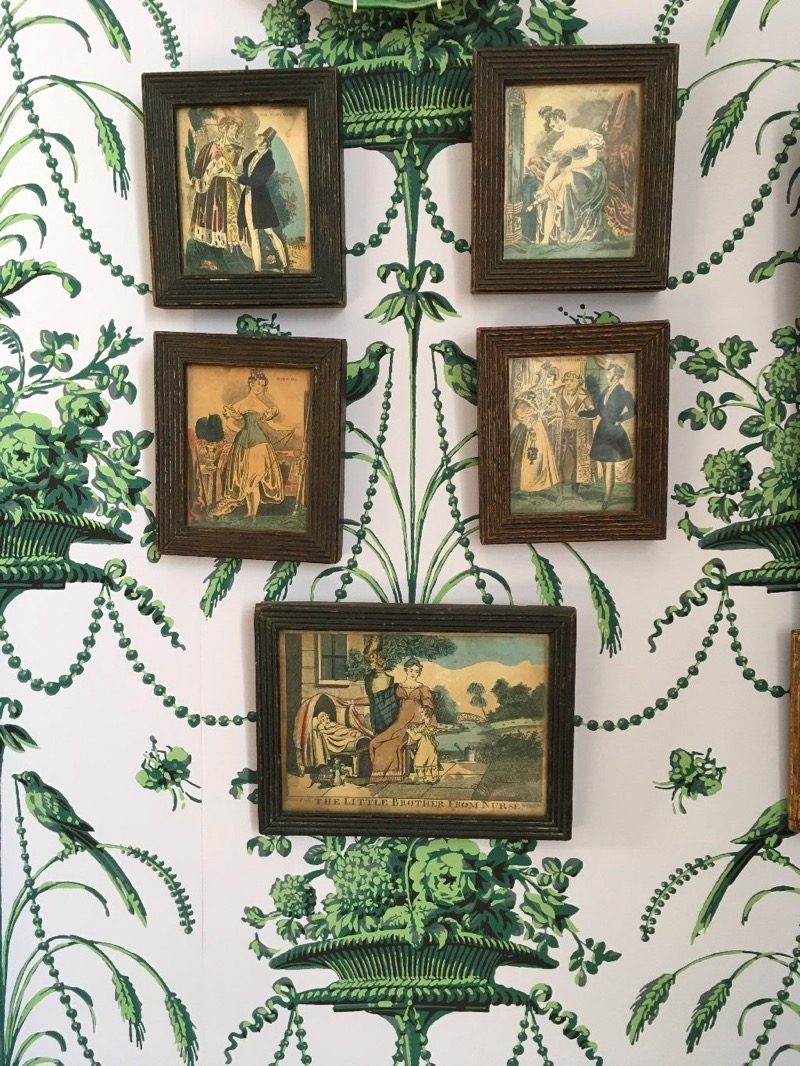 Marthe was (and still is) represented by Hamilton Weston and it was here that I accidentally bumped into Adelphi’s work, whom HW were also representing at the time. 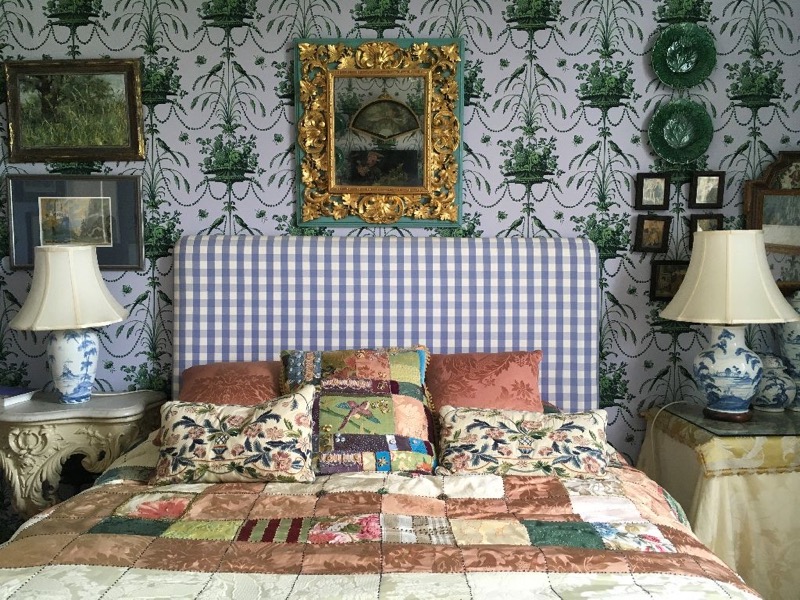 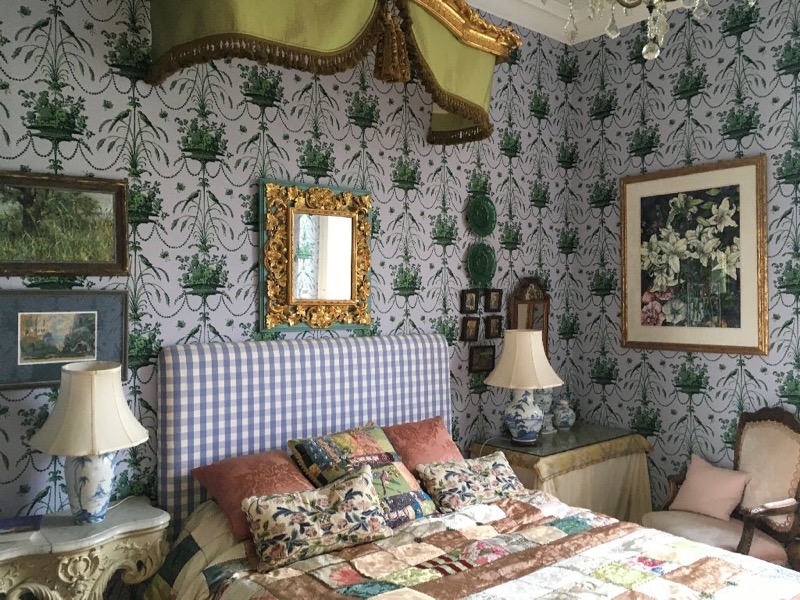 Guest room in Adelphi Parakeets and Pearls with Aubusson and Patchwork 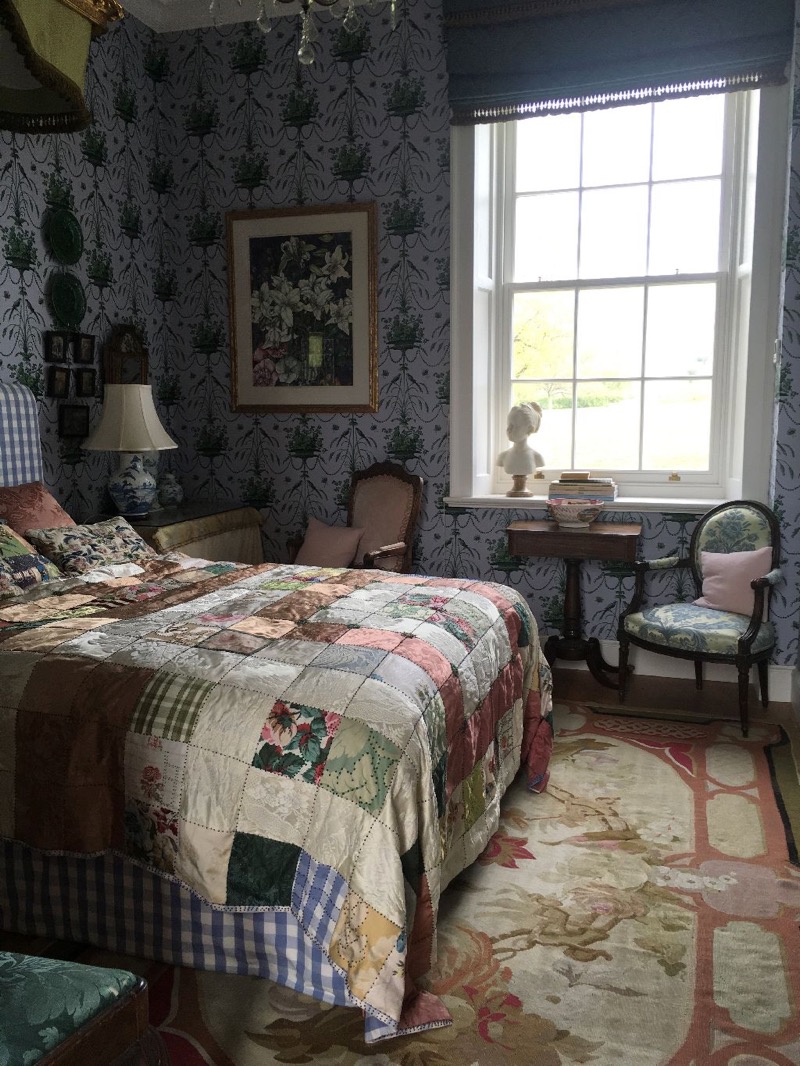 I love our ‘Parakeets and Pearls” an C18th French design in a custom Parma-Violet colour, almost more than life itself. I was so excited to find the paper hung in the latest Woodhouse dining room in the recent film adaptation of “Emma” in the original salmon pink and green document colours complimented by heavy swagged curtains dripping with fine passementerie. 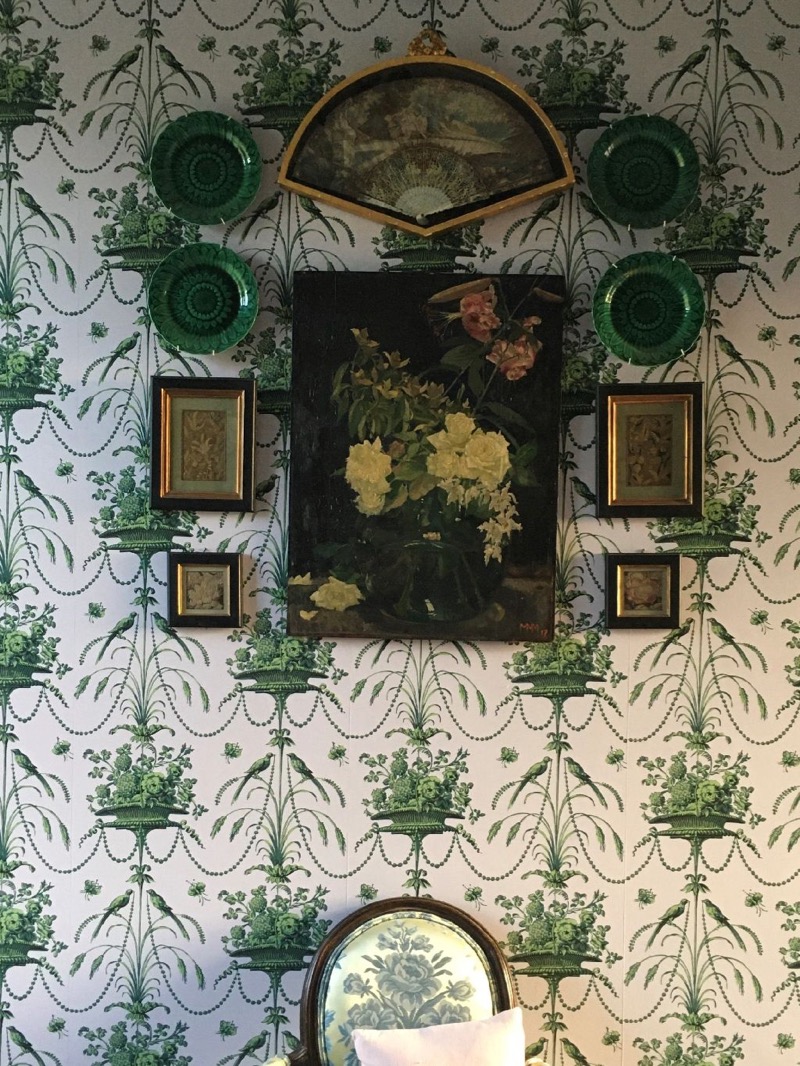 A flower painting by my great uncle Malcolm Milne, who studied at the Slade under Tonks.

As we built the house, Jet’s designs were still lying undiscovered in a drawer, it was unimaginable then that we would be pasting the designs of this singular Grandmother onto walls. 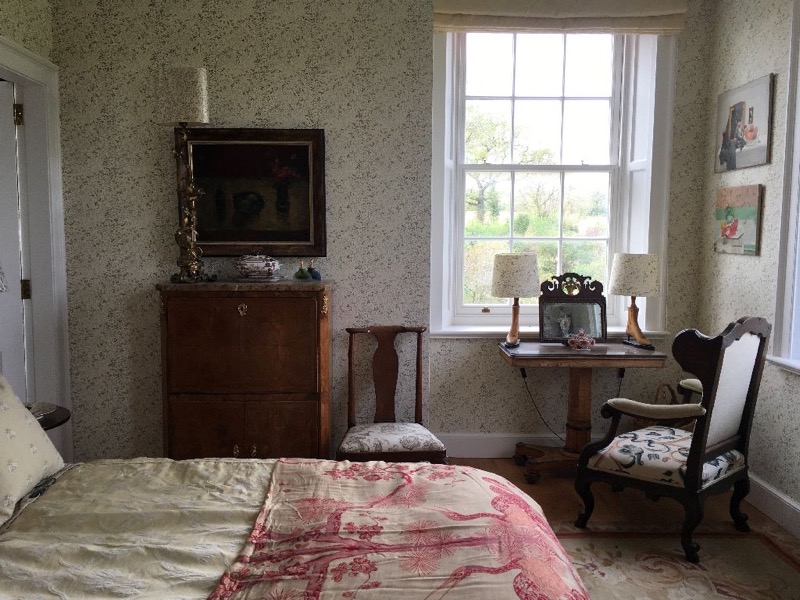 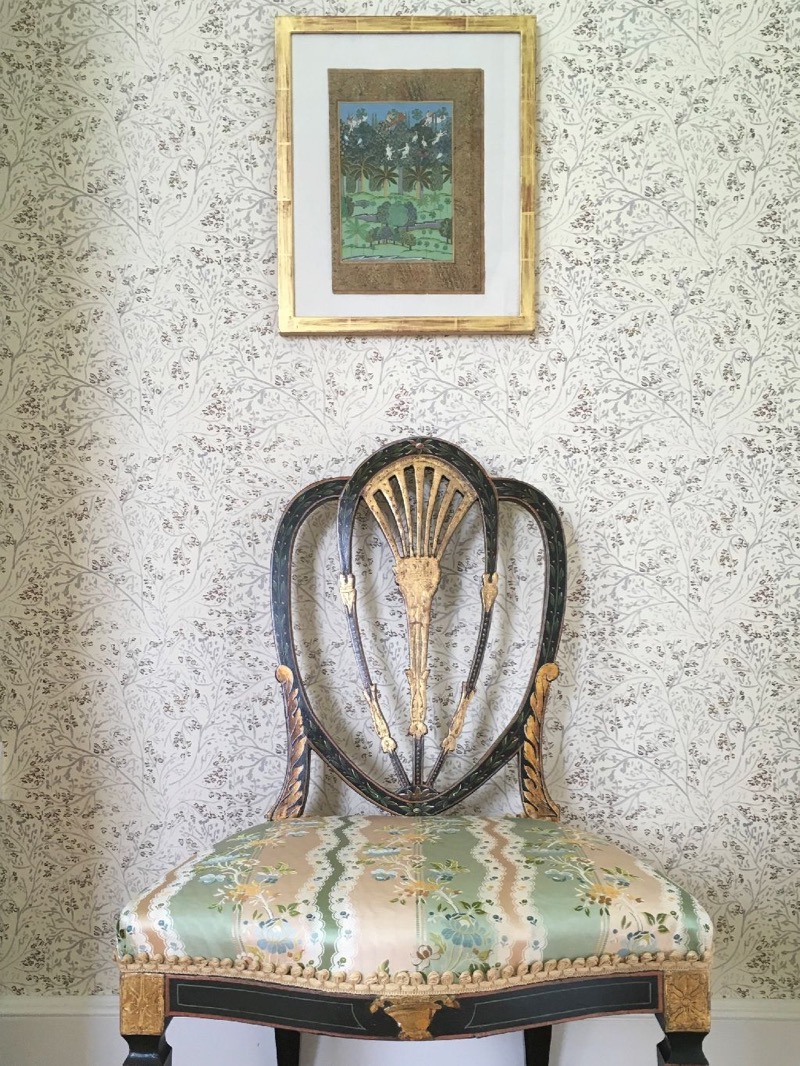 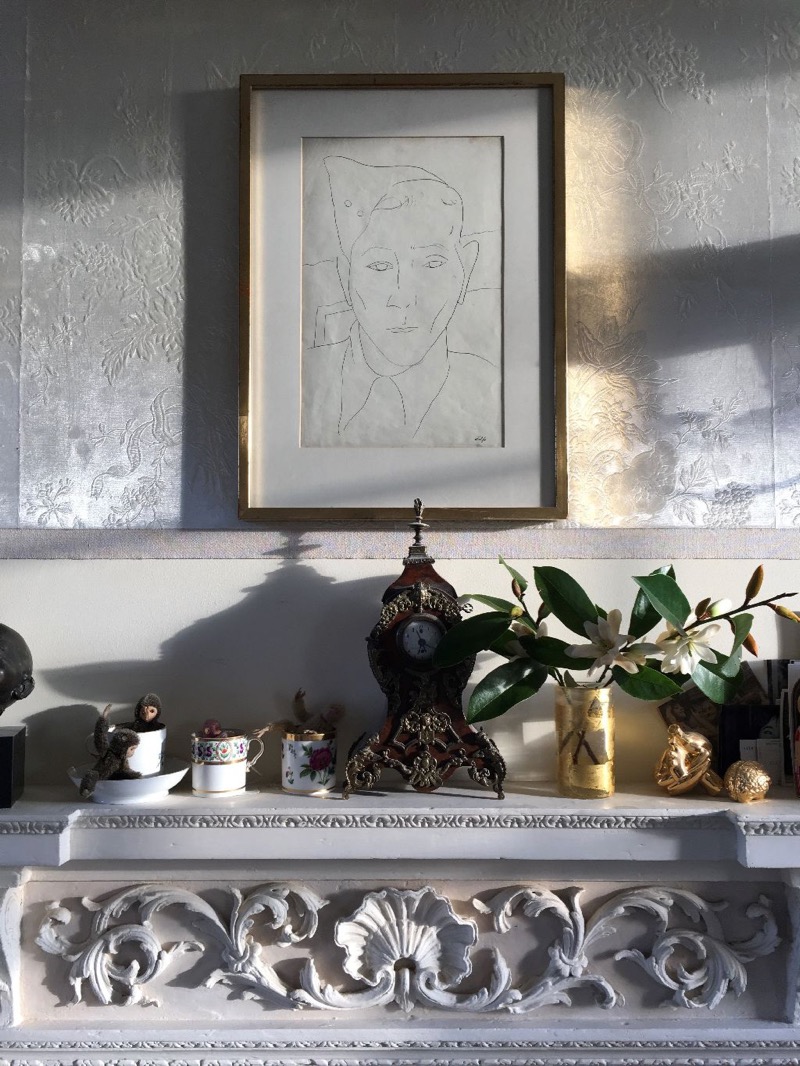 Teddy Wolfe, was Jet’s great mucker, a rather flamboyant RA who had worked with Duncan Grant in The Omega workshop and been billeted with Jet and her first husband in Dorset during the war with his aged Mother, and his work features throughout the house. 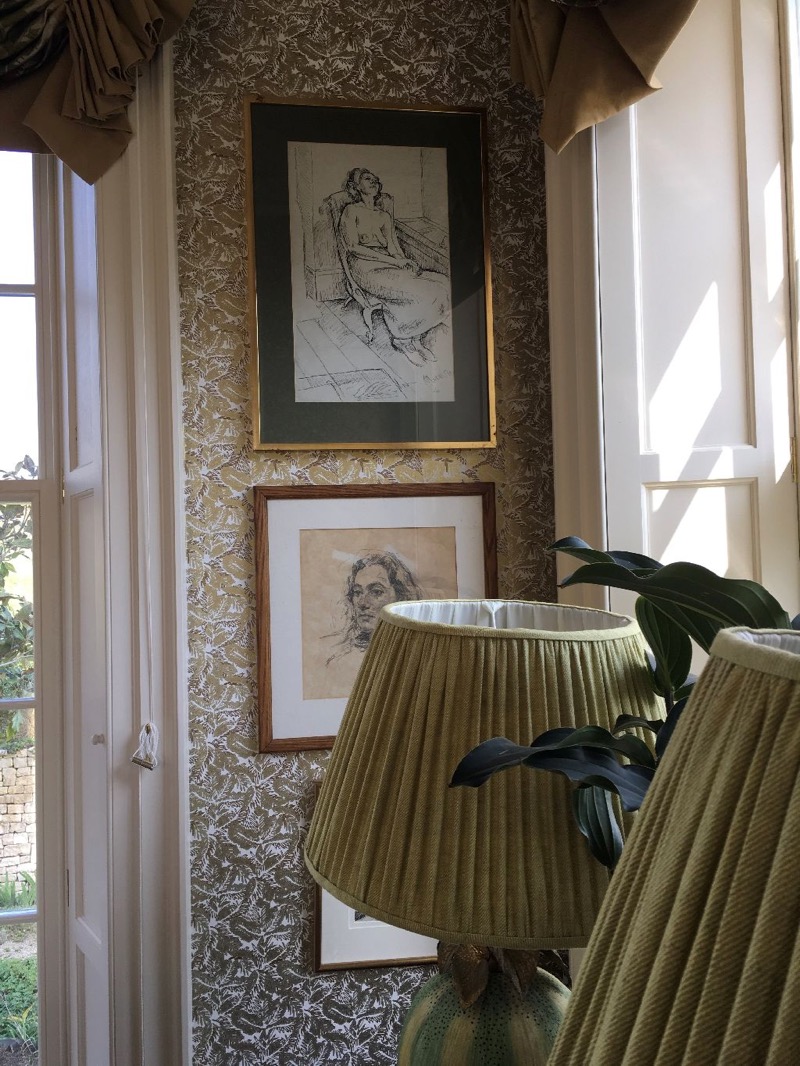 Portrait sketch of JET by Wolfe

Wolfe painted Jet many times with and without clothes on. We recently found this rather odd drawing of her by Wolfe in a dusty South London auction house, she, reposed in middle age with sturdy shoes, tweed skirt and no top on. 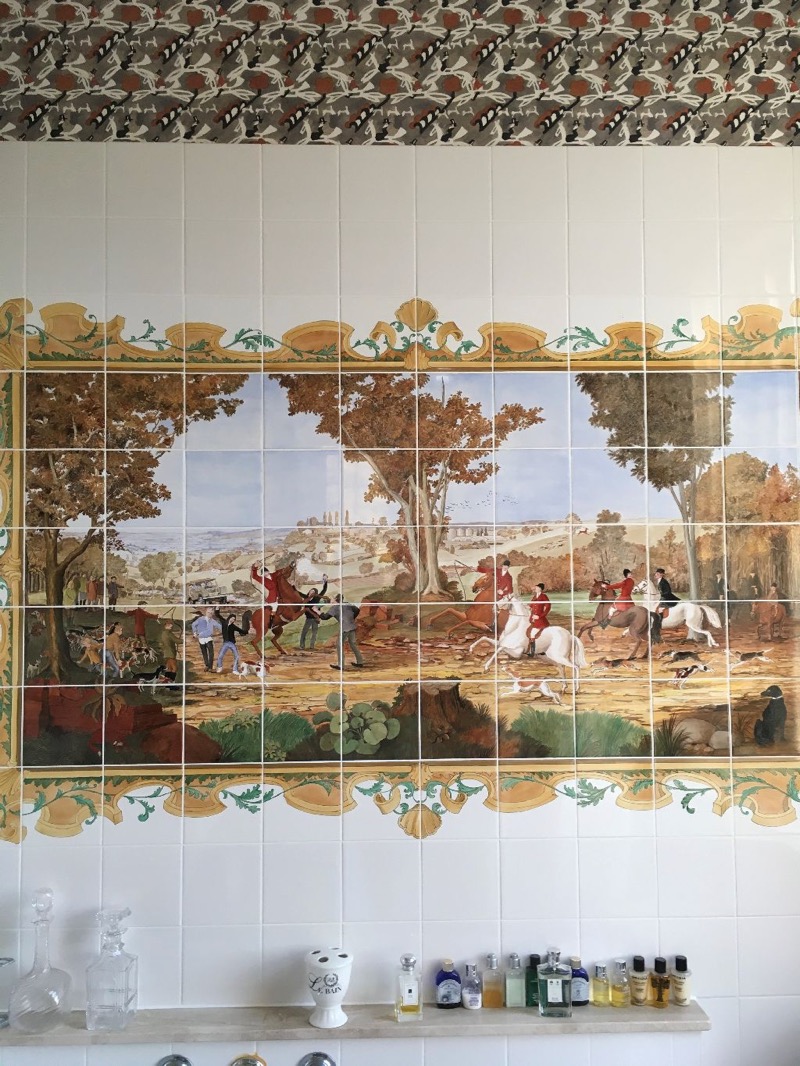 Who knew that 25 years after her death, my grandmother’s forgotten work would become such a great influence on me.  Her vision has subverted my taste away from the classical fluttering pretties and palette of the English Country House movement to another between and post war era embracing the different cultural European influences of Moore, Matisse, Sutherland and Picasso, although my passion for John Fowler remains firm.

My Mother would have described our motley collection of Aubussons as “going-home,” splitting, threadbare and stained. 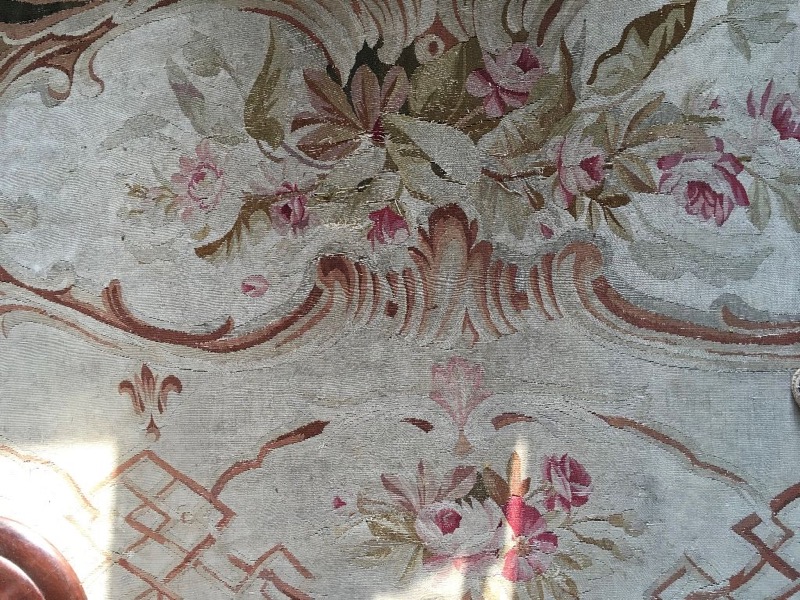 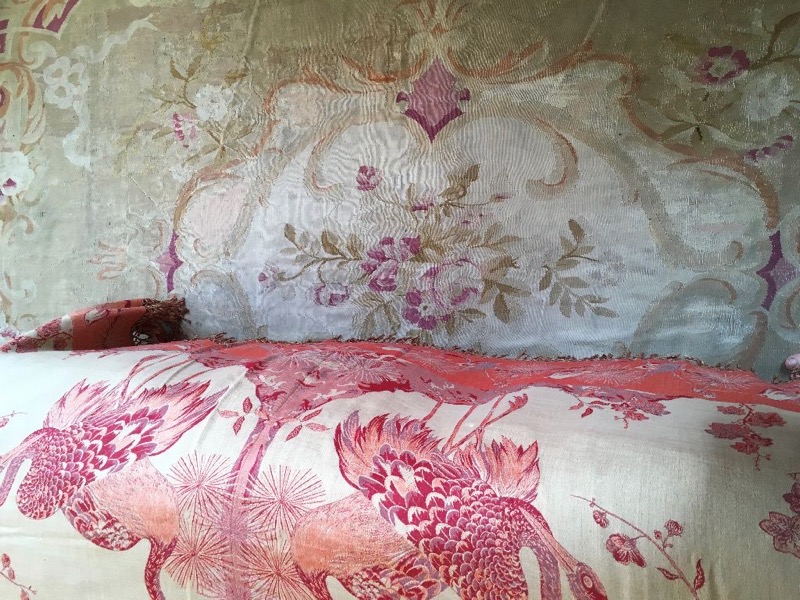 The big one in the drawing room with faded, browning, blousy blooms came from a house in Norfolk by way of friend and Independent Art Adviser, Charles Bingham-Newland. It was reported that the modest proceeds were deployed to help restoration of “the good one”. Muddy dogs naturally gravitate towards this canine friendly floor cloth and wine and coffee is regularly spilt without guilt or remorse

Some of the elements of the house are period, found in strange reclamation yards. Since the outside is made of stone, we wanted fireplaces of wood. 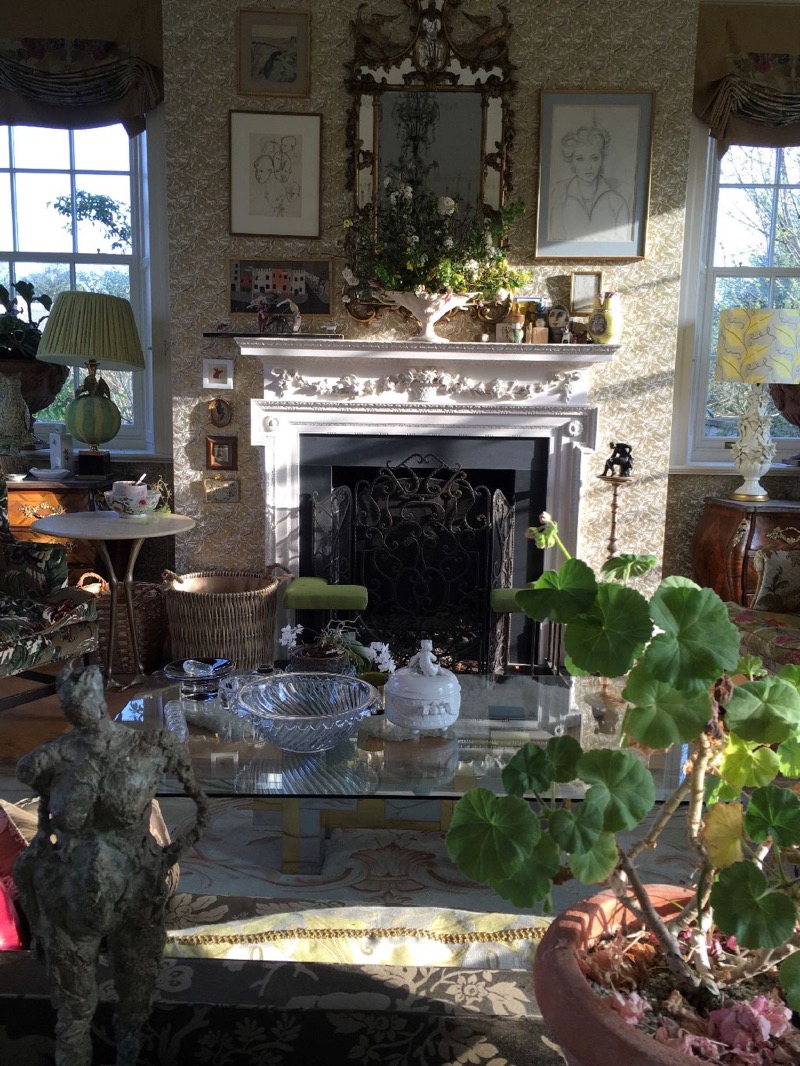 Nick Gifford-Meade, then in Pimlico had the shelf of a chimney piece carved with a favourite motif of basket of flowers, around which we built our drawing room fireplace and was rumoured to have belonged to Cecil Beaton. Years later we found a photograph recording the chimney piece in Beaton’s bedroom at Redditch. 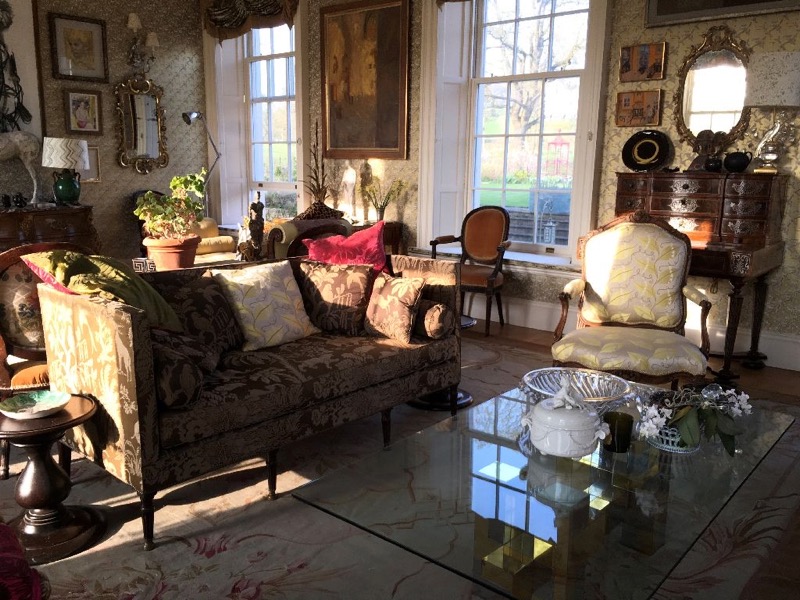 At certain times of the year, the late West light directly illuminates the treasured carved surface and hits the ghost of his careless fingerprint left. 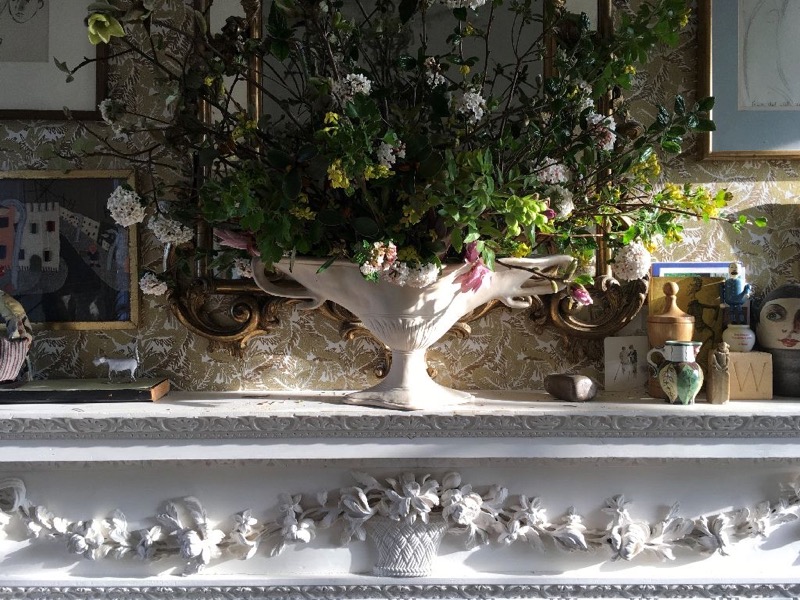 Above the C18th century version of a basket of flowers is often a C20th version by Constance Spry, a comparatively shrewish, ‘hands on hip’ shape of vessel demanding notice, spilling over with seasonal clippings from the garden.

Grotto expert, Diana Reynell made the chandelier in the dining room. 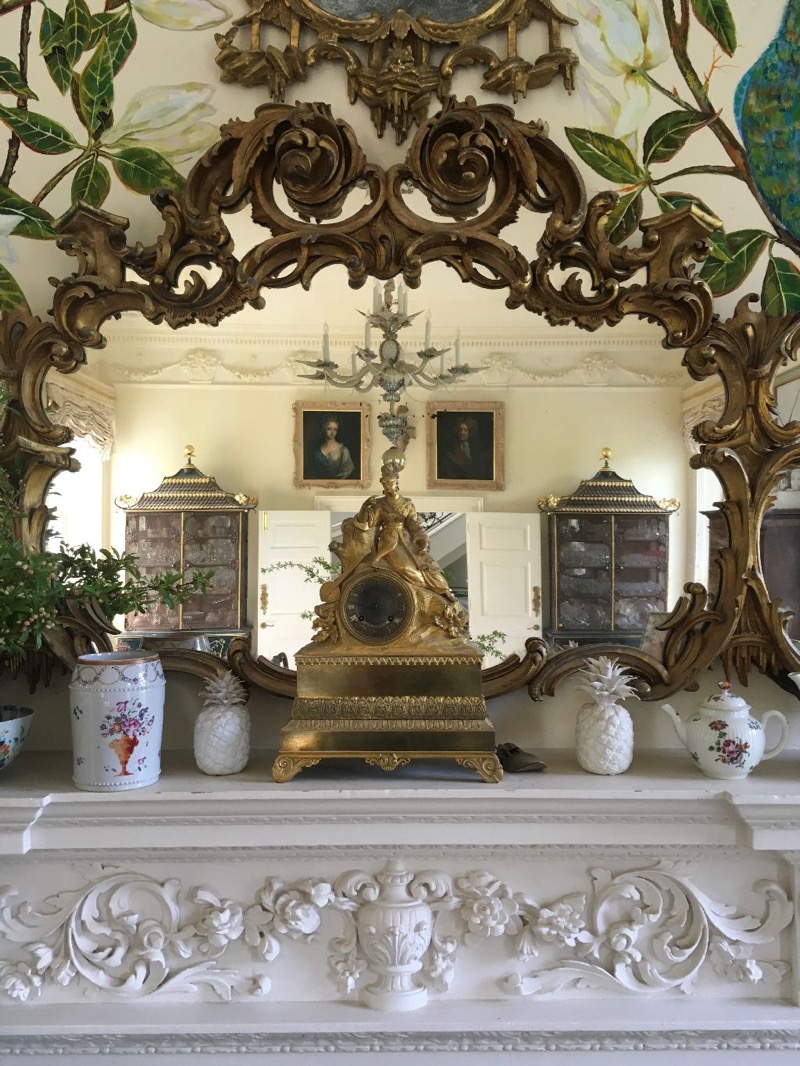 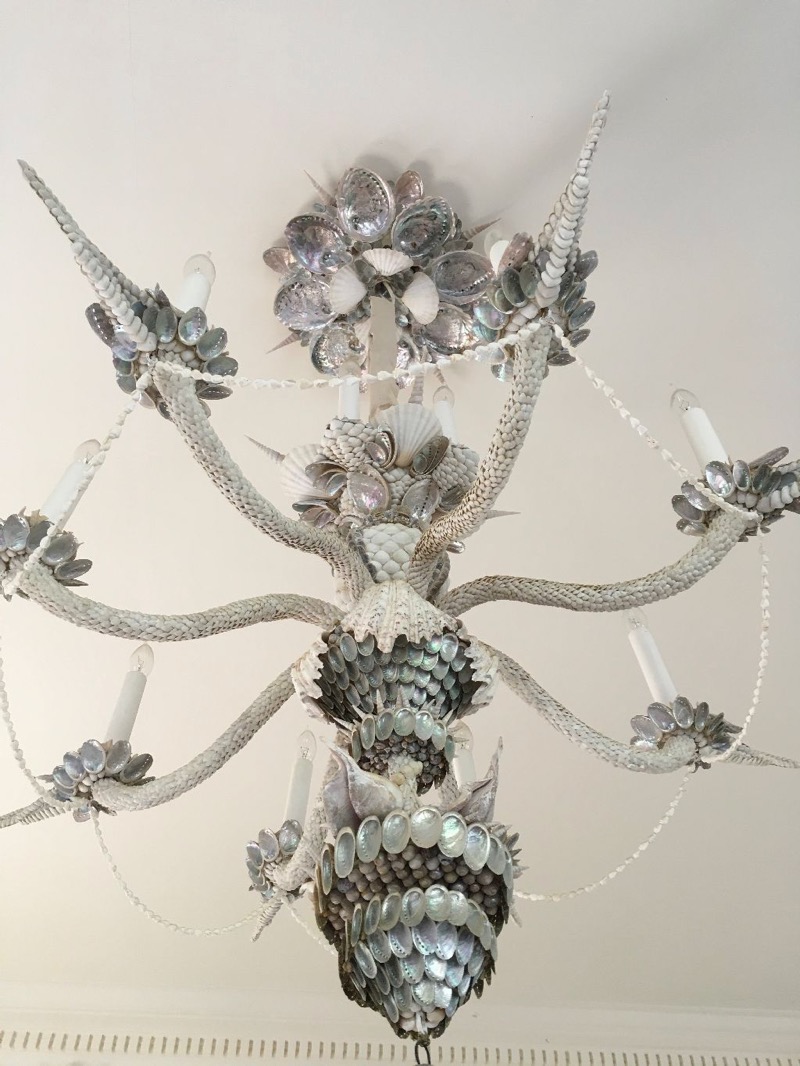 A beautiful and fragile octogenarian arrived with her electrician and two other young men, who pushed her up onto a scaffold, as she, in a finely enunciated voice, whispered “I think this is my swan song”, humorous, as bird form had been the inspiration of her design. 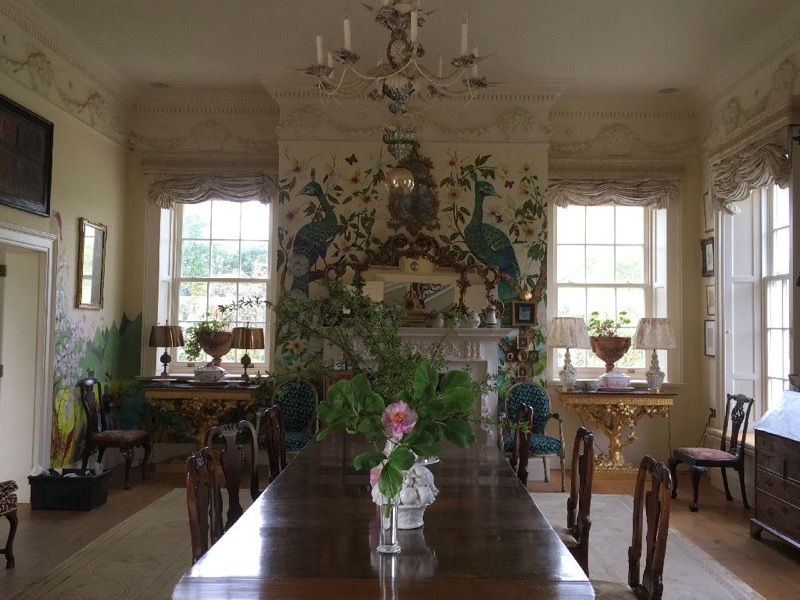 So we cohabit with these Design Heroes  of ours – friendly presences who dispel some of the loneliness during this period of enforced introspection  – focussing on a few, making a chain of memories, of times, people and skills, that root us into our  strange new situation. Thank goodness we do not live in an uber cool, perfectly chic, award winning monastic space, as that would send me to the madhouse just now.

All thanks to Susanna (who wrote this) and John White of Whiteworks Group.  The Jet Collection is online and at JET and Co, 20A Pimlico Road, Belgravia.

[All photographs copyright Whiteworks/bibleofbritishtaste. Excerpts and links may be used, provided that full and clear credit is given, with appropriate and specific direction to the original content.]