Reminiscences of my visit to Smedmore.

I stayed at lovely Smedmore House in Dorset, settled in its green declivity between ridge-backed Purbeck hills, in May. The first day was grey, with scudding wind and rain, but then the sun came out. This is a room in the old kitchen range, not much used now except for the occasional shooting lunch, a place where the guns can eat with their boots on. The wooden boards mounted on the wall are stall dividers from the eighteenth century stable block ( where a local carpenter now plies his trade), on which  generations of grooms and stable boys who worked and slept there have carved their autographs in copperplate.

The cooking apple-green entrance hall, part of a new front added to the house in the 1760s.

This ebonised chair was made by the celebrated George Bullock for the Emperor Napoleon during his lonely exile on St. Helena, an inherited souvenir or perquisite, brought back to Smedmore by the Colonel John Mansel, gallant peninsula officer, who was garrisoned there.

This is the side wall of the same room  – same chairs – rather more austere – as it was last photographed by Country Life, in 1935

The principal front. Behind it, the older parts of the house date from the seventeenth century, but the de Smedemores were living in a house on these lands in the 1300s. The estate has passed down by inheritance through seven centuries. 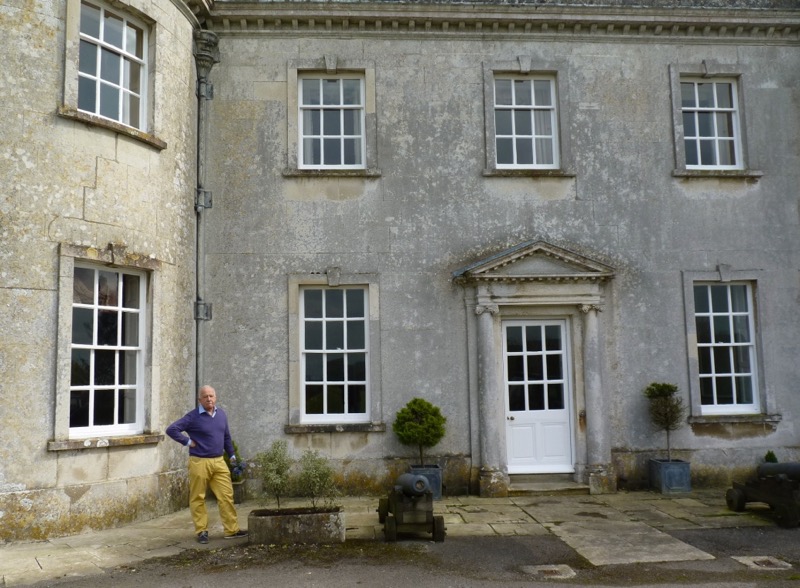 The old kitchen is lit by a tall,tripartite Vitruvian window,

but from the outside you can see that this window has probably been inserted into an even older building range.

The garden front, early 1700s, in the manner of Christopher Wren.

Where you would expect to find dogs’ graves there is the tombstone of a long-dead tiger in the  grass under the trees.

The long table behind seats twenty comfortably. The plasterwork is by the Bastard brothers of Blandford.

This Tinteretto-pink on the walls was mixed  by Philip’s friend, the late, great Gervase Jackson-Stops, taste maker and scholar. The colour becomes lighter as it rises up the walls to the ceiling.

A guest here in 1878, J.B.B., left this little album of sketches entitled,’ Reminiscences of my visit to Smedmore.’

Philip is the creator and curator of this family museum in a corridor leading to the Butler’s Pantry. The head of a long, long-dead rhino is a grisly thing, sans horn.

Yellow water iris in the blue and white vases were picked from the margins of the pond outside. Philip has brought colour back to the house with oriental ceramics and Ottoman carpets from Istanbul. 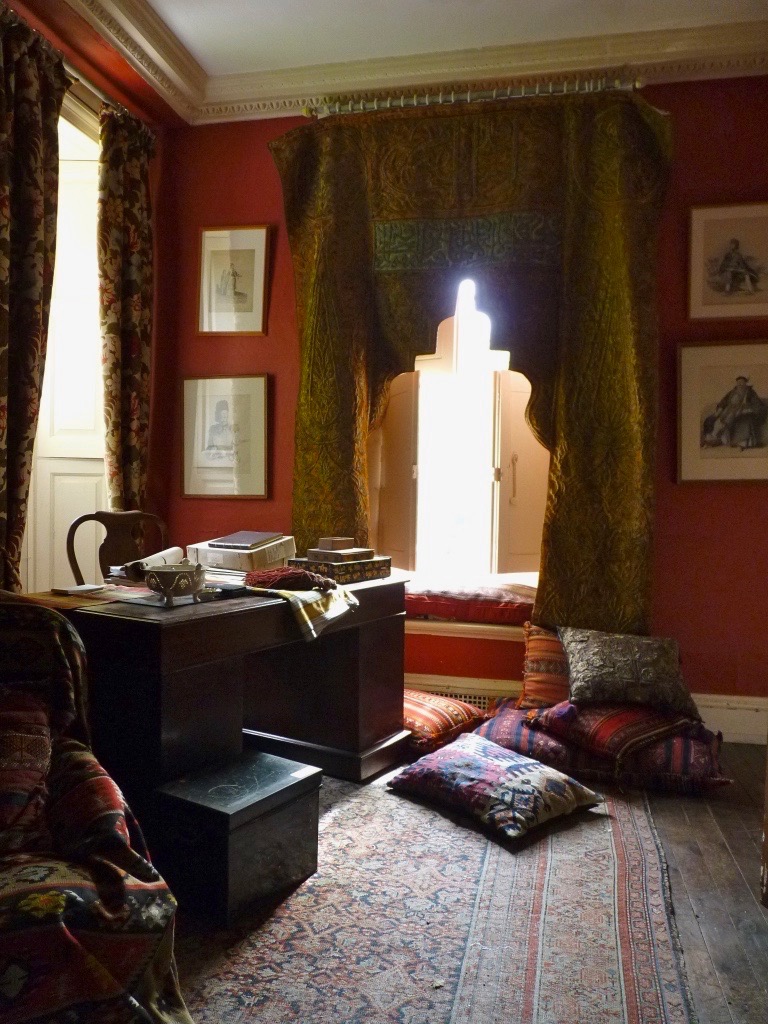 The Cedar Room with some of the cargo of furniture and paintings inherited from Lady Elizabeth Villiers, who left everything to her Mansel niece..

Souvenirs of the past, pince-nez, spectacles, reticules, reels of embroidery silk, notebooks and diaries crammed into every drawer.

one evening I went out for a pint of beer and found Corfe Castle, looking like a poster for the Dorset tourist board.

that night the moon was full and close 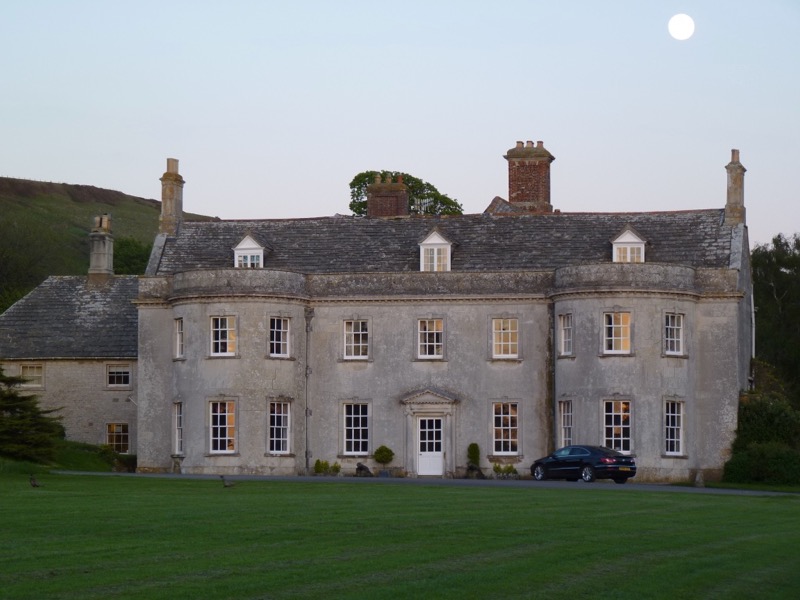 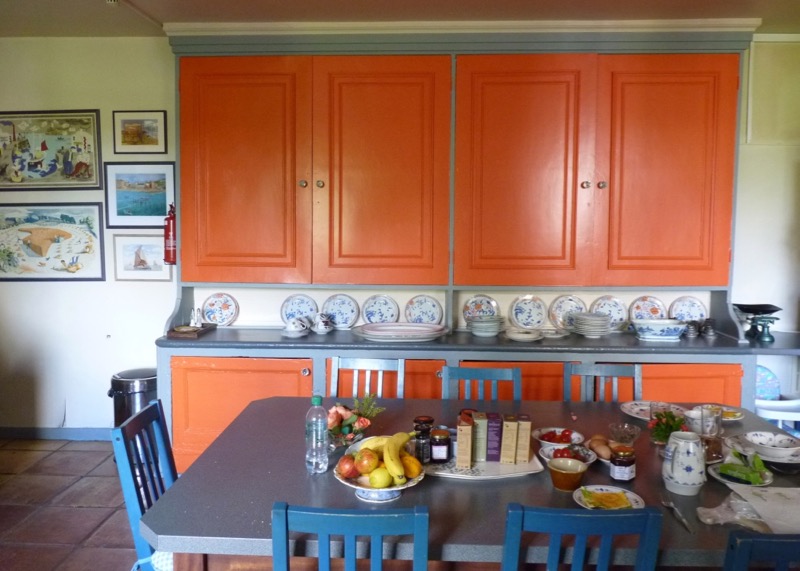 Working breakfast in the kitchen

and after, ship-shape from the ministrations of the housekeeper.

Off-limits, a pantry in the old kitchen range

The bedroom corridor, miscellaneous  furniture washed up, waiting its turn. Note the crossed sabres, last seen in the entrance hall in Country Life’s photograph of 1935

My pink bedroom, with the most exquisite rococo fireplace 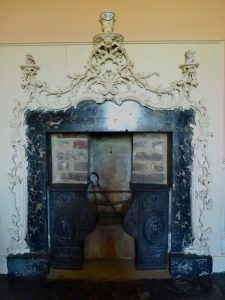 the paneled bathroom corridor, in the older, rear of the house

a blue bedroom with traditional English backup heating, although the central heating at Smedmore is fiercely powerful

Behind the stable block, a small craft beached amongst nettles

the stable arch and nature rampant

work yard off the back drive

A long allée or ride leads away from the house, cut through woods to give a view of the sweep of Kimmeridge bay (part of  the Smedmore estate along with the village of that name), and beyond, towards France.

On the left is the Clavell Tower, a folly pr perhaps an outpost for smuggling, built by an ancestor, the Rev. John Richard Clavell. Thomas Hardy took his first love Eliza Nicholl there, and the building inspired P. D; James’s thriller, The Black Tower (1975). Twenty years ago it was derelict and poised to topple as the soft, shaley cliffs beneath were eroded by the sea. Philip’s friends advised him,’Let it go,’ but instead he worked to have it transplanted 25 metres inland.Now you can stay there, courtesy of the Landmark Trust.

Verdure, cow parsley and cuckoo flowers (Red Campion) grow in wild abundance. Smedmore House can be rented for holidays, weekends, house parties or weddings when Philip is not in residence. The house and gardens are open to the public on certain days, which you can find on the website. Read more about Smedmore in the September issue of World of Interiors.  All images copyright bibleofbritishtaste.com