Eloise and Will Palin live in an old house in Spitalfields. It was built for a Hugenot silk weaver in 1717, one of the refugees from religious persecution in France who colonised the area then, and its beautifully proportioned rooms were paid for by yards and yards of lustrings, satins, paduasoys, watered silks, black and coloured mantuas, ducapes, watered tabies, and stuffs of mingled silk and cotton, which previously could only be had from the famous looms of France.

I could write you a short essay about the waves of incomers who have come and gone and made their mark on these houses since then, Jewish, then Bangladeshi, conservationists and Young Fogies and now hedge funders, property developers and trendy architects, but you will find all this and much more in the pages of the highly recommended Spitalfields Life, courtesy of its gentle author.

The only drawbacks of living in this neighbourhood now, are wafts of curry drifting in through open windows from neighbouring Bangladeshi restaurants in summer, and the house’s deep front window sills on which tourists following Jack the Ripper guided tours leave half drunk cups of tea.

As Will  wrote in 2009 in one of his columns in Country Life, when he eventually began restoring the house’s paneled hall about fifteen years ago the tree trunk jacking up the decaying staircase  – an emergency measure put in by  previous owners to prevent the stairs collapsing – had to go.  He kept it for a while in the garden. Then during a particularly cold January, he chopped it into firewood and it heated the house for weeks.

The ground floor’s original paneling had vanished too, sometime in the 1970s or 80s, leaving  ‘a large, forlorn, open room.’ Will has replaced or restored the joinery, fireplaces and wood paneling all over the house.

Above and below the half landing hang dozens of posters advertising the exhibitions put on by Will during his years as a curator at the Sir John Soane Museum.

The scrap screen in the first floor front parlour papered in old engravings came from a junk shop in Marlborough, the stuffed canary was a birthday present from a friend.

The kitchen here would once have been in the cool rather gloomy basement, but now it occupies the south facing back room next to this dining room on the front of the house, which is paneled and painted a drab Georgian green.

The bathroom with acres of chaste blue paint covering walls and joinery is perhaps the most perfect room of all. 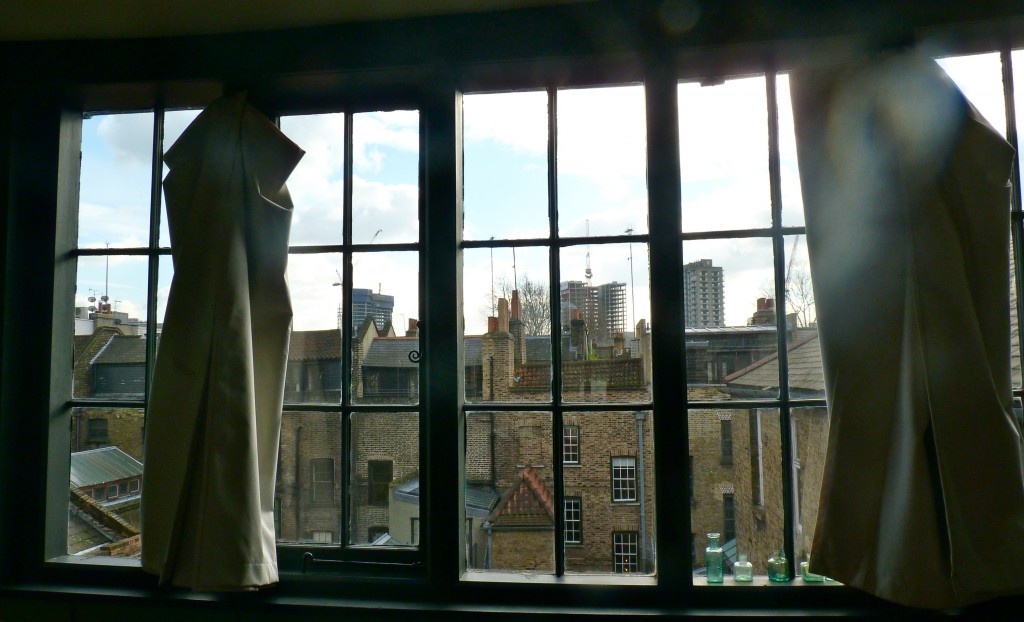 Wide casement windows built to light  the top floor weaver’s loft look across at the backs of houses in Princelet Street.

Eloise works as an architectural historian, Will is an architectural writer. As with the house’s restoration, the drab paints which they have chosen are based on authentic Georgian shades but nothing else here has been done by the book. All is comfortable and convenient and ideal and pictures and objects are there for their personal associations and utility, rather then for period correctness. It’s really, really nice.

[All pictures copyright bibleofbritishtaste / Will and Eloise Palin]