This is the London dwelling of John Martin Robinson, aesthete, architectural historian and controversialist. He holds the offices of Maltravers Herald Extraordinary, Librarian to the Duke of Norfolk and Vice Chairman of the Georgian Group ( tho he has just resigned on a point of principle). He is also a regular contributor to Country Life and a Lancashire landowner. His friends call him ‘Mentmore,’ after the huge Victorian country house built for the art collector and banker Baron Mayer de Rothschild, and sold up in the 1970s.

JMR is the author of a lot of outstanding books about country houses and architecture, many of them published by Yale. But in 2006 he produced a memoir of his childhood and early youth, Grass Seed in June, that was very different from anything he had written before. The quotations below are drawn from this interesting work of autobiography.

‘As a family we were Tories and Catholics. I still am – in a not entirely straightforward way. …The Robinsons had married into old Catholic families on their return to Lancashire. The Elizabethan martyrs were close to us. I knew the fields at Brindle where St John Arrowsmith had been captured and taken away to be tried and executed. It was all very near and very exciting. One could not have enough of the gory details of barbarous executions. We were proud of these brave Elizabethan friends, neighbours and relations who had died for the Faith…  In general I was useless at anything practical. A farmer told my father: ‘The trouble with that theer lad is he doan’t shape.’ I have never shaped. I don’t drive, I hate all games, I don’t type, I don’t take photographs. I can hardly dial a telephone. … A surprising number of architectural historians do not drive. They are too busy looking at buildings to concentrate at the wheel. I tried to learn but whenever I saw something interesting I tended to turn the car inadvertently towards it across the oncoming traffic…anyway, I loathe cars and the ghastly, selfish, atomised society they represent. Walking, buses and trains are morally better.’ As a car-hater, it came naturally to him to convert the former stable-cum-garage space in his mews cottage near Lambs Conduit Street into something less horrible. This is what he made, a kitchen and dining room, partitioned with a salvaged Gothic screen that he spotted being thrown out of a Curzon Street shop in the early 80s, when he was the GLC’s historic buildings Inspector for Westminster. Note the cunning use of mirror paneling in the door to maximise light and create a greater illusion of space, and the adorable seersucker tablecloth. The jumble sale plates on the kitchen wall were one of his first childhood purchases, costing him sixpence. The painting of the four-towered church of St. John, Smiths Square, designed by Thomas Archer, is by the late Julian Barrow. To the right is a corner of a watercolour of Croome D’Abbot Church in Worcestershire, by Capability Brown and Robert Adam, painted by the talented Alan Dodd, who specialises in architecture; above is Brocklesby Mausoleum, painted by Royston Jones.

Here is the other end of the dining room, photographed in the wintry light of December 2013. The jolly nice 1790s mahogany chairs by Gillow came from an antique shop in Kirby Stephen in Cumbria.

Some of the pretty plates are made of tin. In the centre of the bottom row is the Wedgwood commemorative plate that I gave to him, not because it was lovely (it isn’t very), but because it is decorated with the devices of the heralds who officiate at the College of Arms. 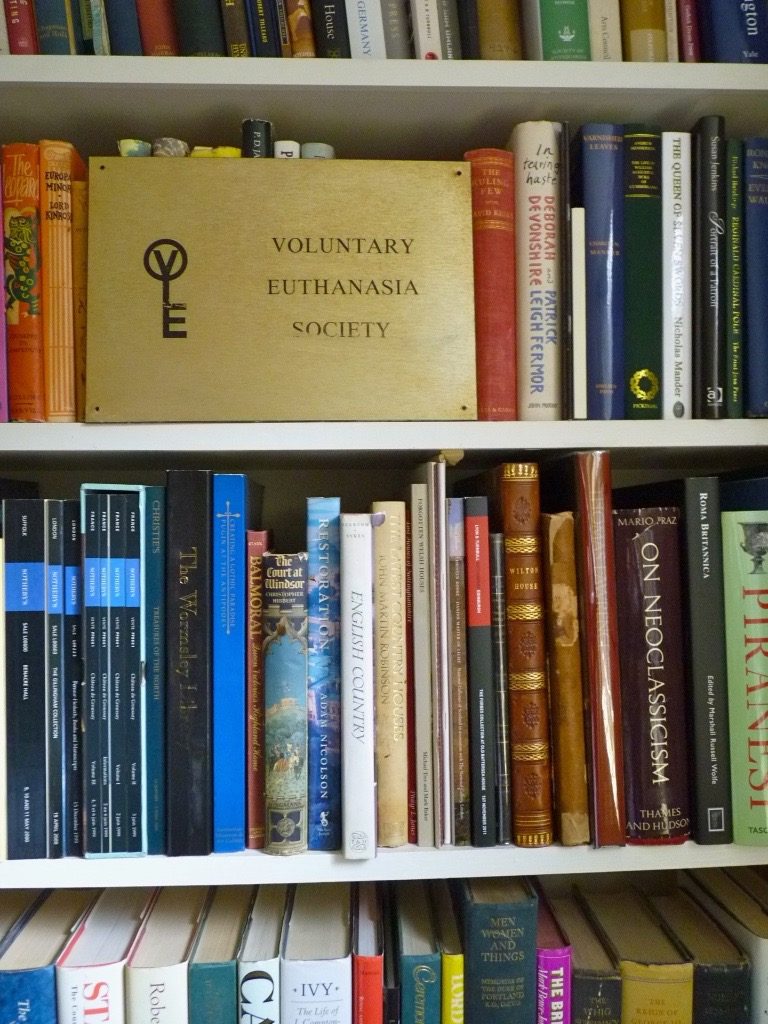 ‘My real education came sideways through the three Ls – the liturgy, landscape and libraries. … now I discovered ‘Architecture’ and the Georgians in particular. Apart for Country Life, I can attribute it solely to one book, Ralph Dutton’s pioneering The English Country House (1934), in the Batsford series. The photograph of Wentworth Woodhouse, intriguingly described as ‘the largest of the genus,’ did it. As soon as I was able I was determined to go and see the place.’  How the plaque arrived here from its original setting outside the Kensington front door of the Euthanasia Society’s offices is not clear. JMR”S latest book, Requisitioned, features Wentworth Woodhouse on its cover. 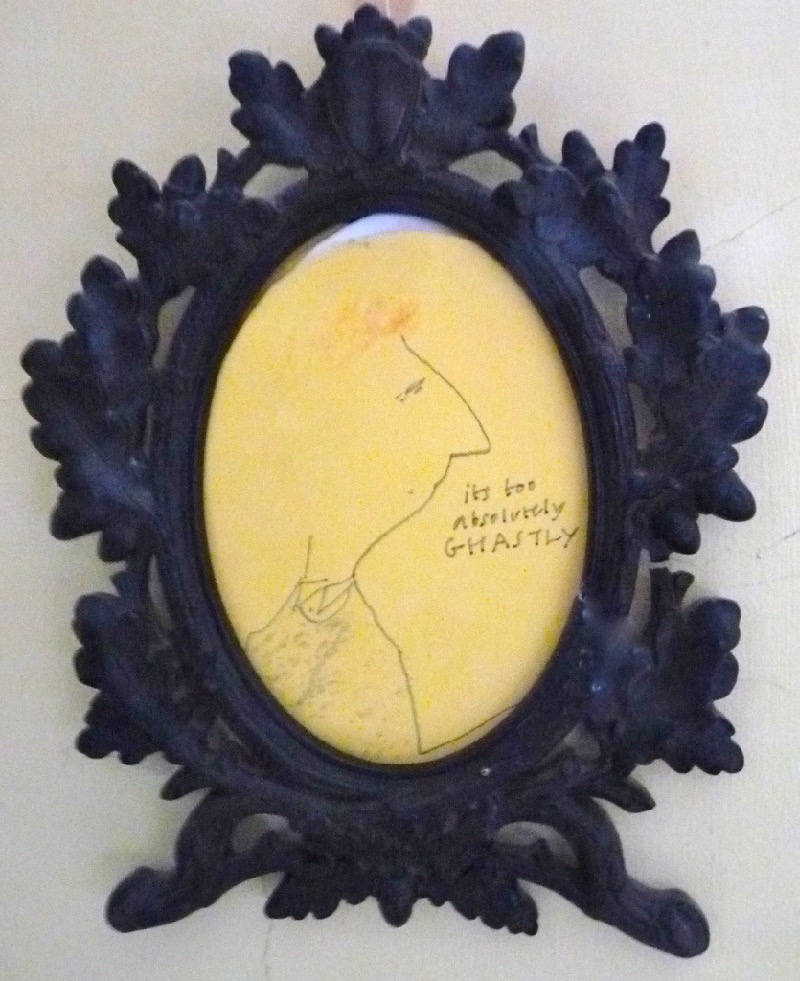 Miniature of JMR by his friend the artist and wit Glynn Boyd Harte, ‘It’s too absolutely GHASTLY,’ the original is mine and I framed this copy for him. 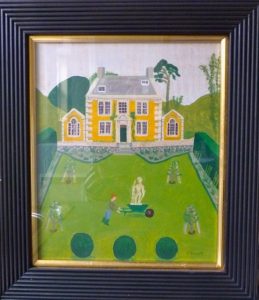 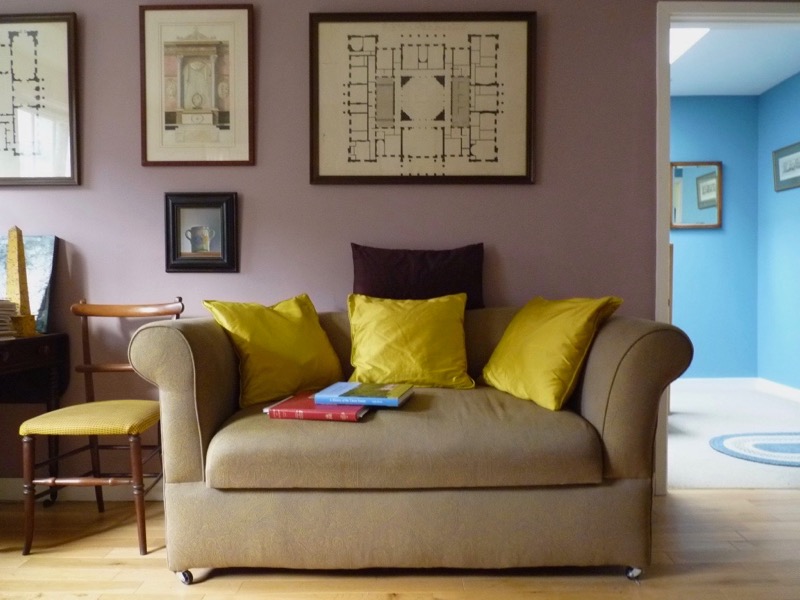 John is rather good at buying nice things and decorating the houses in which he lives. When he was wondering what career to take up, this seemed to represent a distinct possibility. Had he followed this through, he could have had secured a reputation as the shortest-tempered interior decorator in England, for he is red-headed and as he freely admits, ‘Redheads have one layer of skin less than normal people. 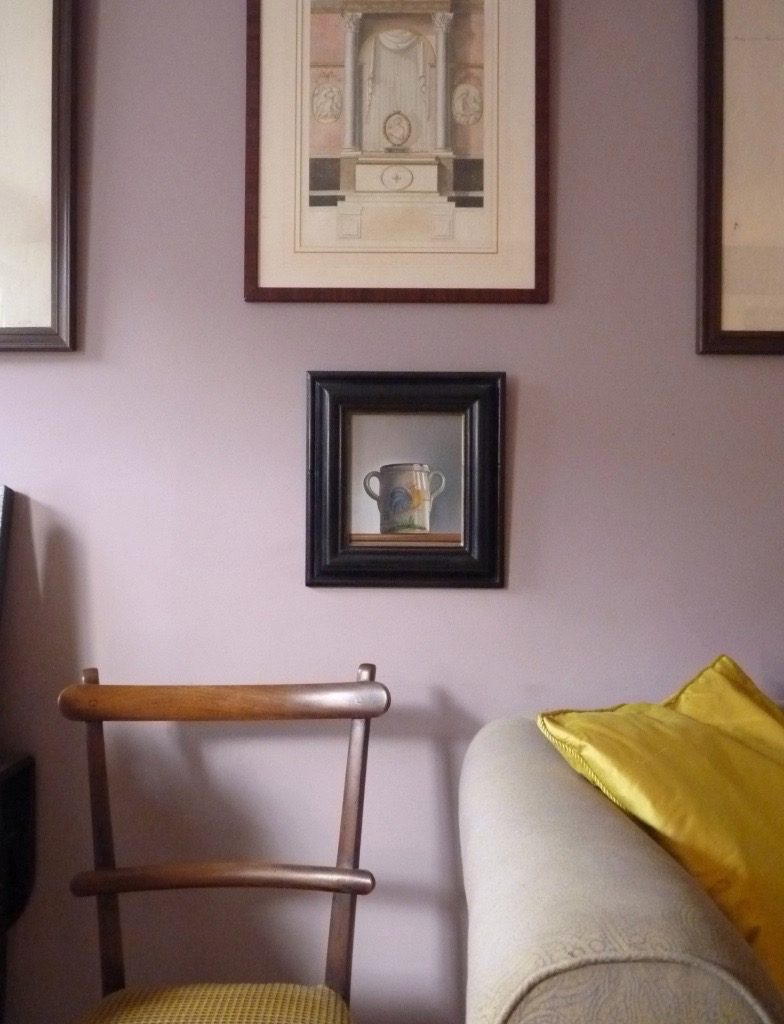 When JMR went up to Oxford he discovered that, ‘ many of the finest Georgian interiors had been redecorated by John Fowler or under his influence. His sort of approach is now frowned on, but it had much to recommend it, combining historical knowledge wit artistic flair and a good sense of colour and tone, too often lacking in later, over-researched restoration of historic interiors. At the the time Fowler was one of my heroes and I thought of working for him. He was encouraging, but sensibly advised me to stick to academe at least for the time being. He had a reputation for being difficult and overbearing but I found him kindness itself. He invited me to lunch in March 1970 and I spent the day with him at King John’s Hunting Lodge, a small, eighteenth century Gothick folly in north Hampshire which he had restored and used as his country retreat…. the whole place with its garden topiary, painted furniture and understated elegance struck me as the acme of civilised perfection.’ The Hunting Lodge is now the home of Nicholas Haslam, who has preserved the best of Fowler’s arrangements while making it yet more vivid and comfortable. 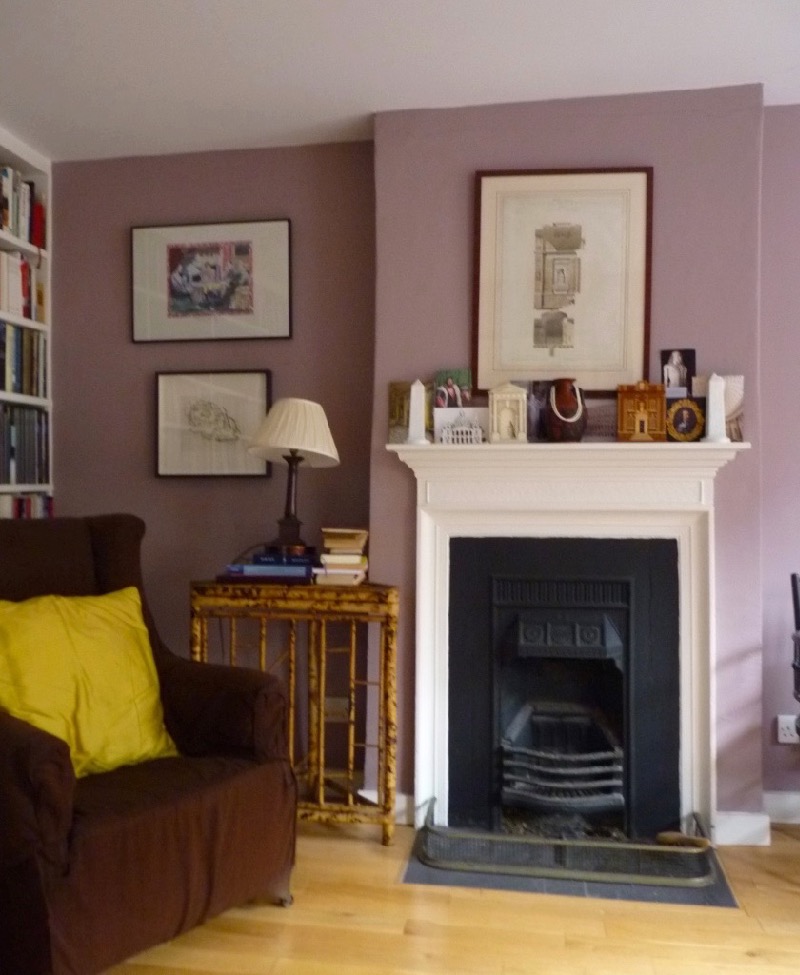 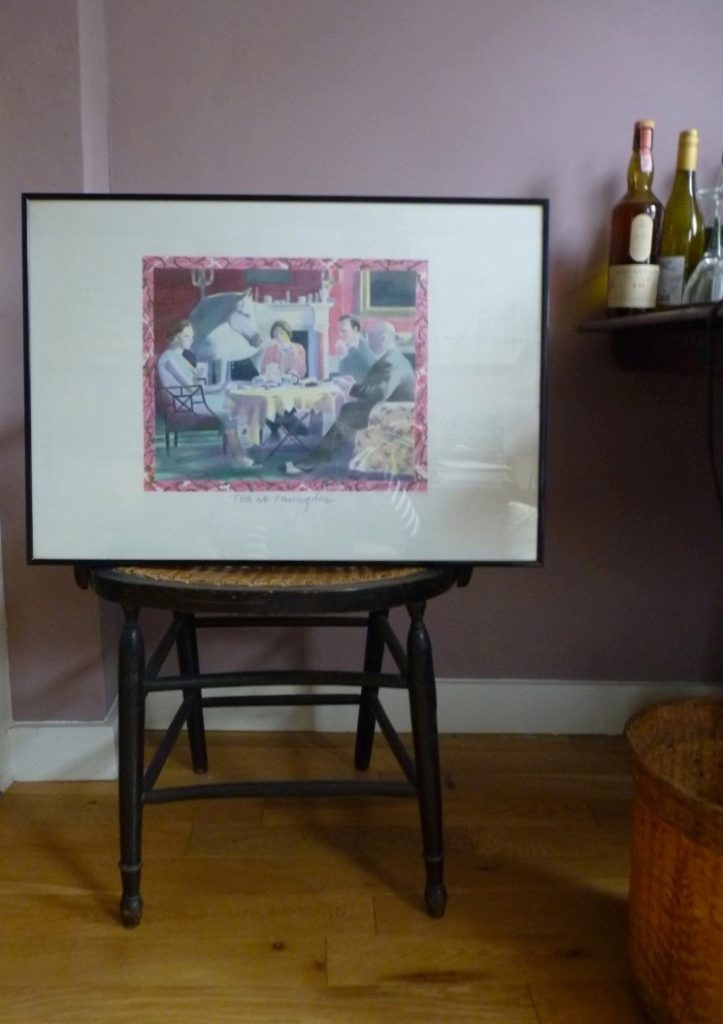 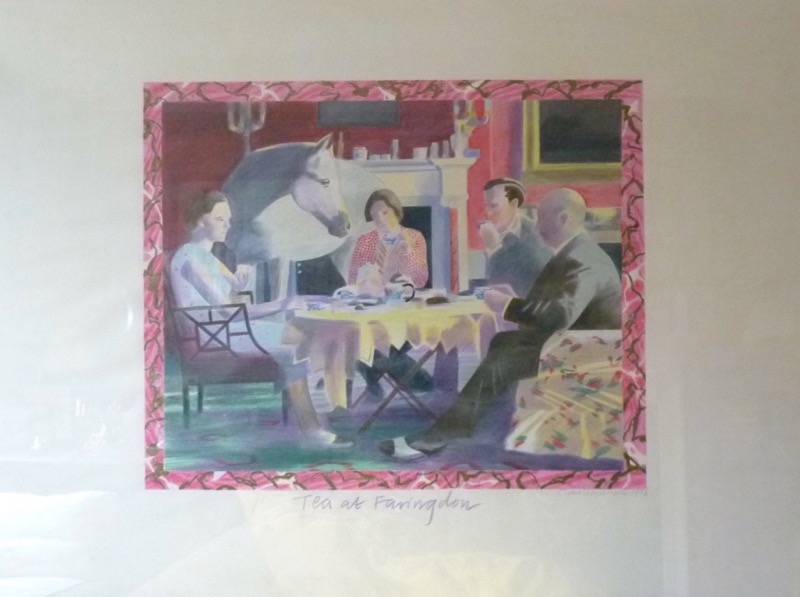 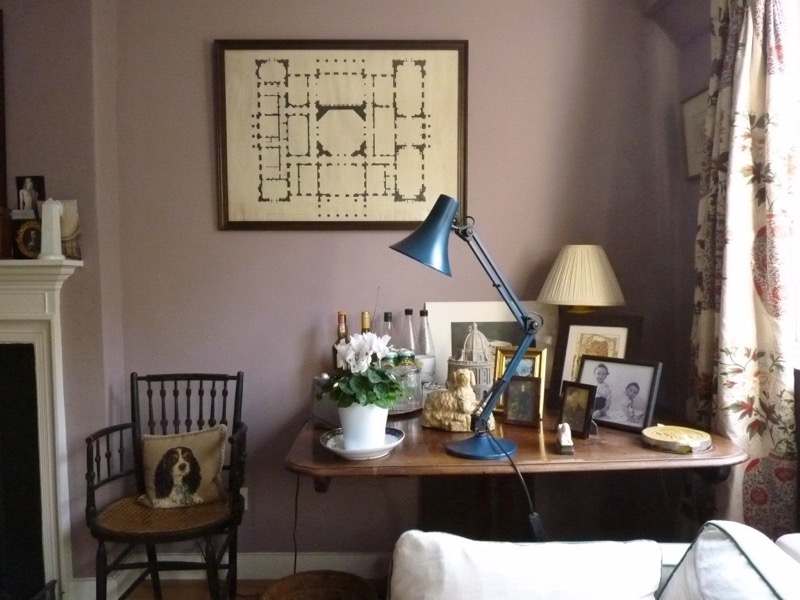 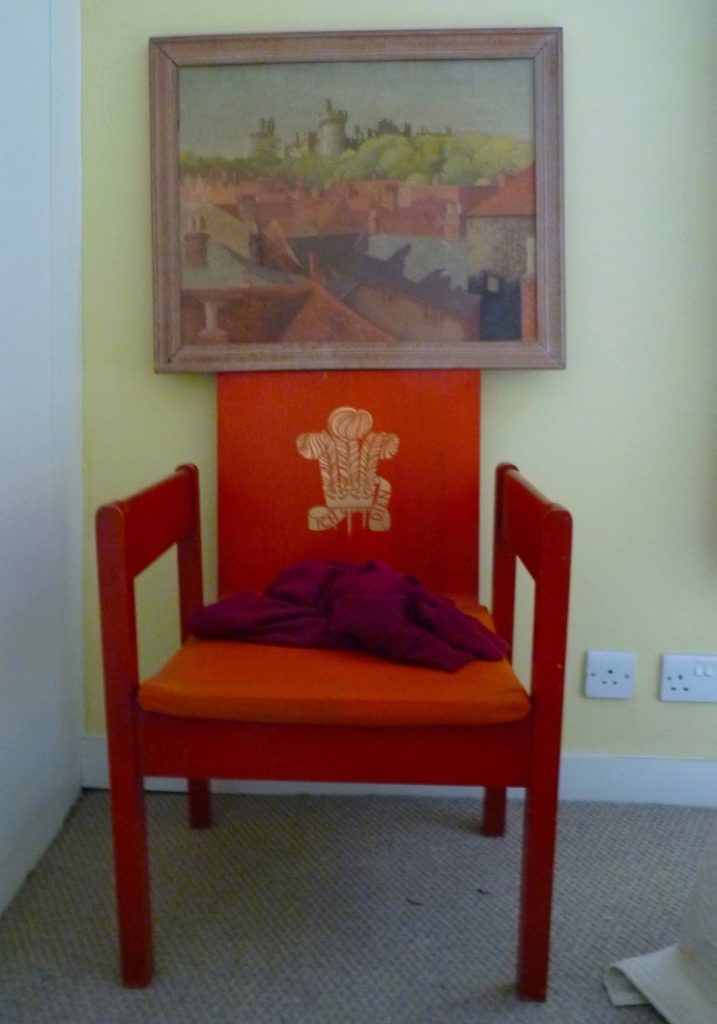 Here is a tomato soup-coloured chair (which I sold him) designed by Lord Snowdon and made for the Investiture of the Prince of Wales at Caernarfon Castle in 1969. Propped above it is a painting of the west Sussex town of Arundel with its castle, found for him by the Fitzwilliam Museum’s director Tim Knox at Portabello market. Every week on a Wednesday JMR catches the train to Arundel, where the towers and turrets of the castle hang over the town. Arundel Castle is one of the longest inhabited buildings in England and has been in the possession of the Howard family since 1138. A few years ago Julian and Isabel Bannerman designed a new garden full of curious 17th century conceits, in memory of the ‘Collector-earl’ of Arundel. JMR’s occupations there are essentially peaceable, usually taking place in the muniment room in one of the towers stuffed with documents going back to the 12th century, but his vision of England is of a country where martial tendencies are still latent :

‘In the course of the last three centuries of generally advancing tameness, the British deliberately and calculatedly kept alive and nurtured a primeval, male, barbarous streak in all classes as being best suited in the armed services, buccaneering and industrial-imperial life in general. ..This explains why the young British male, even today, is so much more of a violent, medieval, throw-back than his European, homogenized, social-democratic opposite numbers. Whenever I witness rampaging louts, glass-smashing yobs, vomiting football crowds, my heart swells with native British pride. We are not militarist, but we are warlike.’ 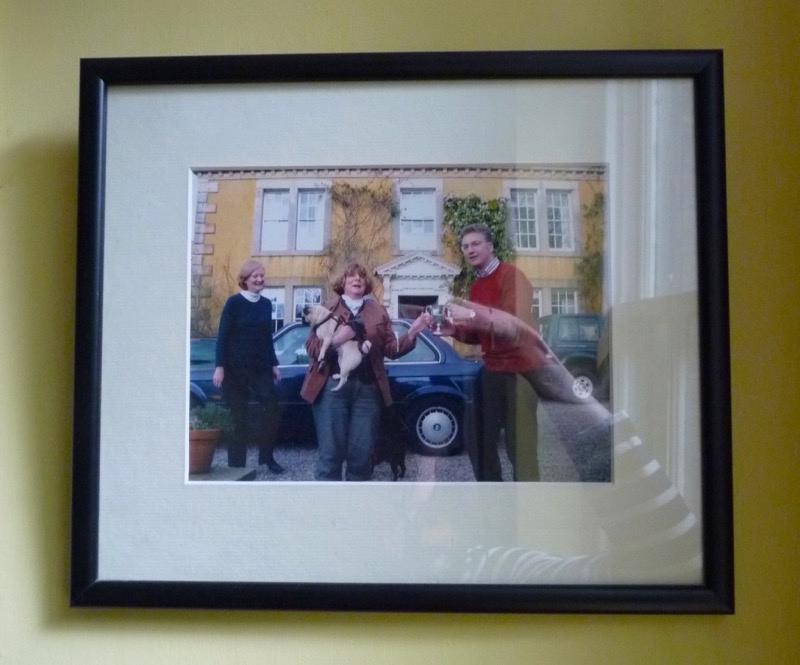 Last year, John Robinson  published the research on which he has been working since he was an Oxford postgraduate, James Wyatt, 1746-1813, Architect to George III, and organised an exhibition ( with the Georgian Group)  on the same theme in the famous  Yellow Room at Colefax and Fowler. The colour on the walls of the Yellow Room was the inspiration of Nancy Lancaster, who bought out Sibyl Colefax when she retired, and John Fowler, paint wizard, who stippled many coats of paint on the walls and then glazed them, giving this electrifying sheen.
Also on show was this scale model of Wyatt’s Gothick masterpiece, Fonthill Abbey, made for James Wyatt, now belonging to the Bath Preservation Trust and usually on display in the Lansdowne Tower.

English Heritage lent chairs, tripod flower stands, demi-lune tables, a  torchère and looking glasses from Heveningham Hall. They had been in store since the 1970s when the hall and its furniture were acquired from the Vanneck family by the government. Michael Heseltine, the Secretary of State for the Environment at the time, oversaw the transaction. The Department of the Environment failed to find a solution for the house, and it was sold again in 1981.
Also for sale were these watercolours of the plasterwork ceilings at Heveinngham by Georgian fanatic and artist Royston Jones.

Long ago as a junior curator at English Heritage I spent three claustrophobic days immured in the attics at Audley End House, where hundreds of pieces of Hevengham’s furniture had been taken into storage while everyone wondered what to do with it. Royston Jones and his partner Fiona Gray were taking measurement of every spindle, strut, arm, leg and moulding in order to fabricate a series of scale models of them all, and I had been left in charge of them. I don’t know if they ever finished this exacting task.

The photograph of Wyatt’s hall at Heveningham was taken by by Alfred E. Henson for Country Life in 1926. His clever trick was to throw a bucket of water over the marble floor, bringing its colours and patterns into gleaming high relief. 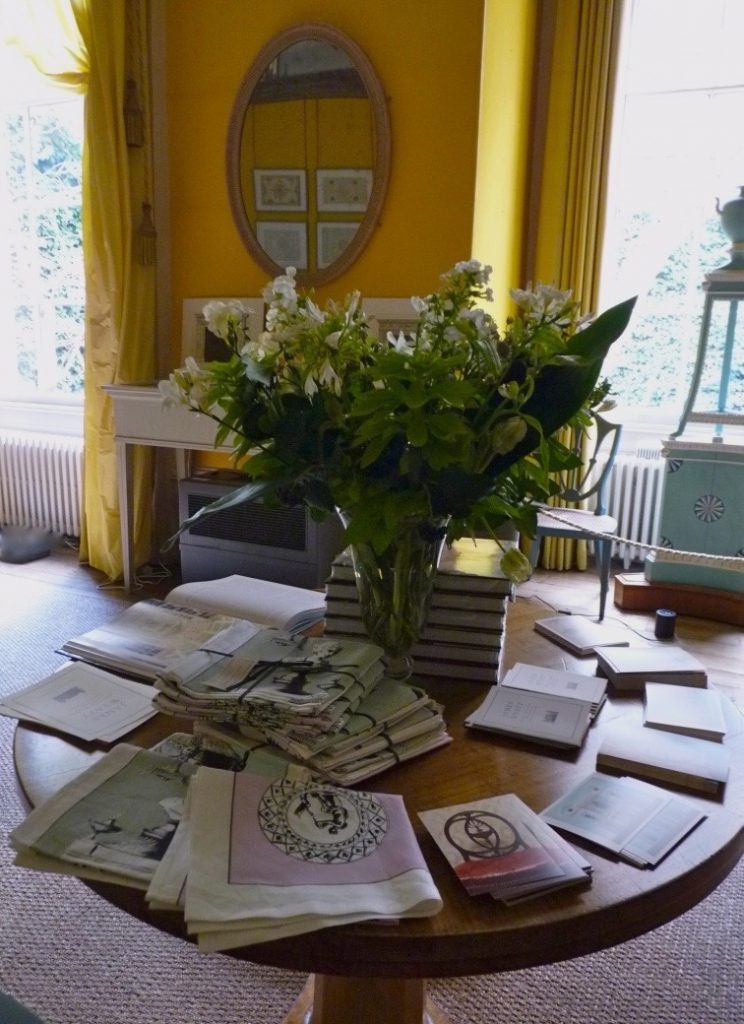