I found my house in Stockwell 20 years ago. It’s an early Victoria terraced house second from the end, with steps up to the apple green front door and a ground floor bay window on metal stilts. 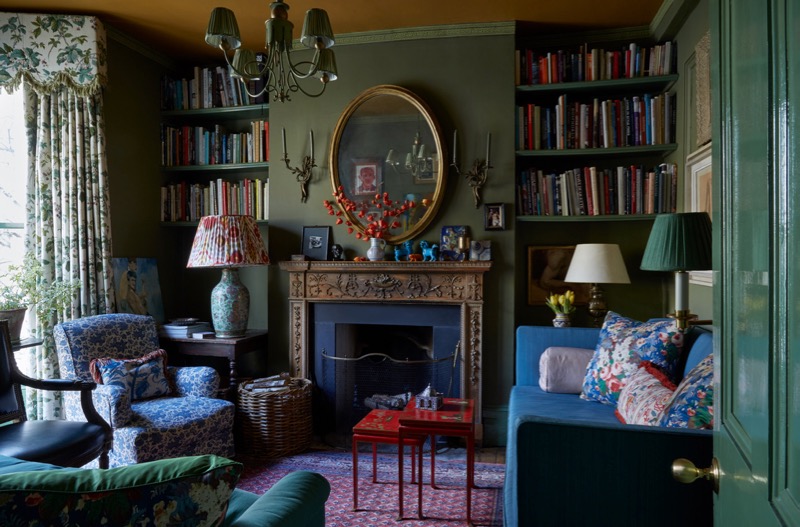 There was a for sale sign outside the house I noticed when visiting my good friends Rohan and Catherine who lived next door. Amazingly they had been given keys by the owner, so straight in we went. 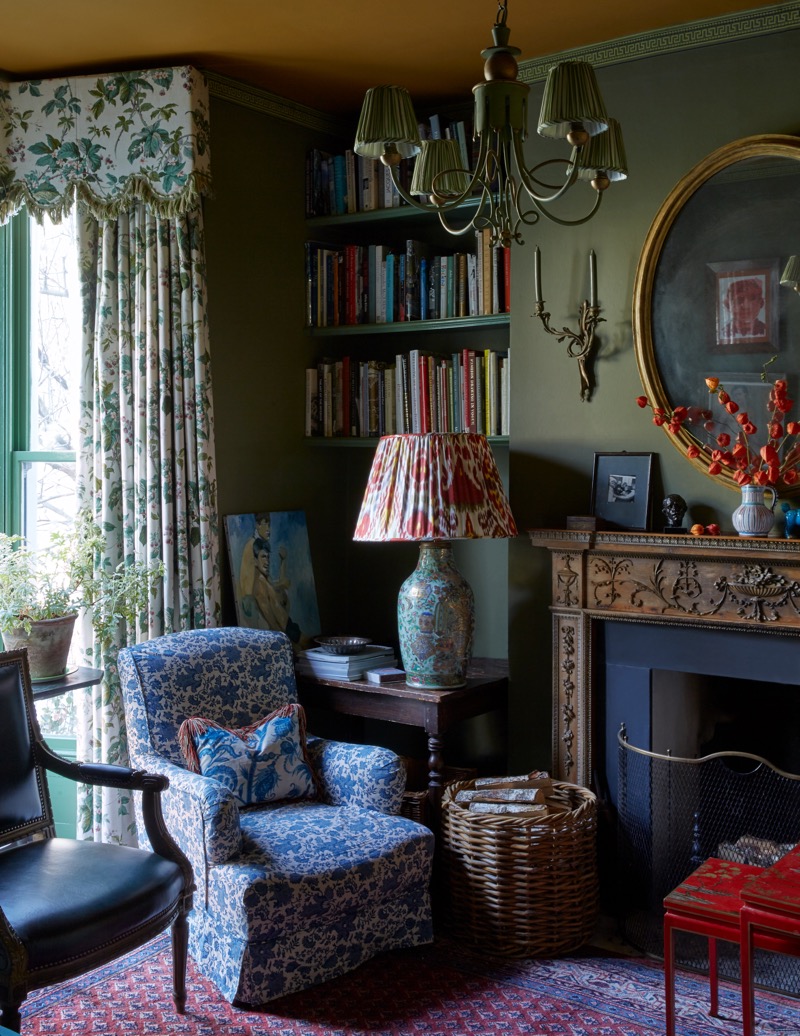 The house was totally empty, not a stick of furniture just the bare bones.I remember is so well, it was an early summer afternoon and the sun was streaming through the back sittingroom window and it looks so welcoming.The house had been rented out as bedsits with a shared scuzzy kitchen in the basement, which led into the garden. 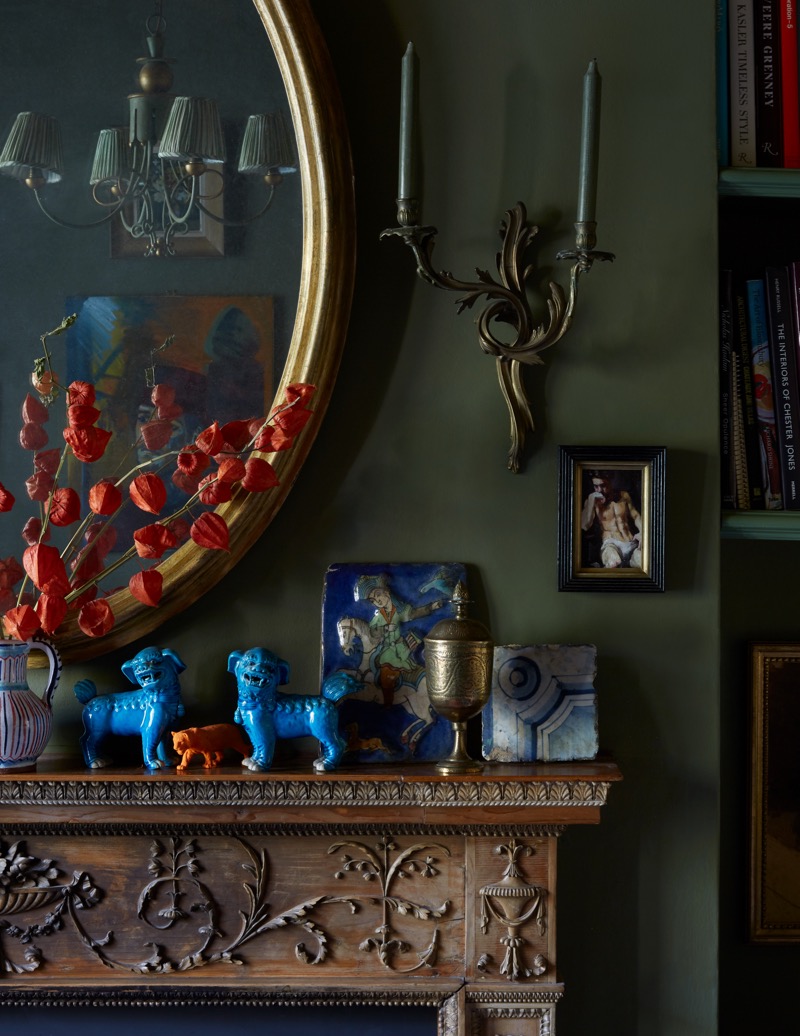 Most of the original features were still intact, all the floor boards were exposed, each room had forgettable Victorian fire places, which over time I’ve up graded. One of my favourites is an unpainted carved wooden surround which I bought from the Colefax and Fowler leaving Mount Street sale, it’s in the kitchen, far too smart for the house but I don’t give a monkieys. 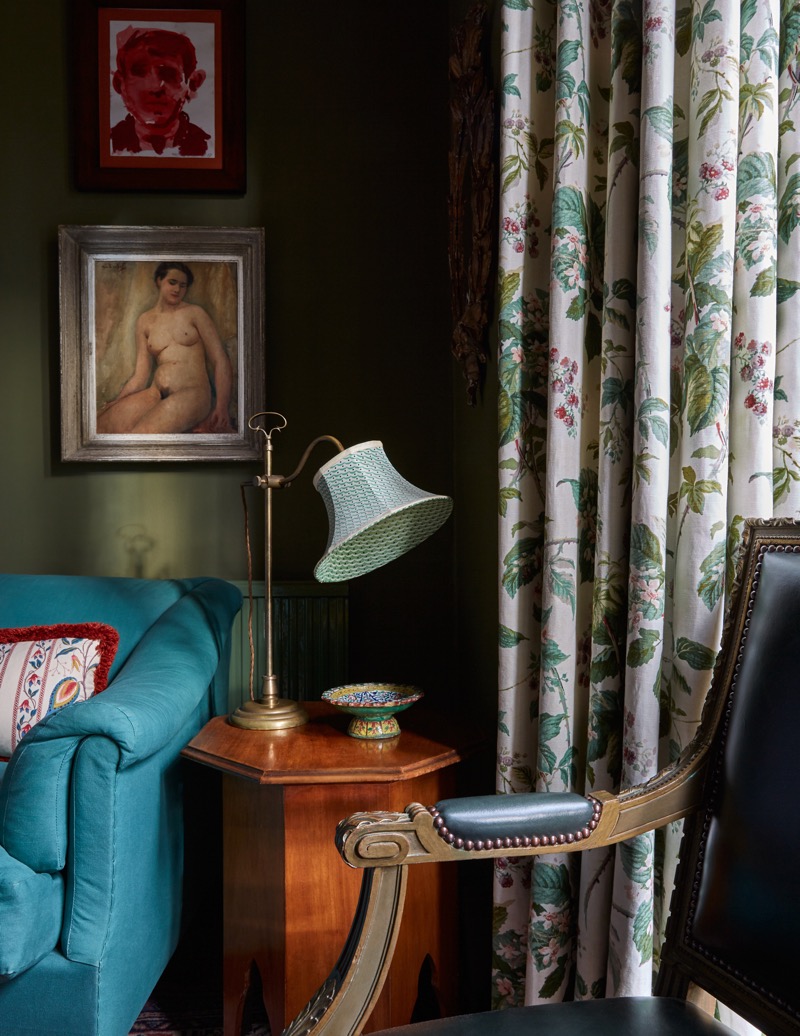 In the main sitting room I guess a painter had lived, who loved green oil paint. The floor boards were covered in Veridian green sadly not a favourite shade of mine. There are still specks under the rug today. 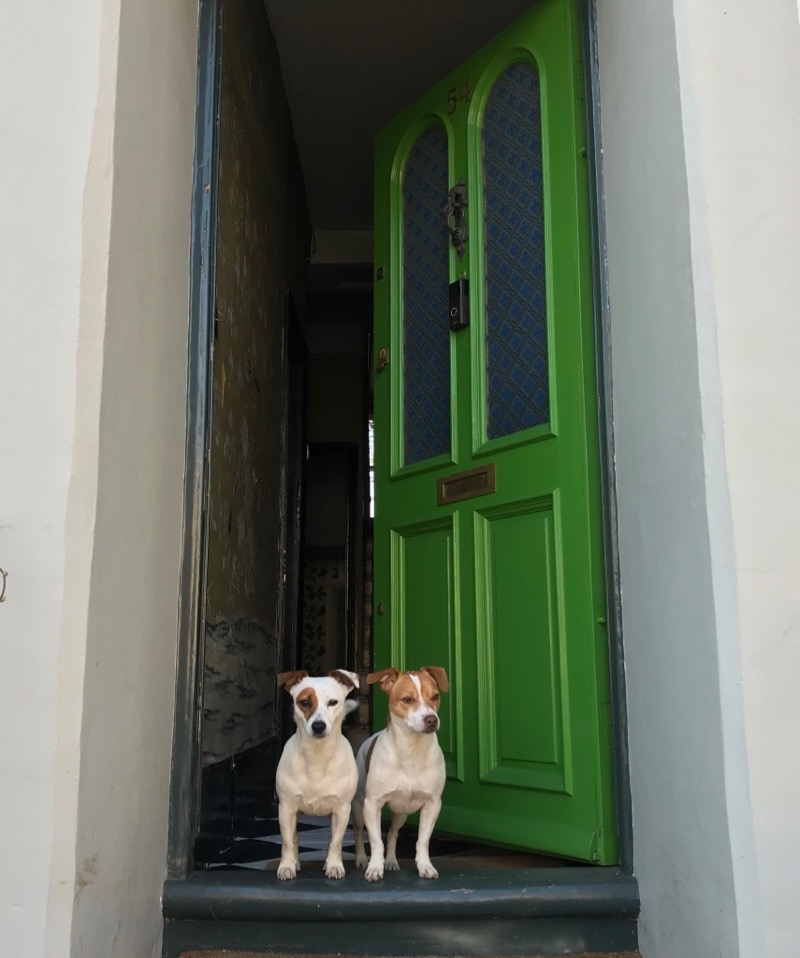 I had always wanted my own front door after years of renting flats in shared building. The first flat I bought in Battersea had the worst entrance known to man, it was an ex local authority building, council flats to you and me, built in the 70s. It has a urine stinking entrance hall and a death trap lift.
But it did make the cover of The World of Interiors, thank you for asking. [Jack and Jill. See below] 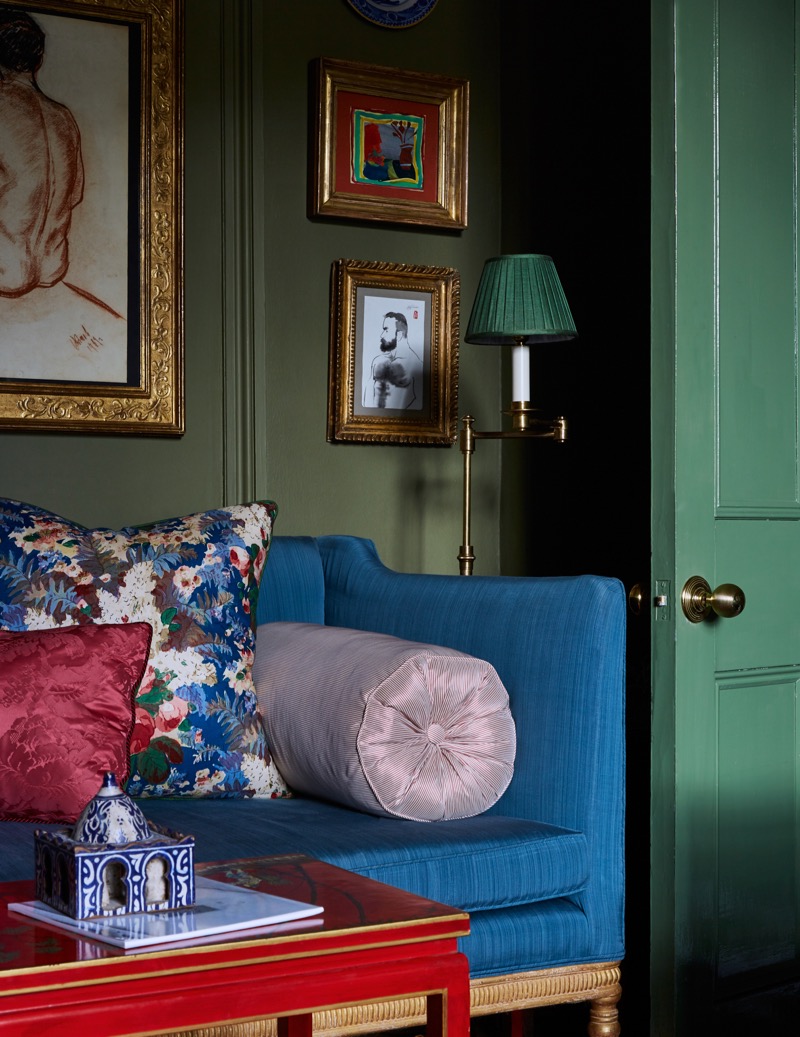 This house was my dream come true, steps up to the front door, originally 2 bedrooms with double sitting room on the first floor with a large connecting door, which I jig-sawed in two. Fireplaces at both ends with views over the back garden and all original sash windows, no shutters sadly. 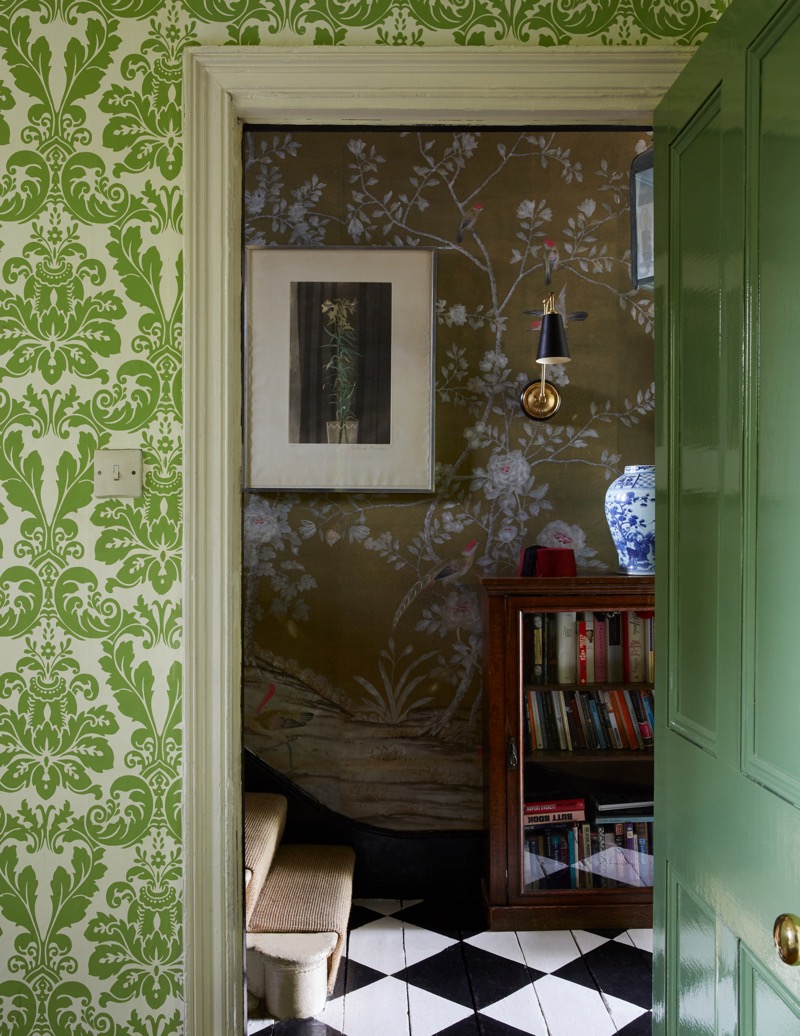 I was working for Min [Hogg] as a stylist at The World of Interiors at the time when I bought it. So I was constantly bombarded with beautiful wall papers and fabric, most of it way out of my budget. I loved (and still do) hand-painted Chinese wall papers and would beg De Gournay to lend me drops for my shoots.
I can’t quite remember how it came about but after a great friendship had evolved with De Gournay they offered to paper my entrance hall, so they could shoot it, shut the back door!
The rest is history, I still have this stunning dusky green background wallpaper with off white birds and coral details, it’s their Earlham design.
Totally too smart for my hall but looks amazing and I love it daily. 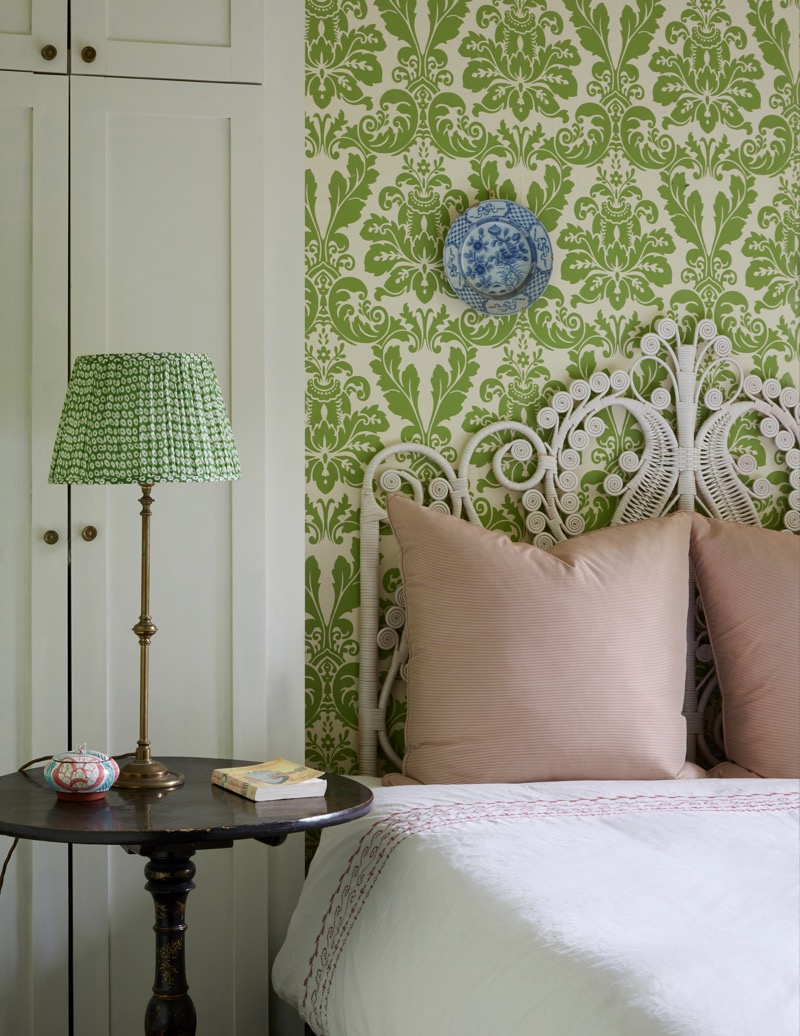 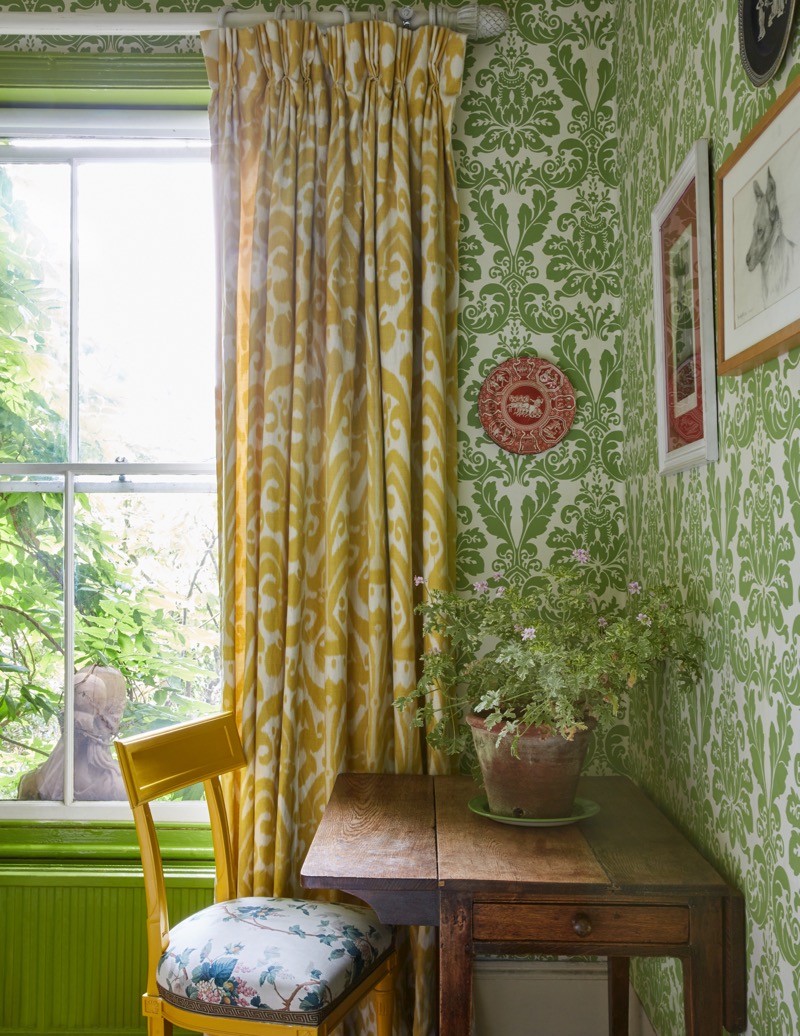 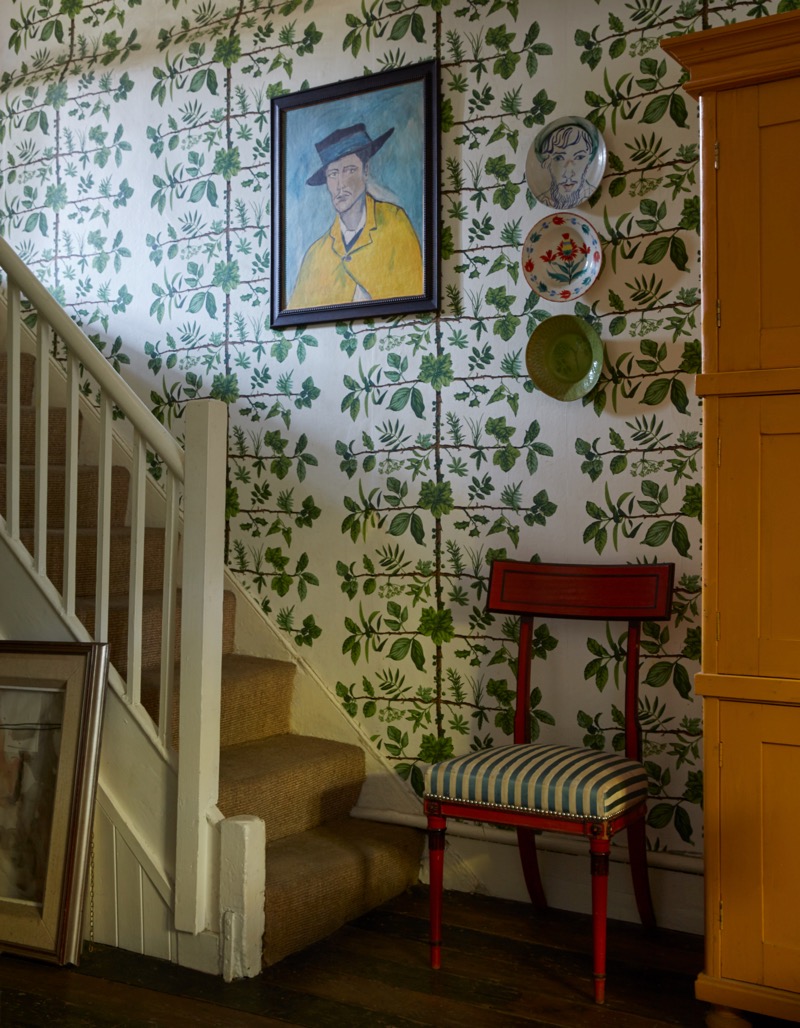 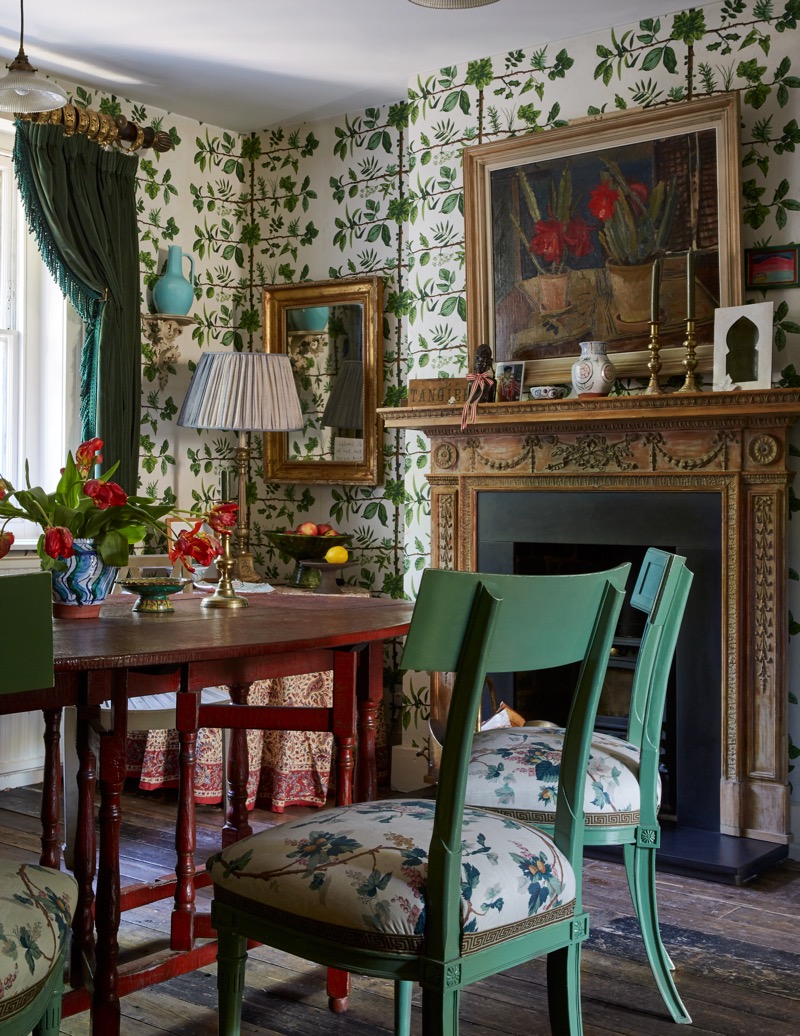 Wallpaper is an addiction, once you’ve tried one you need more and more. Most of the house is now papered. [The ‘too-grand’ Colefax and Fowler kitchen chimneypiece] 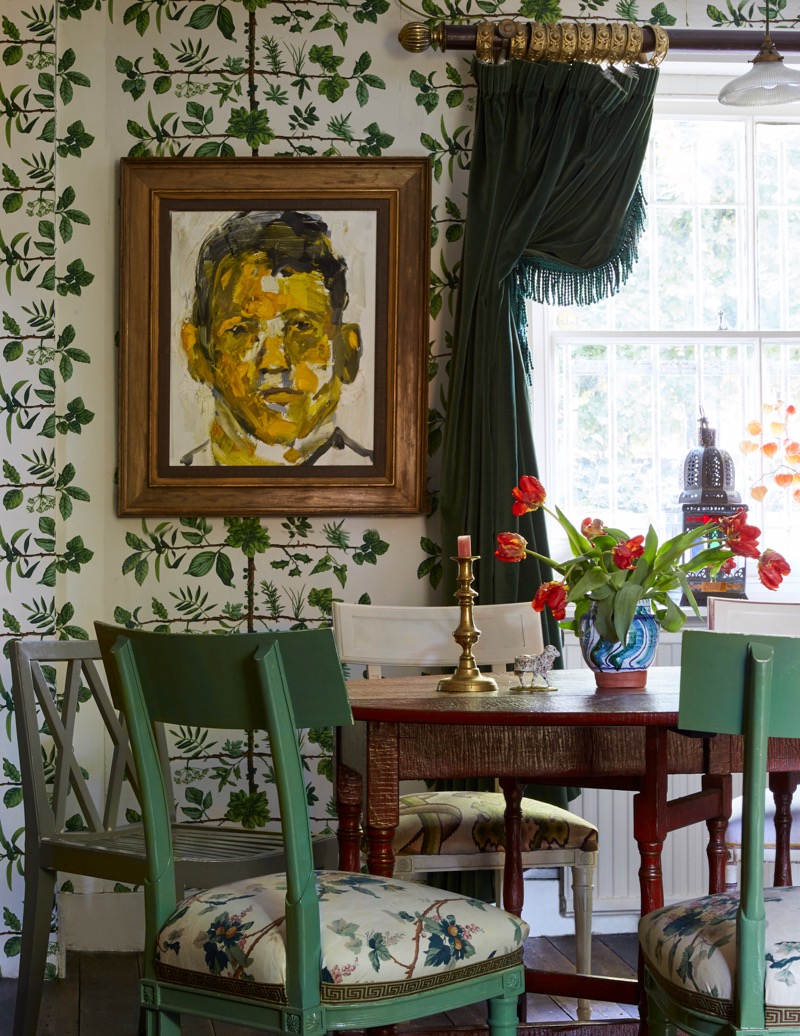 The kitchen has a Pierre Frey paper called Espalier, which is of twigs and herbs espaliered across it, it creates a kind of trellis illusion, its become another top favourite. 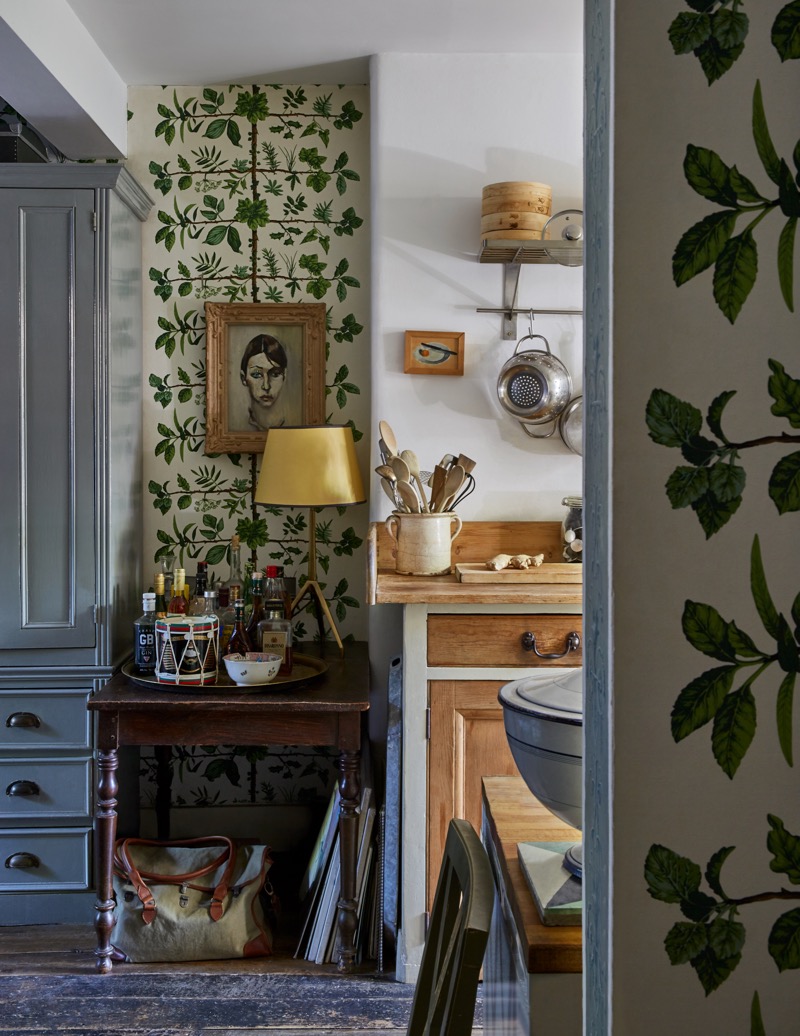 I was in Pierre Frey on the Fulham Road before it moved years ago, when a lady came in waving a page torn from The WOI with my kitchen on it, she wanted the same paper, I was quietly thrilled. 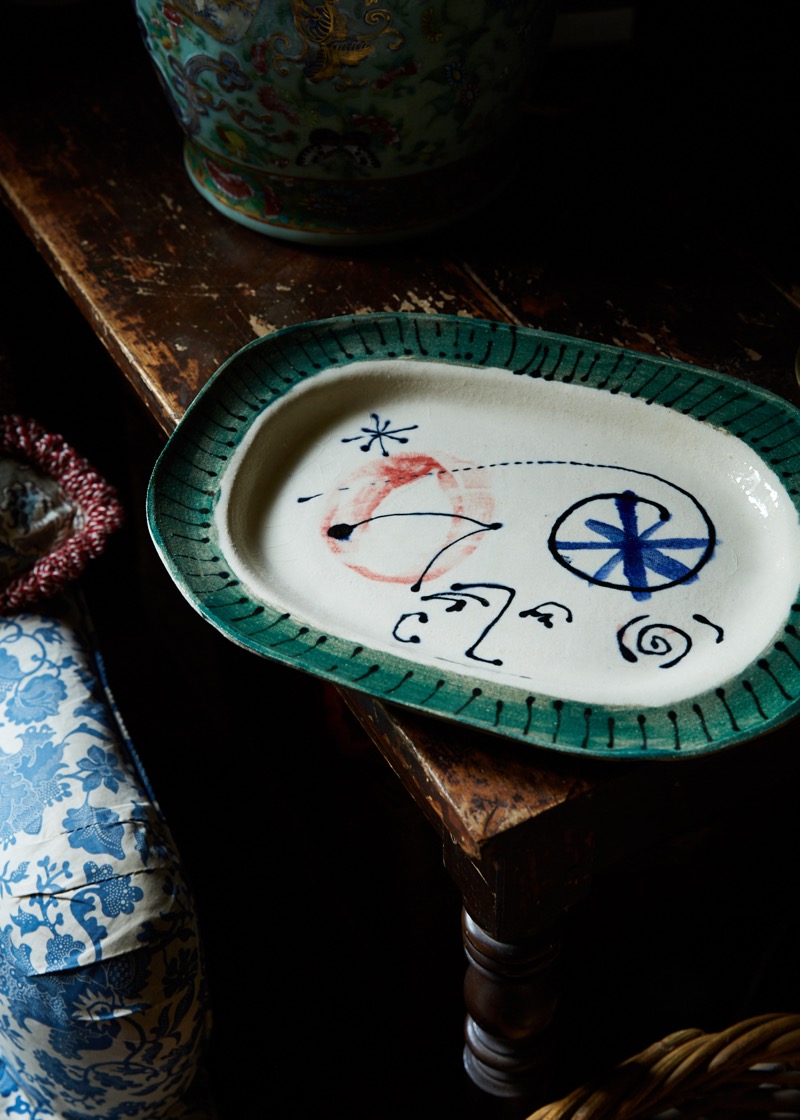 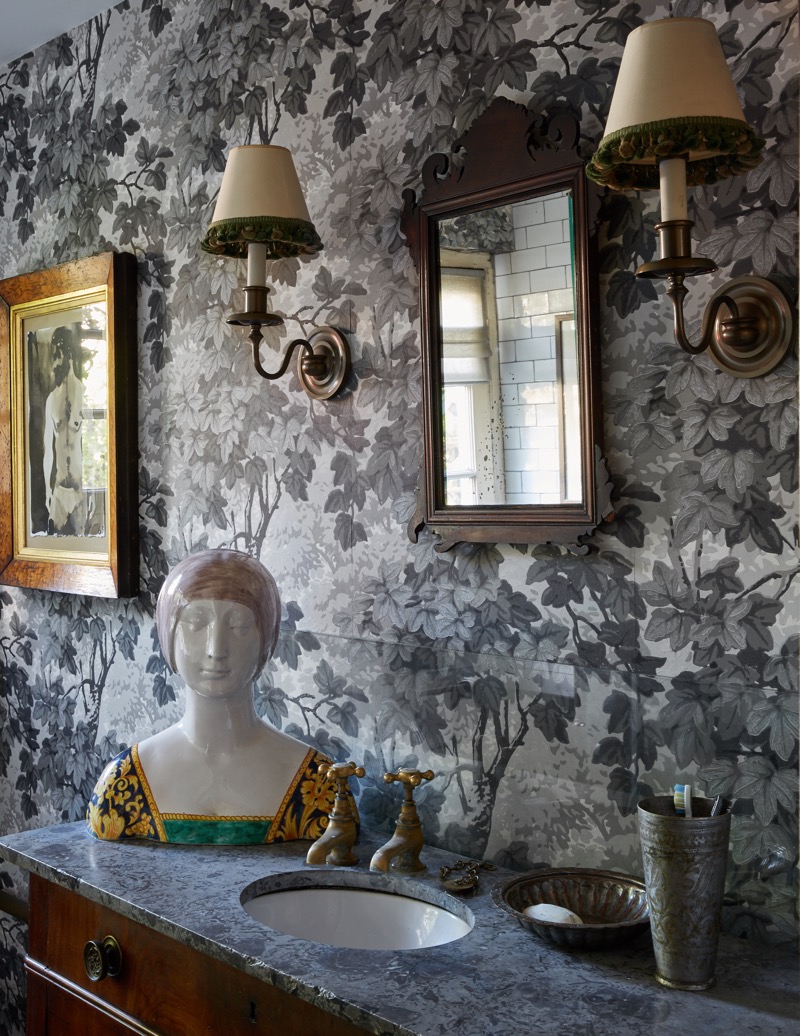 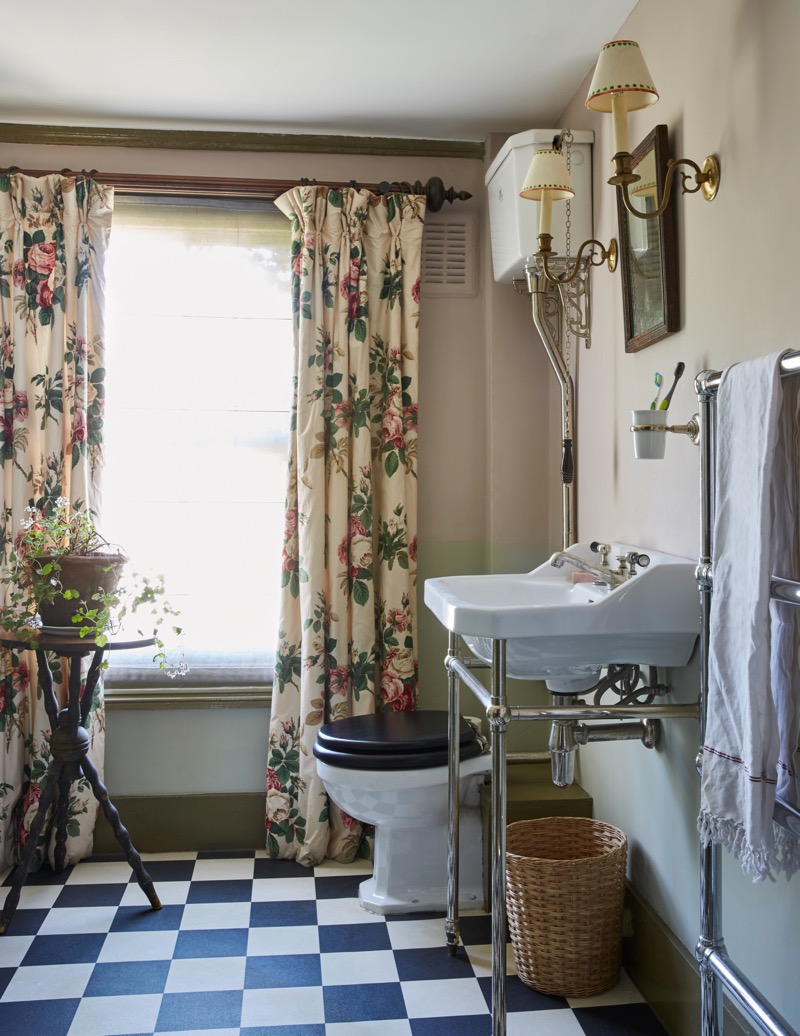 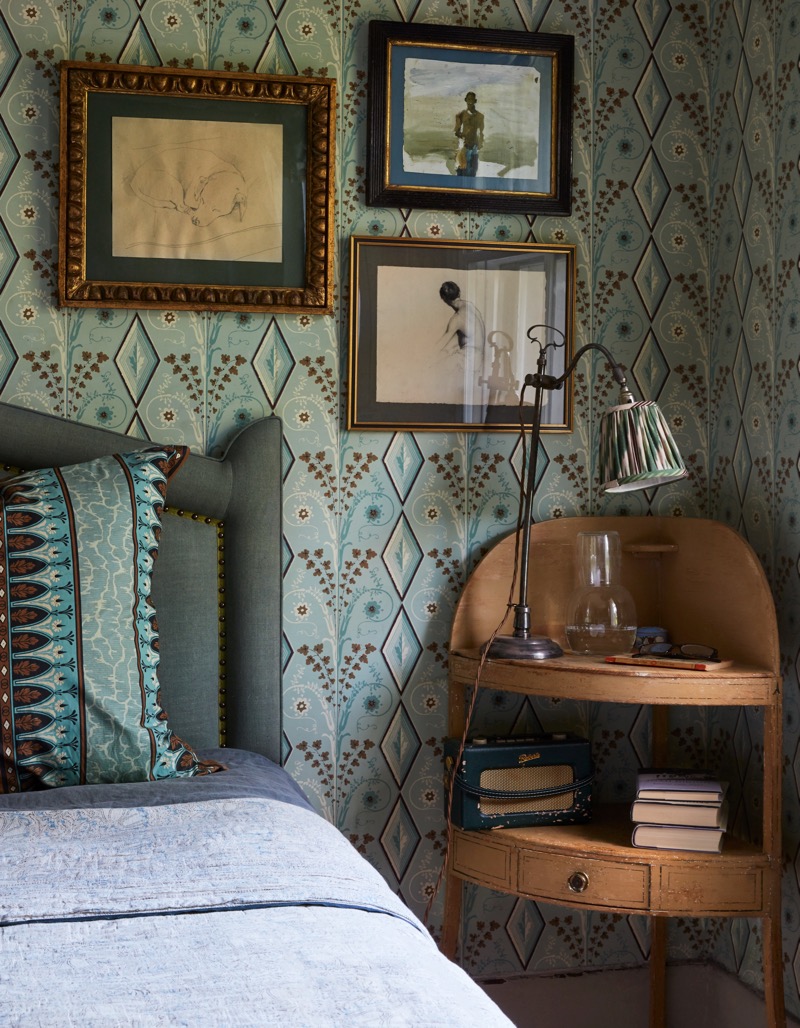 From our bedroom, which is at the front of the house with two sash windows overlooking a council estate – which when I first moved here was very lively – I would often see blue flashing lights on my ceiling at night and hear the coppers racing around trying to catch god knows who.
One day I’ll never forget someone knocked on the front door, I opened it to 2 police men both looking very formal, oh shit what have I done?
One of them – I can still picture him clearly as I had a major schoolgirl crush – he was a red-headed bearded god in uniform. I’ve Just checked my phone to see if I still have his number, I can’t believe it, Darren was his name.
Sorry get back to the story.
They asked if I would be OK for them to set up a stake-out post from my bedroom? Darren clipped his camera to my Madeleine Castaing stiff tasselled pelmet, focusing on a phone box over the road with a box on the floor recording every minute, sadly marmalade hunk wasn’t going to man the camera 24/7.
He did visit regularly to take away the footage and replace the tape. We would chat as I sat on the bed, it was quite surreal. I hope he enjoyed my bedroom wallpaper, which I gaze at more than any other paper in the house. 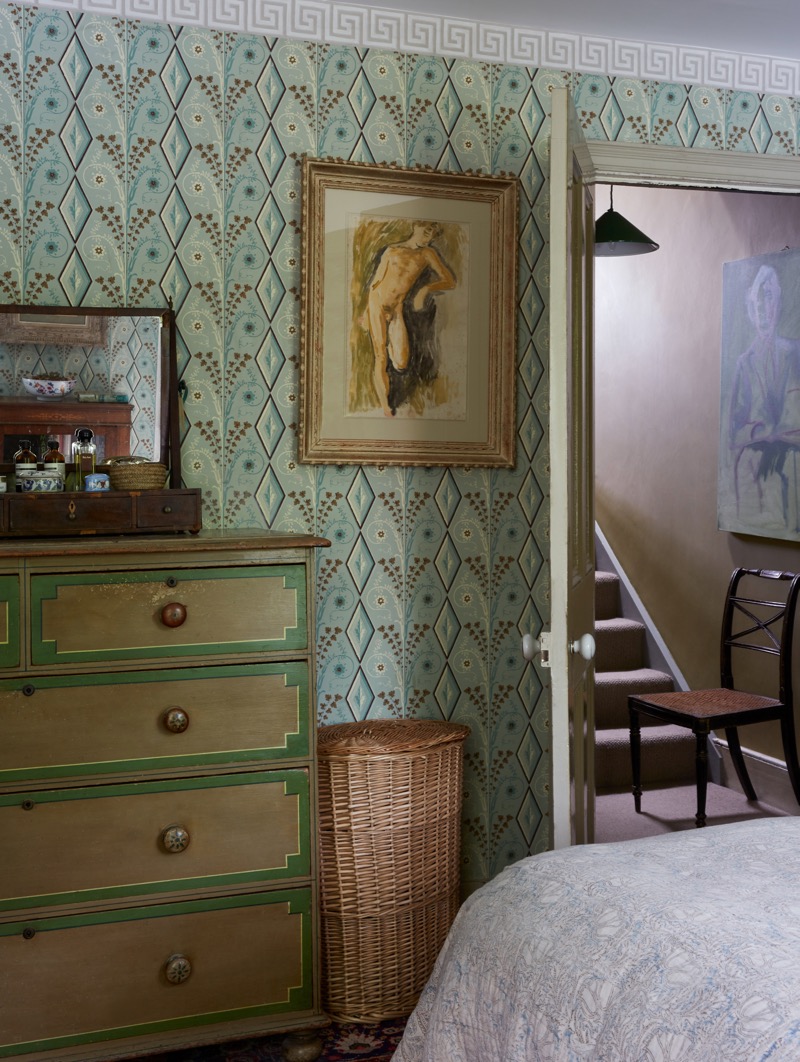 It’s from Brunswig and Fils and it’s called Gallier Diamond, I think it’s one of the most perfect design repeats.
Firstly, pale blue and chocolate brown together is a colour combination sent from the gods and the mix of geometric diamond shapes, natural sprigs of foliage and – to top it off – a classical curlicue which I’ve always been drawn to, creates the perfect rhythm and design.
The curtain fabric I mentioned earlier is in the same colour combo! I think of it as a Gauloise fag pack blue which Min would chain smoke in the Kings Road office before we were moved to Vogue House. 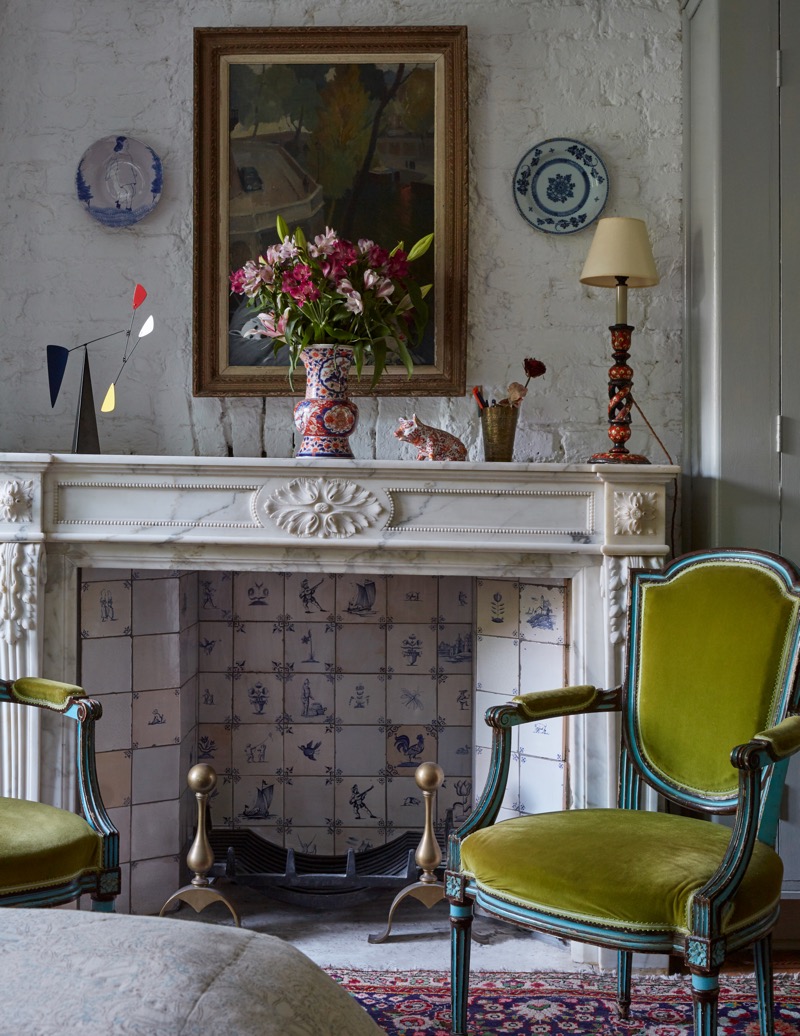 The overly grand marble fire place in my bedroom was a lucky freebie. I’d advised  a client with a stunning house in Kensington that is wasn’t correct or quite good enough for their dining room, so I replaced it with a stunner from Jamb. At the end of the project I found it  piled up in pieces, ready for the skip, so, doing the right thing I adopted it and had it installed in my bedroom and commissioned the Delft looking tiles from Douglas Watson, who’s brilliant. They all have a different background colour so they look original.

It seemed like the right time to get more dogs. We’d had to put down our last heavenly creatures, Boris and his girlfriend Loulou (they’d both reached very good ages). I’ve always loved Jack Russells, so the hunt was on.
I didn’t want puppies to house train and I feel it’s good to adopt dogs that need a home. We found the perfect couple. Both Jack Russells, 3 years old and living together. Not actually related, and we were told, that they had had puppies. together
The boy is called Jack and she’s called Jill. I’d had fantasies of giving them both delicious names, Ottoline, Anastasia, Igor, I seem to gravitate to Russian names. But out on our first walk, I needed to get Jill back in line, so screaming Anastasia didn’t wash, as you can imagine. So Jill it is, and I’ve fallen in love with her and her name. Jack’s such a Jack, so perfect.
The collection of these two turned into a bit of a saga. They lived in a housing estate in Bradford, 4 hours drive north of us. So off I went, stopping for a night in Manchester for the fun of it, then in the morning, sat nav set the final leg. I remember getting slightly nervous as I entered the cul-de-sac, but as I turned the corner I could see two Jack Russells perched on the back of a black leather sofa looking out of the window. The meet and greet was no fun, as the previous owners were still in love with them but they couldn’t cope. Workloads and manic pups. We sat on the floor and Jack licked my face and Jill wanted her tummy rubbed, nothing has changed in this department.
I asked if I could take them for a brief walk, just to be alone with them, so off we went. I then put them in the car before going back into the house. I had a box of chocolates for the owners, we hugged and exchanged cash and off I went.
They have turned out to be the nicest sweetest, friendliest dogs one could have wished for. I send the ex-owners photos and videos now and again. She told me she cries with joy. 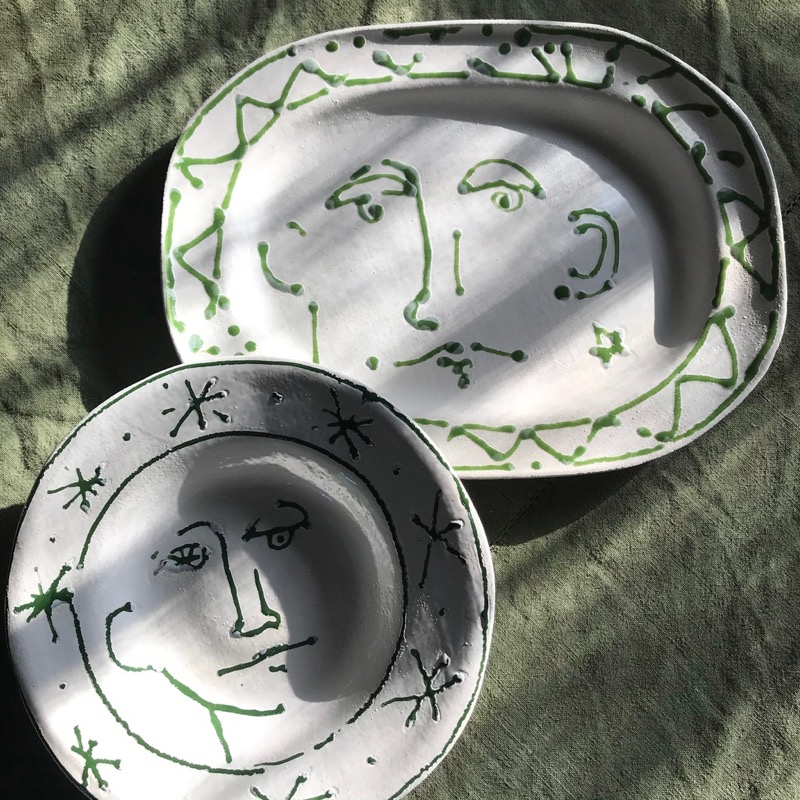 GH’s hand thrown plates for sale in his shop

My other habit is paint, the house has been a great canvas to experiment with colour.
The entrance hall floor I painted by myself on my hands and knees black and white checker board, old floor boards look great painted in this design, especially in an entrance. I’ve used the same idea in a few clients’ houses. One of my latest colour moments I’ve added, is the tobacco ceiling in the sitting room!  Think old stinky smoke-filled pub ceiling, it’s that colour. Once you’ve had a painted ceiling you can’t go back. 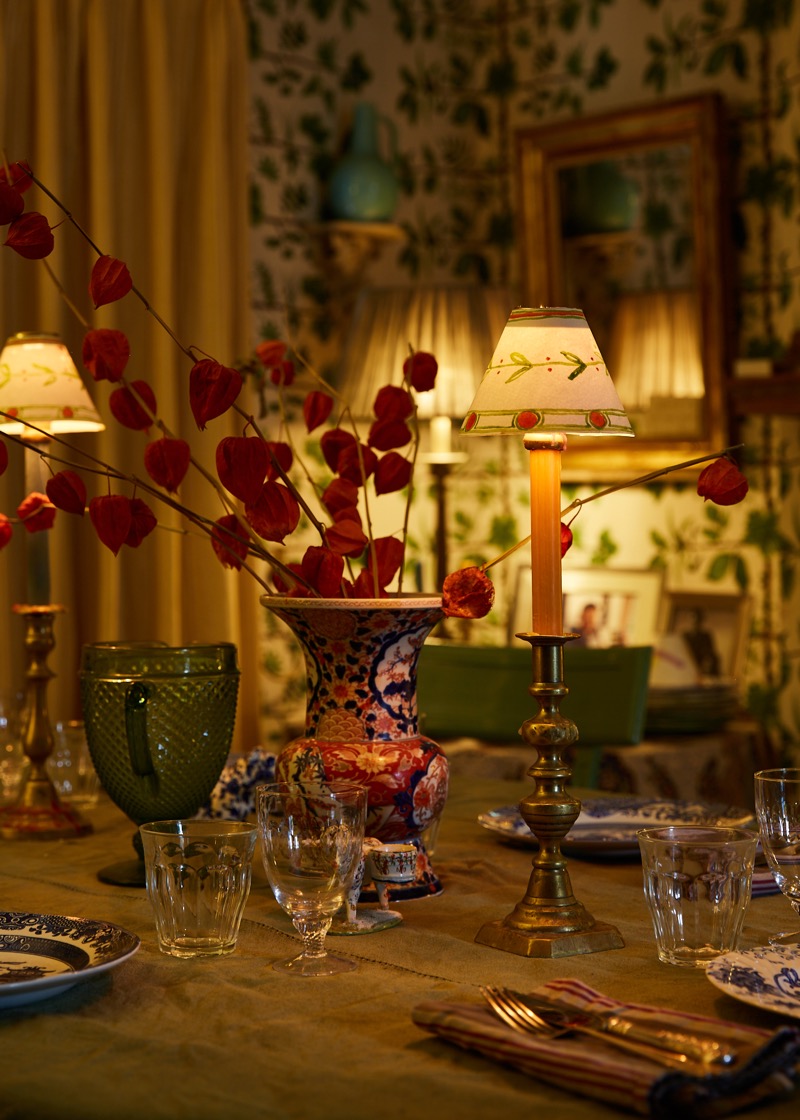 For all the places to be, my Stockwell house is up there for me surrounded by pattern, colour and the ghost of Darren.

Thanks to Gavin, Boz, Darren