David Bridgwater wrote to me a few weeks ago. He had read the art book that I published with Yale, Owning the Past, about the English collectors who scoured Italy, Greece and Turkey for antique sculptures in the eighteenth century and brought them back to furnish their country houses. He said that he had quite a nice house in Bath, and a special interest in eighteenth century English portrait sculpture. He suggested that I might like to visit. Three weeks ago I did.

David is a historian cum dealer, who buys beautiful things whenever he finds them, to keep or to sell. But like me, he has a prodigious interest in the provenance of every object that he finds. A lot of his  time is spent reading, researching and traveling in order to build up a backstory or identify the artist-creator connected with what he finds, and what he knows is published on his two blogs, one about eighteenth century portrait sculpture: https://english18thcenturyportraitsculpture.blogspot.co.uk   and the other about the architects who built the houses and streets where he lives  – https://bathartandarchitecture.blogspot.co.uk/   This is the entrance hall of his townhouse in Bath.

David and his wife Sarah came to live here 8 years ago, moving from a slightly older house a few streets away ( their two children are both grown up). This house, dated 1792 and designed by Thomas Baldwin as part of the Pulteney Estate, ranks among the finest of Bath’s very elegant Georgian housing stock. According to a bronze plaque on the facade it was home to William Pitt the Younger in 1806 – the longest-nosed of all the English Prime ministers by far. Here is their fabulous high-ceilinged kitchen.

The house’s previous use had been as offices.  ‘When we came here all this was smothered with two centuries of paint, it was three years on and off putting it back together. Nothing could have been done without my wife Sarah. There were strip lights like these everywhere. We left these ones. You can see what you’re looking for!’  (You can see one reflected in the looking glass)

Industrial double sink unit with the dog bed belonging to their small hairy Griffon Bruxelloise Lulu, who is keeping well out of shot 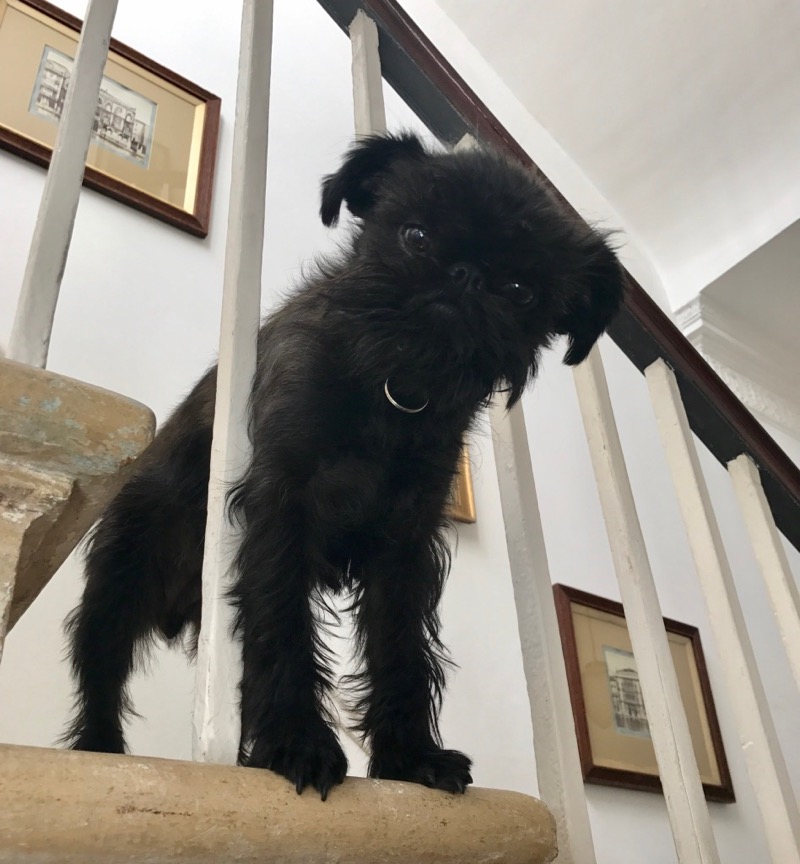 This kitchen is gloriously big.

Each piece of furniture stands about 10 feet apart from the others.

‘When we lived in a 1760s house in Walcot Street the kitchen was in the basement, so I stripped off all the old wallpaper and there was the silhouette of the original kitchen dresser marked on the wall. So I had this dresser made to measure, specifically for that wall.’ Now it does service in the Dining Room. 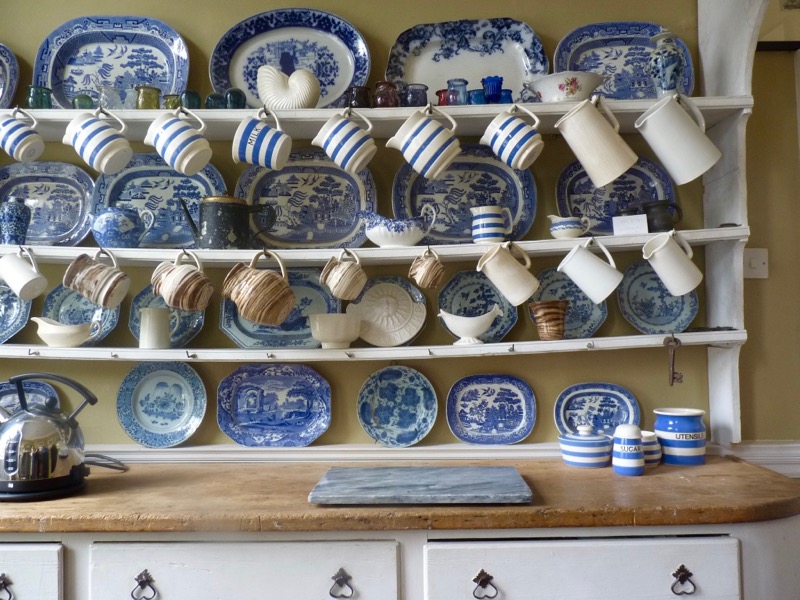 The Dining Room, plaster bust of William Pitt the Younger on the left.

The chimney piece has a garniture of Wedgwood flower vases, the two-handled urn shape favoured by Constance Spry.The big one on the far left is not by Wedgwood tho. I particularly liked it, David didn’t.

These fabulous garden chairs, now heavily weathered, are actually copies of an antique original. They were sold long ago from the famous Clifton Nurseries in London’s Little Venice, where self-styled ‘Master Plaster Caster’ Peter Hone managed the business dealing in fabulous sculpture and garden antiques. (David Bridgwater ‘got into gardens back in the 80s’ too.) There are a few of Peter’s plaster casts here amongst much older things. Peter says  he’s taken more casts than a ‘Pea podder has podded peas in a pea podding factory’. You can buy his casts from Pentreath and Hall, and see their ‘Hone Museum’ of casts filling the back wall of the Rugby Street shop.

A fabulous piece of  eighteenth century Bidriware from India in the middle of the table, the base of a hookah pipe, inlaid with a silvered design of poppy heads.

One of those old fashioned push-along machines for marking out white lines on a grass tennis court. I used one of these as a child to mark to paint white lines  onto the lawn in the garden at home but my badminton game remains sub-average.

écorché figure, top right, modeled for artists, showing the muscles of the body as if revealed under the skin.

And a small but very fine Renaissance-era portrait tondo

One of my favourite things, Damascus-style folding chair, one of a very beautiful pair.

The first floor drawing room.”All the paint is from a company called Johnsons, they will copy any colour you like.’

Household gods. A marble statuette of our first Hanoverian monarch, King George I, small marble bust (sans socle) of Alexander Pope, Ganesha the lucky Elephant god and a bust of Athena. ‘ I bought my first bust of Pope back in 2000. I went to the V and A they said,  Oh its C19th, there’s hundreds of them. I found an engraving of it from 1788, it couldn’t have been any other bust. It was by Roubilliac.’

More busts, Napoleon in the middle.

‘An architect’s stand up desk from around about 1760. My favourite thing, found in a warehouse in Newark, it had been there for quite a long time.’

Around the corner, the very best room of all, a genuine cabinet of curiosities ( that over-used term).

The walls are unrestored with bare plasterwork in places. The object on the floor is an ancient, lethal. two-man hedge trimmer.

Back in the 70s I used to go to France and fill a lorry – bring stoves back, and I’ve got one or two souvenirs left from that time.’

The textile wall hanging is Nigerian, it was £3, I found it in a car boot sale. They look like aliens! I’m going to put it in that frame, it’s French C17th, I like that dynamic, to put a bit of Africa in it’

This cross-piece from an overmantle is decorated in papier mache with a scene from a hunt, hounds chasing a fox in pursuit of a hare ‘Unfortunately someone had a go at it with paint stripper. I picked the rest of the paint off it but the elegant face of the fox is gone.’

The fire surround is Scottish.

‘I took off the paint – it was so thick with paint – but left a bit here, to show what it was like when I got it.’ The figures at the two ends are Bacchus and Ceres. Perhaps it was made for a Dining Room? The china swan was a wedding present from a friend.

‘The bookcases are made of piled up apple boxes  – you could buy crate loads of them at one time.’

‘The staircase didn’t look like this when we moved here – it was festooned with wires and covered with industrial carpet.’

View from the master bedroom to the dressing room

Dressing room. The leather upholstered button back chair is French. Wall of mirrors.

‘This shower  – a friend of mine had it for his house and didn’t want it.’

David told me there was something particularly good about this light fitting but I’ve forgotten what, alas

‘Ive always like dealing with dealers,’ David told me. ‘I tried to anticipate fashion. That’s why I got into gardens back in the 80s, that last area of the great house that hadn’t been fully exploited.’ He showed me a koftgari ware box – damacened with a fine pattern of gold inlaid into steel – a very beautiful thing, made to hold a maharaja’s cigars, perhaps. Where did all the good stuff that there used to be – in every junk shop and street market  – go? I wondered. ‘I think it all went to America,’ he says.’

Did you collect things when you were little?  ‘Birds eggs, cigarette cards, chewing gum cards, that sort of stuff  – and of course I swopped them.’

Just inside the front door, a very handsome hall stand. 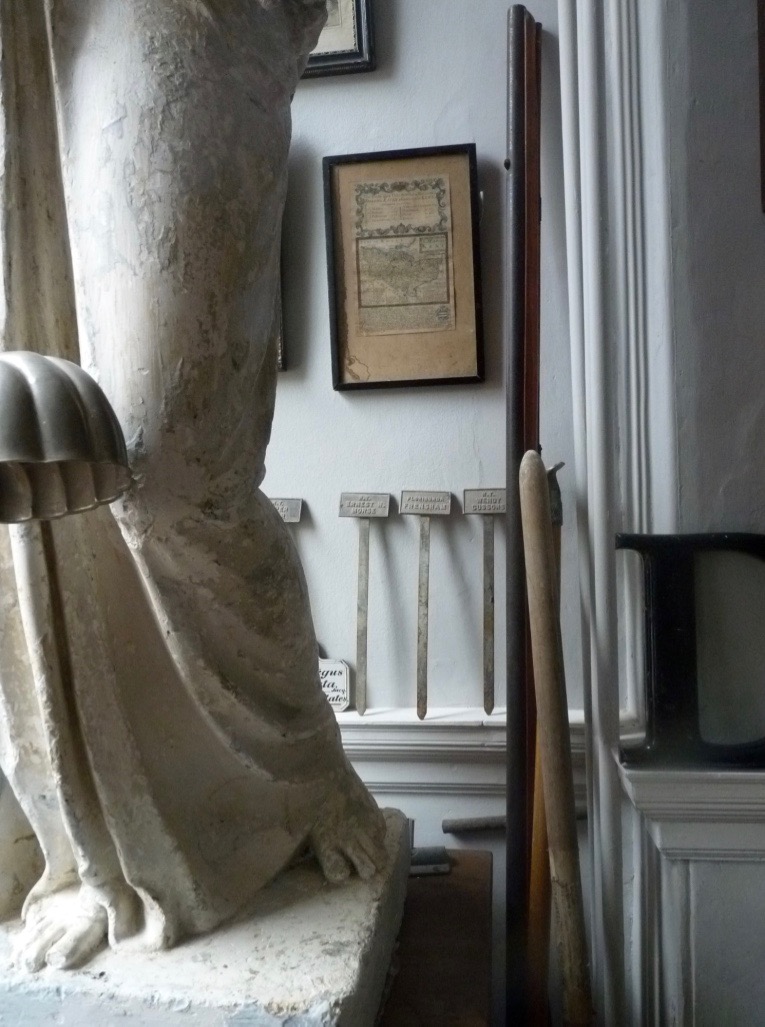 Very many thanks to David and his wife Sarah. David is on instagram too. He is a huge source of interesting knowledge and enthusiasms and so I offer this a as a sort of pictorial encomium to all that he knows.