Back to the Drawing Board: Pat Albeck. 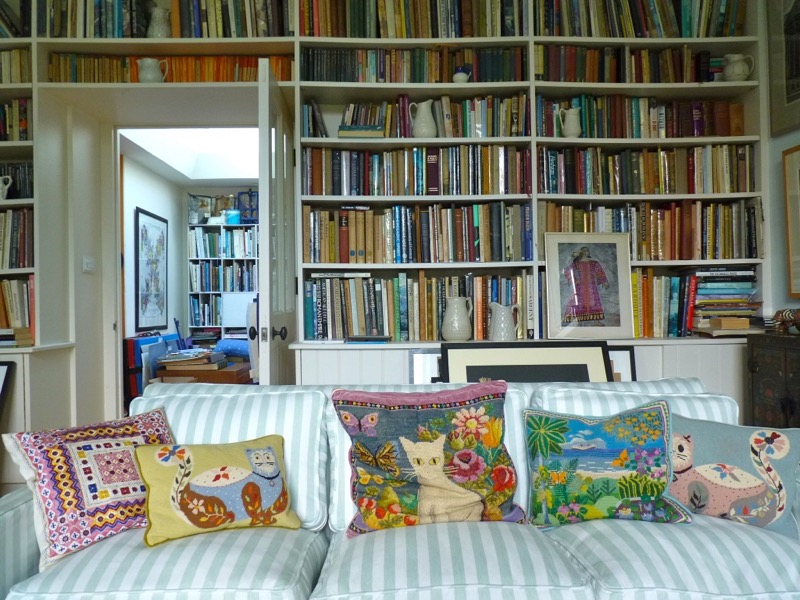 In the autumn of 2016 I visited the artist and renowned textile designer Pat Albeck in the Oxfordshire gate lodge where she has lived for about four years. She came there with her husband the acclaimed stage and costume designer Peter Rice (who died in 2015), leaving the family home near Aylsham in Norfolk. Before that, the couple  – who met as art students at the RCA –  had lived in London with their son Matthew Rice, now a brilliant artist-designer in his own right and married to Emma Bridgewater, the founder of Bridgewater Pottery in Stoke on Trent.

‘Matthew and I are quite often at loggerheads taste-wise,’ says Pat. ‘When we reached 80 each, Matthew thought it would be a good idea if we were nearer, so we packed our bags and followed him here. It’s very clever, Matthew designed it, it was a poky little cottage but he added another floor for Peter’s studio, and my studio and the living room.’

Beneath the large topographical print of a country house in the hall is a more modest painting of a house in the border country  by Charles Oakley(d.2008).

Looking from the hall into the garden, orange watering can hand bag on table.

Pat Albeck’s little picture of her young son Matthew Rice, painted on holiday in Nassau, and more two cat paintings: the first an Xmas card from Julian Trevelyan, the second of swimming cats a ‘Collins’ from Mary Fedden thanking for the invitation to the first night of one of Peter Rice’s productions.  Apples just picked from the abundant garden.

Kitchen work top and kitchen table beyond. Above the table hang two student works, prints by Matthew Rice executed at the Central School of Art.

One of Pat’s rag dolls, a pyjama case.

Jug collection, two mackerel on a plate by Richard Bawden, and our morning coffee. ‘These flowers are from what I call the Glyndebourne border.Whenever I’ve moved house I’ve always had a Glyndebourne border. Peter’s first job was at Glyndebourne and I’d never been aware of how wonderful gardens could be.’

‘In my life I’ve always felt different from everyone else.I was very upset when I was about 10 that everybody in the area had pale green or maroon stair carpets, and we had some most extraordinary ones that my father had had woven at Libertys or something.’ Her father, a Polish emigre, was a furrier and an anarchist. In 1933 he had built his ‘Dream House’ at Anlaby, just outside Hull.’It was Art Deco inside, with a “Stockbroker Tudor” exterior. The house was built in the grounds of Tranby Croft. Our front garden was part of their woods. Tranby Croft was known for the famous Baccarat scandle in 1890 involving the future King Edward VII… I had a stained glass surround to an electric fire in my bedroom. It represented Little Red Riding Hood and was designed and made by students at the Hull Art School.’

At the age of 16 she began four happy years of study at the College of Arts and Crafts in Hull.  ‘ The ambition of all art students at the time was to go on to The Royal College of Art. It was the idea of living in London and working with the best students from all over the country that made the thought so exciting. Well, I made it, and so starts the 50’s.’

In the large sitting room an architectural print by Edward Bawden, a poster designed by fellow RCA student David Gentleman  a small portrait of Pat aged 21 by Alan Price and over the chimneypiece, Envelope by Joe Tilson R.A.

Sculpture bought from a student degree show at the RCA, Flower painting by Mary Fedden. ‘I lived opposite Mary Fedden in Hammersmith. Her cousin Robin who was a director of the National Trust had asked her who could design a tea towel for them and she recommended me, they got onto me and I designed for them for over 30 years!’ The little cat sitting on the frame was made by Mary too, ‘they were presents that she gave to children.’

Above the Empire bureau hangs Fern Garden at East Ruston, a large early paper collage by Pat Albeck of the hellebore wood in Norfolk at her previous house, ‘a wonderful garden, my favourite place in the world.’ On the left, two family portraits painted by her witty friend the artist Harry More Gordon, whose house appears here in an earlier blog highlighting the work of his artist daugher, Domenica More Gordon.

‘In the bottom portrait Matthew is reading a copy of The Field, but in the 10 years between those two paintings he had left home. The beautiful rug I’ve got my foot on was in my nursery, I’ve still got it.’

A table lamp by Cressida Bell and behind it a seaside scene by Julian Trevelyan. More Mary Fedden cats.

Landscapes in pen and  watercolour by Matthew Rice made at the age of c.15, the result of a private commission to paint Venetian scenes hang in the yellow bedroom.

A tour de force still life by Pat Albeck, ‘when I started painting instead of designing, and had a show at the Chelsea Arts Club.’

‘I had started doing water colours in the 80’s and 90’s just because Peter and Matthew were always painting and I felt left out. I had always drawn and painted in my sketchbook for design reference, but this was the first time I had done actual pictures. I started using a water colour box, which I had never done before. I had used all kinds of media but never a watercolour box. So this prepared me for lots more painting, which I have been doing ever since.’

‘My life used to be completely full of cats and if I had my life again I would make sure that I got my cat situation better organised.’ Cats by William Chappell, ‘who was a friend.’

A crop of works in progress from her new style of ‘cut paper paintings’ on Pat’s drawing board.

All done directly from life, from flowers and onions growing in the garden,

Part of her archive of textile designs (more of her design archive is held by the Victoria and Albert Museum). ‘My first job in the 50s was working for Jimmy Cleveland Bell. Peter [Rice] was working in the theatre and I was in fashion. My boss was quite unusual, he let me do anything I wanted. He said, ‘You’ve just been to Venice on holiday. So I designed a pattern inspired by the fish market there.”’I had too much work towards the end of the decade. I decided then to have an assistant to work with me. This was the start of a series of amazing girls who worked for me, each staying with me for about a year. My first assistant was Susan Collier who later created the textile company Collier Campbell. Most of my assistants came straight from their degree course at art school. They have nearly all gone on to greater things.’

‘I have designed two or three hundred tea towels.’

‘Before, tea towels in England were plain, except occasionally when they were designed for advertising, eg Colman’s mustard, or they had “Glass Cloth” woven in a primary colour stripe down the middle. There were all these new products waiting to be decorated.’ (This picture copyright:Back to the Drawing Board/ Keele University.)

‘This was a design I did in the 60s. John Lewis suggested I did them a William Morris design, and I said, I don’t copy things but I can do something inspired by him. ‘Daisy Chain’ is not quite what they wanted, but it was their ‘Best Seller’ for 15 years. Each year I produced new colourways. It was used for countless different things, plastic coated for tablecloths, laminated into trays, made up as skirts, oven gloves and eventually, in the brown colourway, into dog cushions. For the National Trust I did something much more Morris-y for William Morris’s house.’

Dining Room. Large collage by painter–poet  Sophie Herxheimer, bought by Pat Albeck, ‘because I liked it so much.’ 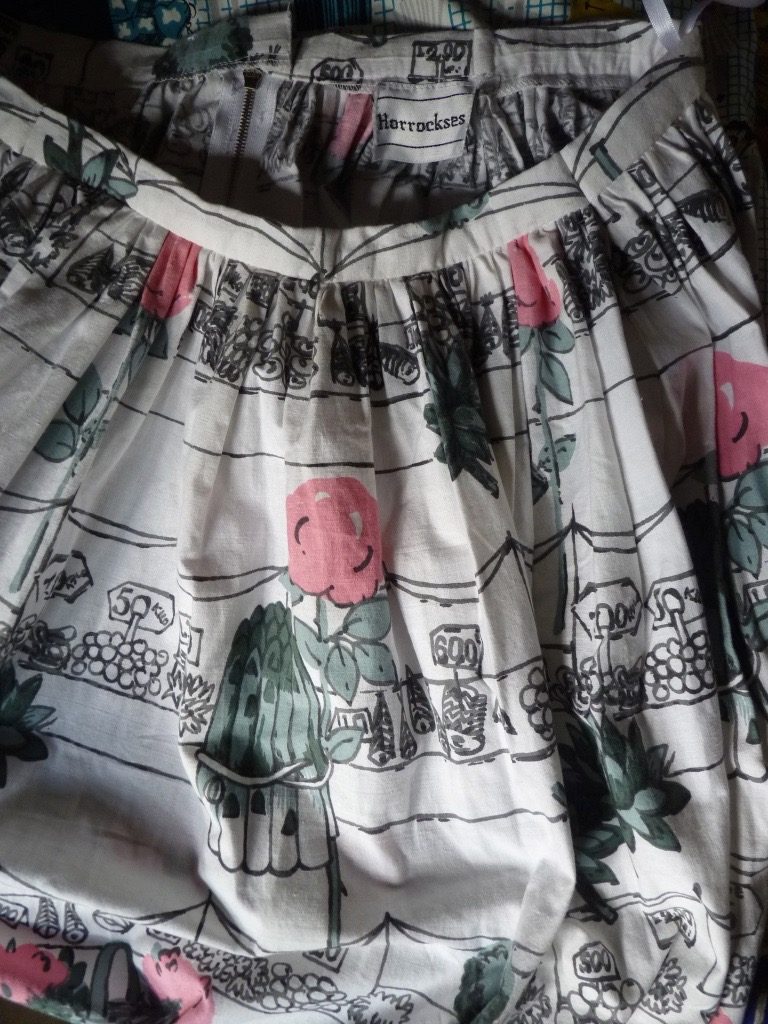 ‘A friend of mine discovered an old 50s Horrockses skirt of mine on ebay. I did it in ’55. It cost me £70 to buy on ebay.’ The Venetian fish market-inspired pattern. For more of her wonderful patterns from the 50s click the link here :

‘When I was at Horrockses there was an exhibition of a stage designed called Sophie Fedorovitch at the V and A, she had just died. I was commissioned to design some fabrics based on her costumes, I rather enjoyed it, they were done on arithmetic [graph] paper in the mid 50s, Madame Butterfly.’

A  designer stuck together a lot of my National Trust paper bags and used them as a backdrop for the Stephen Sondheim musical,  Into the Woods.’

‘These belong to Lanhydrock, my range of earthenware ceramics made by Portmeirion for the National Trust in the 1980s. They turned out looking very modern. It’s my very, very favourite design that I’ve ever done and that I still use, based on a border of tiles in the kitchens at Lanhydrock.’

Wrapping paper and wall paper designs by Pat Albeck. ‘Domenica More Gordon worked for me briefly after art college. I asked her to design wrapping paper, she didn’t know what I meant, ‘We always use newspaper,’ she said!’

‘I drew these very, very carefully, they are early sample designs. I was about 23 at the time.I worked differently for the pottery industry in Stoke on Trent. Because it was expensive bone china like Minton and Spode and stuff, I felt it had to be very beautifully carefully drawn. I really enjoyed doing it.’

‘Two tea towels were designed by Peter [Rice] for the National Trust, they wanted something architectural, that was one, the other is the story of wool. Pansy is one of my furnishing fabrics for  John Lewis. When felt tips came out I fell madly in love with them, ‘tho everyone was very superior about them.’

National Trust tea towels from the 1970s. ‘I used acorns, oak leaves and oak apples to design this Tea Towel for The National Trust. The acorn is The National Trust’s emblem. I was designing things that people might be tempted to buy at the end of a visit to a National Trust house or garden. This influened my style. I was using line drawing as my work became more representational and my colour became more muted, to go with the historic houses. Also it meant that I really had to learn to draw buildings accurately. Many of my designs were for specific properties, which I always visited, so I got to know a lot about the English countryside.’

Keele University’s forthcoming exhibition program will feature Peter Rice, Matthew Rice and Emma Bridgewater.Pat Albeck’s next selling show ‘A Cut Above,’ will be held at Colefax and Fowler’s new showrooms, opening on the 22nd of May to coincide with the Chelsea Flower Show.